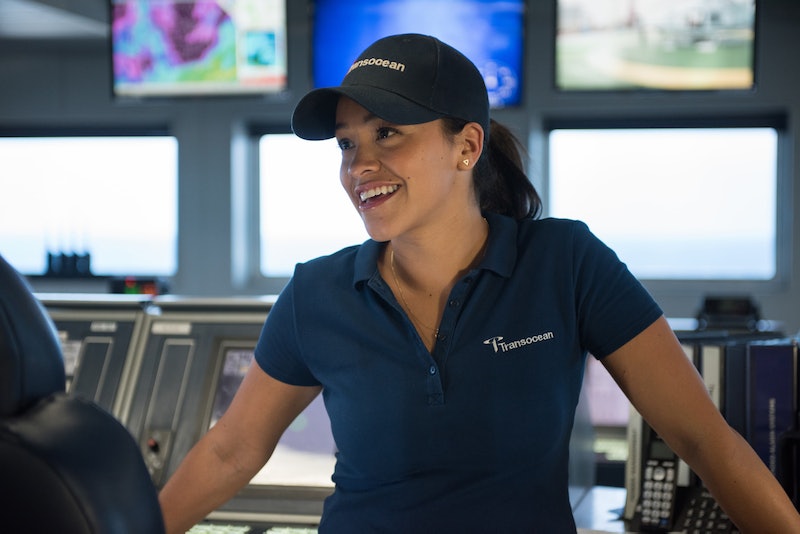 It might be hard to believe, but Gina Rodriguez has never been in a major Hollywood film before. Before becoming a full-fledged star upon Jane the Virgin 's premiere two years ago, Rodriguez mostly acted solely on television, with a few independent films peppered in. Now, though, as her first major film, Deepwater Horizon , hits theaters, Rodriguez is on the precipice of a major shift in her career, from television darling to movie star. As Andrea Fleytas, the only woman seen on the entire rig, Rodriguez is not the hero of the story — but she is the heart of it. Her performance gives Deepwater Horizon its emotional power, while also cementing Rodriguez's status as an up and coming Hollywood star.

A young dynamic positioning officer, Andrea spends the first half of the film as far away from the action as possible. She's up in the control booth while Mike (Mark Wahlberg) and Jimmy Harrell (Kurt Russell) are working with the oil pipes and having contentious meetings with BP executives, and yet when the pipe blows and the destruction of Deepwater Horizon begins, it's Andrea who audiences connect with. Rodriguez, with her uncanny, Jane the Virgin-tested ability to make viewers cry, is the one who delivers the emotional punch of the film. This effect is surprising, given the fact that it's Mike who audiences follow for the first 50 minutes of the film. We see him waking up with his adoring wife, helping his cute daughter with her homework, and shooting the breeze with his co-workers all around the rig. But for all the backstory given to him, it's Andrea who connects most to the audience, not Mike.

As a character, Andrea isn't fully fleshed out (small spoilers ahead). Viewers see her briefly leaving her home the morning of the disaster — her Mustang won't start, so she hitches a ride with her boyfriend, something she talks to Mike about later — but there isn't much shown about her life outside Deepwater Horizon that makes her more valuable to the audience. In contrast, Mike has about 20 minutes of screen time just about his home life. Deepwater Horizon wants audiences to care about Mike Williams, to identify with him. And yet, when he and Andrea are forced to fight for their lives, it's not Mike I felt most connected to, but Andrea.

Deepwater Horizon is about everyday heroes — "ordinary people doing extraordinary things," as Rodriguez said on Good Morning America . But part of what makes Andrea such a great character is that, in one scene's do or die moment, she freezes. Terrified and unsure, Andrea is so stricken that she can't even put on her own life vest. It's such a painfully relatable moment, performed perfectly by Rodriguez, and it really hits home the fact that these are ordinary people who were forced to survive a terrible tragedy.

More than Mike's desperation to get home to his wife and daughter and more than his — or any other character's — heroic actions, Andrea's panic is what makes Deepwater Horizon hit home emotionally. Mike is an ordinary man, yes, but his unflinching bravado makes it hard to connect with him. There's no real fear that he won't be able to work his way out of any situation, no matter how perilous. How many people in the world think that they could be a superhero when called upon by circumstance? How many people think they might just choke? Mike is the hero we all wish we could be, Andrea is the hero most of us are.

The fact that Rodriguez shines so brightly in the film's most emotional scene — despite her character's lack of backstory and the fact that she's barely lit by the fire burning around her — should tell you something about her talent. Simply put: Rodriguez is an incredible actor. She's every bit as much of a movie star as she is a television star, and her performance in Deepwater Horizon alongside Wahlberg proves that she can not only keep up with big Hollywood actors, but that she can eclipse them.