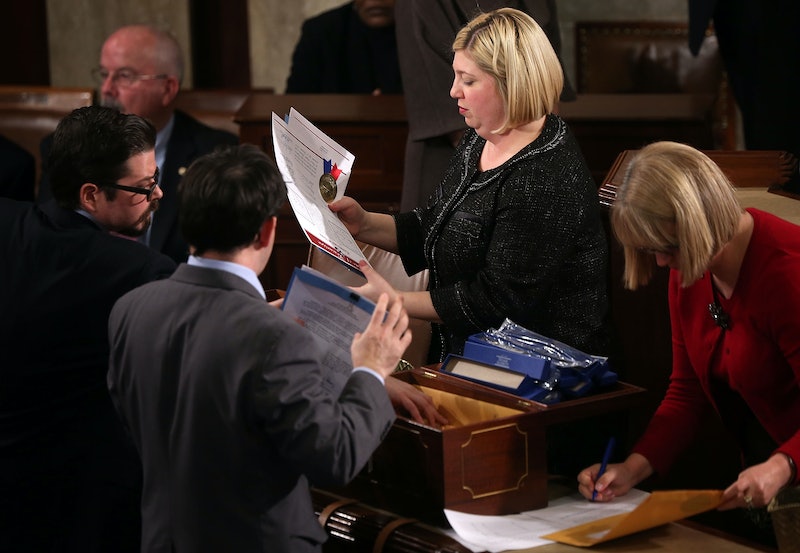 It would be an understatement to say that 2016 saw a presidential election unlike any other. In the past few weeks, there have been multiple events that have raised concerns about President-elect Donald Trump's ascendance to the White House, including a three-state recount effort that could potentially cost Trump the presidency. However these issues shake out, though, electoral votes will be counted by Congress in January 2017, in time for President-elect Trump to be inaugurated as the 45th president on Jan. 20.

The exact date of the tally is Jan. 6, 2017, and it is the day when Congress jointly convenes to count the Electoral College votes. Electors themselves vote several weeks earlier, on Dec. 19, 2016, when they meet and fill out ballots in their home states. That electors are actual human beings and not merely points awarded based on the popular vote is surprising to many Americans; their role in the process has been dramatically amplified this year, as some supporters of Hillary Clinton and third-party candidates have reportedly contacted electors personally to encourage them to vote against Trump, regardless of how their states voted. In some cases, it appears to be working. Politico reported that this election could see a "historic number of 'faithless electors,'" though it's very unlikely that enough electors will be persuaded to elect Clinton.

The lack of a cohesive anti-Trump movement in the Electoral College also damages any attempts to prevent his presidency from becoming official. A group of seven electors calling themselves the "Hamilton electors" have pledged to vote for "reasonable Republicans" instead of for Trump. The only problem? They are all from states that voted for Clinton. None of the "Hamilton electors" are even taking votes away from Trump.

Similarly, a Republican elector who opposes Trump, Art Sisneros, announced his decision to resign from the Electoral College rather than vote for Trump. This doesn't detract from Trump's vote total either, since Texans will simply select another elector willing to pledge their vote to Trump.

It seems all but certain that, barring some major revelation from the three states holding recounts, Trump will win enough electoral votes to become president. January 6 is when the election outcome that has baffled so many Americans for weeks will become official.