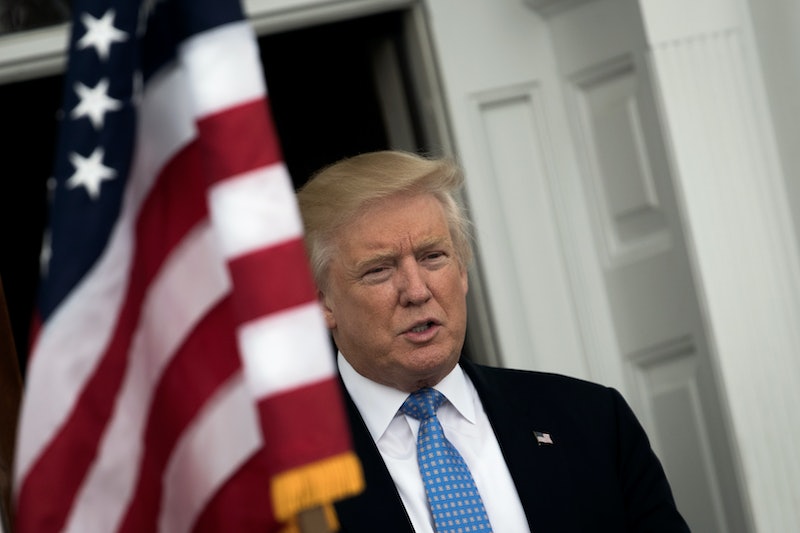 Among other things, President-elect Donald Trump is known for his outrageous Twitter habits. His undeniable affinity for the social media microblog leads him to tweet at all hours of the night and in a stream-of-consciousness fashion. He has targeted many an individual and organization with his 140-character zingers (just ask "crooked" Hillary Clinton or the "failing" New York Times), but it seems to be a two-way street. On Wednesday, the Office of Government Ethics (OGE) trolled Trump on Twitter, but it wasn't the first time he's had a taste of his own medicine.

Trump's tweets often follow a recognizable pattern. You know the pattern I'm talking about: He tends to make a brief statement, followed by an even more brief exclamation. For instance, on Tuesday, Trump tweeted, "I will be going to Indiana on Thursday to make a major announcement concerning Carrier A.C. staying in Indianapolis. Great deal for workers!" On Sunday, he tweeted, "Just met with General Petraeus--was very impressed!"

You've probably picked up on Trump's tweeting formula, and you're not alone. In fact, that's what makes many of the tweets that respond to him so entertaining: They follow the same formula and mimic his adjective-prone tone. No matter how they do it, Trump's Twitter trolls don't seem to be slowing down post-election.

On Wednesday, OGE, the organization responsible for preventing conflicts of interest in the White House, applauded Trump's decision to cut ties with his businesses during his term as president. By "applauded," I mean they seemed to sarcastically mock him in a series of nine tweets — all in unmistakable Trump fashion. One tweet read, "Brilliant! Divestiture is good for you, very good for America!"

During the presidential campaign, Trump challenger Hillary Clinton used Trump's tweets to fundraise for her campaign — a move than can be known as the ultimate Twitter troll from here on out. She also tweeted, "Delete your account," at Trump. That message became her most re-tweeted one ever, according to The Guardian.

Also during the presidential election, supermodel Chrissy Teigen vowed to "never stop talking about how horrible Donald Trump is." In case you were wondering, she hasn't stopped. Chrissy 2020.

President Obama likely knows better than to stir up a Twitter feud from the @POTUS handle. He has become the target of many of Trump's tweets, but he didn't get his revenge online. Rather, he read a tweet from Trump on Jimmy Kimmel's recurring segment, "Mean Tweets."

No doubt thanks to their wild and unpredictable nature, Trump's tweets became the tweets heard 'round the world. British author J.K. Rowling live-tweeted a presidential debate and compared Trump to a "giant orange Twitter egg."

Vice President Joe Biden's relationship with President Obama has made for some hilarious memes. But so too has Biden's assumed attitude toward Trump. After Trump's election, many Biden memes imagined ways that the current veep could prank the president-elect.

After Trump popularized the phrase "many people are saying," Twitter users responded in full force. Surprisingly, their messages seemed no wilder or more outrageous than Trump's.

It's safe to say that Trump uses Twitter like no president before him. Of course, it's too early to tell if he'll tweet with the same mannerisms when he inherits the @POTUS brand. For now at least, the trolls may continue to come from inside and outside the federal government.