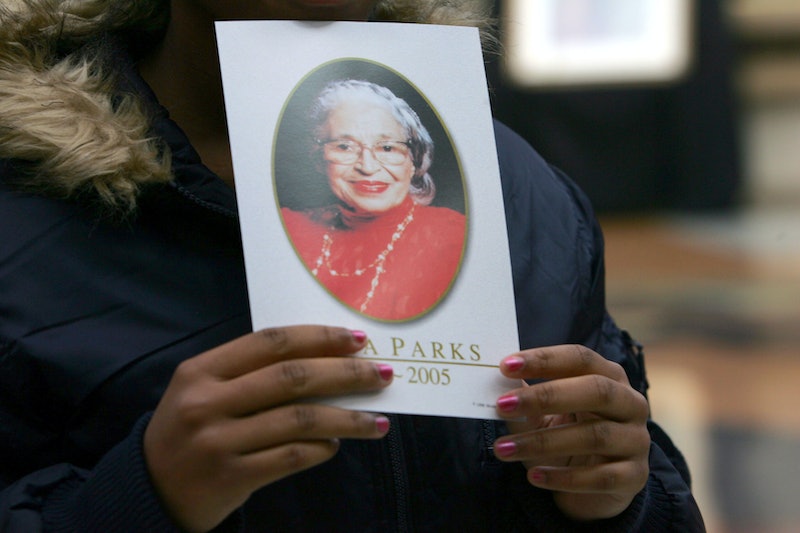 Every child in America grows up learning the courageous and important story of Rosa Parks, the black woman who in 1955 refused to give up her seat on a Montgomery, Alabama, bus to a white passenger. Thursday marked the 61st anniversary of her civil disobedience, which helped set the civil rights movement in motion. With so much racial tension in our country, now is a great time to look back and honor the woman who contributed to civil rights advancement. The Smithsonian has a great resource that offers another insight into the historic event through its annotated document of Rosa Parks' arrest record.

Smithsonian Magazine enlisted Willam Pretzer, a senior curator at the Smithsonian's National Museum of African American History and Culture, to help comb through Parks' arrest documents and annotate them with additional background information. Parks' actions that day are widely considered to have begun the boycott that ended segregation on buses and encouraged civil rights activists like Martin Luther King Jr. to step up and become leaders.

The documents feature some really interesting things, including Parks' fingerprints from her arrest. It's fascinating to go through the entire collection and see what Parks lived through that day, and battled every day before and after to make a change in this country. It's worth checking out the entire document, but here are some cool highlights to take note of.

Parks Had Problems With The Driver Before

Parks, 42 years old at the time of the arrest and working as a seamstress, hurried to board a bus home in the rain. Little did she know, the bus was driven by a man named James Blake, who according to the documents and her biography, she had avoided riding with for a few years because of his reported reputation of treating black passengers badly and a negative experience she had with him previously.

Bus Drivers Had A Lot Of Power

The way city buses were set up at this time in history, the first 10 seats were reserved for white riders and the back 10 seats were for black riders. The seats in the middle were up for grabs, depending on space. But if a white person wanted to sit down in a row of the middle space where multiple black people were already sitting, they all had to get up.

On the night of Parks' arrest, the white seats were all full when a white man entered the bus and wanted to sit. Parks was seated in the first row in the middle, non-assigned area of the bus. When the white man wanted to sit, the other black passengers around her moved to the back, and Parks slid over to the window seat instead. She refused to move from there. That's when Blake got the police involved, and Parks was ultimately arrested. According to Smithsonian, drivers in Montgomery were permitted to carry guns and had police authority to oversee and enforce seating arrangements in the 16-seat middle area:

Any employee in charge of a bus operated in the city shall have the powers of a police officer of the city while in actual charge of any bus, for the purpose of carrying out the provisions of the preceding section, and it shall be unlawful for any passenger to refuse or fail to take a seat among those assigned to the race to which he belongs, at the request of any such employee in charge, if there is such a seat vacant.

Parks Had To Pay A Fine

After her arrest, according to the documents, Parks appeared in court at Montgomery's City Hall on Dec. 5, 1955. The trial lasted only five minutes, where she was found guilty and required to pay a $10 fine and $4 in court fees.

Her Civil Disobedience Was Intentional

Some historians have painted Parks as a tired, old black woman who was just too tired to get up and move to the back of the bus that day. Or, at the very least, they leave out the scope of her civil rights activism, which was a big part of Parks' life. The Smithsonian documents reinforce Parks' participation in activism and how she spent her weekends as a secretary for the NAACP.

Prezler said, "She was highly sensitive to issues of segregation and Jim Crow, and she was trying to break down that system wherever she could: promoting voting rights, defending black women against rape, trying to prosecute white offenders and to create legislation that would protect African Americans." Later, Parks wrote in her biography, "The only tired I was, was tired of giving in."

On June 4, 1956 in Browder v. Gayle, the U.S. District Court ruled that segregation on buses was unconstitutional. The police report of Parks' arrest, as well as a diagram of the bus, was used as evidence in the case that centered on four other black women who had also experienced discrimination on city buses.

Her Husband Was Also An Activist

Parks met her husband, Raymond Parks, in 1931 when she was 18. In her biography, she wrote that he was "the first real activist I ever met."

Overall, the documents are an illuminating look at such a monumental time in our country's history. It's incredible how a history everyone thinks they knows has so many more layers than are represented in education. Learning more about Parks and her place in history is an important part of respecting our past and moving forward.