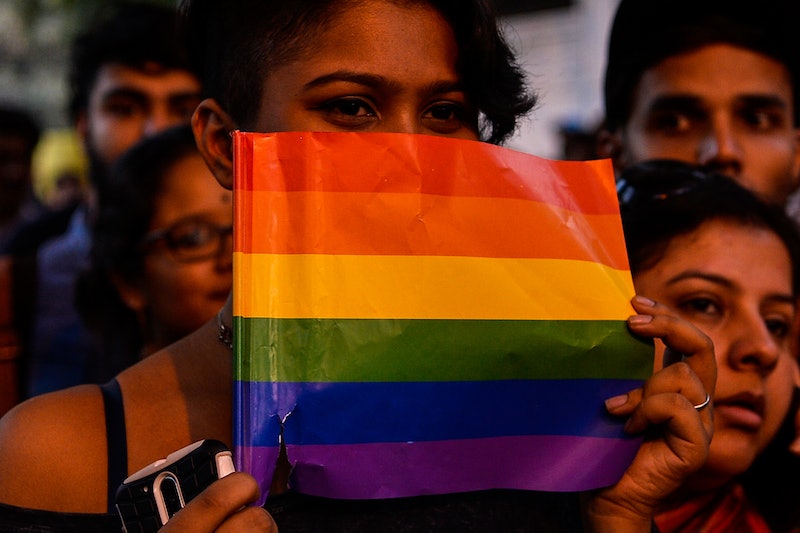 Despite claims from supporters that Donald Trump would be the most pro-LGBT Republican president to date (which, let's be real, is not a high bar to clear), the way his cabinet is shaping up should have LGBT Americans on edge. At press time, literally every single person the president-elect has nominated for administration positions has a documented history of opposing LGBT equality, as New York Magazine explained. Most of Trump's transition team and top advisers have deep roots in right-wing movements opposing marriage equality, equal access for transgender people, and/or basic nondiscrimination protections for LGBT citizens. And with the Republican Party in control of both chambers of Congress, there's no reason to suspect that Trump's appointees won't be confirmed and allowed to implement their often draconian ideas about fundamental American "ideals."

So what can LGBT Americans — and the people who love us — do to stem the tide of hateful legislation that's all but certain to come down from Washington once the Trump administration takes hold? Well, the first thing we can do is to get informed. Find out who's on Trump's team, what dangers they pose, and how you can protest their appointment. To get started in that effort, out author and journalist Matt Baume created a handy video guide to the 10 most anti-LGBT people currently slated for Trump's cabinet.

While there's no shortage of ominous candidates headed for Trump's White House, when it comes to defending LGBT folks, these are three of the most terrifying prospects.

When Trump named Betsy DeVos his nominee for Secretary of Education, advocates for public schools immediately cried foul. DeVos is an outspoken supporter for the "school choice" movement, which advocates the use of charter schools and "vouchers" in place of funding for public schools. But for LGBT students in particular, DeVos' stated support for religious schools over secular, public institutions could spell major trouble.

As Politico reported earlier this month, DeVos' family of billionaire Republican donors has a long history of supporting anti-LGBT causes, including donating thousands to groups advocating so-called ex-gay therapy (sometimes called "conversion" or "reparative therapy"), which tries to change a person's sexual orientation or gender identity. The unscientific practice has been rejected as ineffective and harmful by every major medical and mental health association in the country, and it's illegal to use on minors in five states and Washington, D.C.

Given that LGBT students consistently report being harassed at school more frequently than their straight and/or cisgender peers, youth advocates are rightly worried about the future of existing anti-bullying programs and efforts to make schools safer for LGBT students with DeVos leading the U.S. Department of Education.

In addition to having a score of zero (out of a possible 100) on the Human Rights Campaign's congressional equality scorecard, Alabama Sen. Jeff Sessions is roundly recognized as one of the most anti-LGBT members of Congress. He voted to amend the U.S. Constitution to ban marriage equality, voted against creating employment protections for LGBT workers, and opposed the Matthew Shepard Hate Crimes Act and renewing the Violence Against Women Act when it was amended to include transgender women.

Most crucially for his potential position as Trump's top lawman, Sessions is a co-sponsor of the First Amendment Defense Act, which, if passed, would allow business, individuals, and medical providers to refuse to serve LGBT people, so long as they cite a "sincerely held religious belief." The sweeping legislation builds off the Religious Freedom Restoration Act signed by Vice President-elect Mike Pence in Indiana, and has the potential to enshrine religion-based anti-LGBT discrimination into federal law.

To add insult to injury, Sessions, who was deemed too racist to be a federal judge in the 1980s when nominated by Republican president Ronald Reagan, would be replacing Loretta Lynch (pictured above) as Attorney General. Lynch is the first African-American woman to serve in that position, and in her short tenure, emerged as an unparalleled defender of the rights of trans Americans. Sessions voted against Lynch's confirmation in the Senate in 2015.

Before becoming Trump's right-hand man, Indiana Gov. Mike Pence was best known on the national stage for standing by his controversial Religious Freedom Restoration Law. Among LGBT circles, the governor who described himself as "a Christian, a conservative, and a Republican, in that order" was also notorious for cutting funding for HIV prevention programs in Indianapolis, which led to an HIV outbreak so severe that federal officials had to intervene.

And then there was the time in 2002 when congressional candidate Pence's website advocated redirecting HIV and AIDS funding to "institutions which provide assistance to those seeking to change their sexual behavior." A Pence spokesman told The New York Times this month that that statement has been "misinterpreted," but Pence has never denounced the debunked, dangerous "therapy."

And since Pence's new boss, president-elect Trump, has no experience in elected office, it's safe to assume that Pence will play a pivotal role in making legislative and cabinet decisions. He's already leading Trump's transition team, and his fingerprints are all over the controversial appointments, as ShareBlue.com editor Melissa McEwan explained:

Although Trump hasn't taken office yet, it's clear that LGBT Americans can't afford to "wait and see" just how hateful his administration will be. Trump's potential appointments have already made it crystal clear that LGBT rights will be under attack, starting on Day 1.