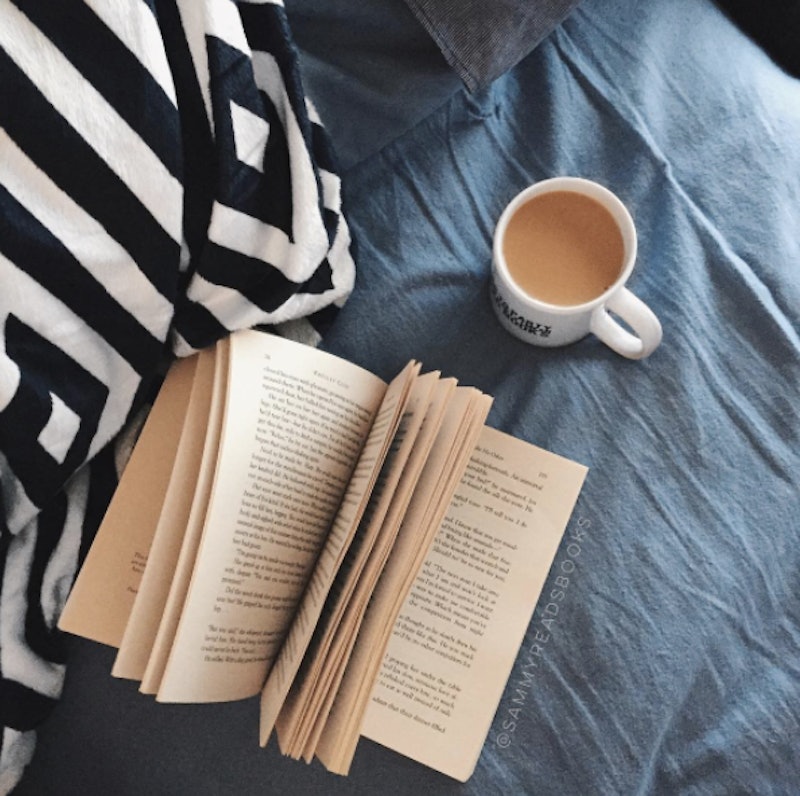 In my wallet I have three library cards: a white one I signed in chunky script when I was five years old, a yellow card from the first time I moved away from home, and my current Brooklyn blue card. They are some of my most prized possessions, and I’m not joking when I say this: owning a library card saved my life.

Growing up in suburban Pennsylvania, I was the kid my middle school teachers described as "unique." I always felt awkward in my ever-changing body: the music I liked was different, the clothes I wore were different, and my hair was perpetually greasy. I was a full-out weirdo — and not in the cool alternative The Perks of Being A Wallflower kind of way but rather in the even my friends who are also weird constantly remind me that I’m the weirdest one kind of way. To top it off, I was also labeled "different" because of my religion.

"I always felt awkward in my ever-changing body: the music I liked was different, the clothes I wore were different, and my hair was perpetually greasy. I was a full-out weirdo — and not in the cool alternative The Perks of Being A Wallflower kind of way..."

I was one of the few Jewish students at my middle school. This meant that I didn’t go to CCD (an after-school religious program) and I didn’t go to the local Catholic School dances. In my town, where you went to church was just as strong as an identifier as what your parents did for a living. Being Jewish made me both a specimen to be curious of and someone to be whispered about in the hallways, but praying to a different version of G-D definitely seemed to matter to others more than it did to my teenage myself. For me, it was just another identifier that made people not like me for reasons I didn’t understand.

During the last year of middle school, classes went from slightly upsetting to practically unbearable. One boy, Craig*, decided the best use of his time was to constantly torment me. According to Craig, I was gross, ugly, fat, and — the worst crime of all — a Jew. He would throw change in front of me as I walked from class to class to see if I would pick it up. He would call me a kike in the lunchroom. He tossed my books in the boys bathroom and told me no one would ever date me because I was ugly and had a huge nose.

The only thing that helped me get through the ninth grade was owning a public library card. I would go to my library a few times a week after school and sit in a place where no one bothered me and I could pretend to be anyone I wanted. I checked out stacks and stacks of books about being a teenager: stories about first dates, sports teams, family troubles, teen pregnancy, boarding schools, historical fiction, dystopian novels — anything I could find.

"I would go to my library a few times a week after school and sit in a place where no one bothered me and I could pretend to be anyone I wanted."

I read to get perspective on my own situation. By reading books about other teens who felt out of place in their schools and communities I was able to connect with characters who also constantly felt like shit. Fat Kid Rules The World by K.L Going, King Dork by Frank Portman, Stargirl by Jerry Spinelli, and literally anything by Laurie Halse Anderson or Sarah Dessen taught me that it was ok to be different and that I wasn’t alone as I thought I was.

I read book after book about Jewish teenagers and Jews in general until the librarian told me: “I’m sorry but you’ve already read every one on that subject matter. We can do interlibrary loan if you’d like?" Reading helped me connect to my religion and my community in a way that ten years of Hebrew School never did.

"I learned that at the core of all these stories were teenagers who, like me, didn’t feel like they were where they were supposed to be."

During my teenage years I also read books about teens who thought about committing self-harm or who felt like they couldn’t find a way out of whatever situation they were experiencing. During my teenager years, I had a loving family and a safe home — more than many have and something I thank my parents and brother for every day. However, I also had to spend eight hours a day in a place where a boy made it his mission to make me feel worthless and no one seemed to care that I cried or stress vomited in the bathroom. I was alone and sad and scared and angry and hated myself more than I’ve ever hated anyone.

Without my public library, and without the opportunity to read endlessly, there’s a good chance I would have manifested that hate towards myself into something ugly and self-harming. Instead, I grew up and moved to New York City where I found a group of people who love me for me and whom I love right back.

"I grew up and moved to New York City where I found a group of people who love me for me and whom I love right back."

A few months ago I was waiting for the subway when Craig walked off the train and came right up to me. He recently graduates from an elite college, and he's an investment banker now, living in Midtown

We did the awkward, "Hi! How are you?" dance as I tried to remain calm. After the pleasantries were over, he looked at me and began to apologize.

“I’m sorry I treated you like that in middle school. I was going through some stuff and I shouldn’t have taken it out on you,” he said, wearing that charming-but-snaky boy smile.

“Yeah you were a real asshole,” I told him. What else was there to say?

He promised that he was better and that he changed since he left our hometown. I want to believe him. Maybe he left the suburban bubble and really saw the world. Maybe he now has empathy and respect and works towards helping others.

Either way, it doesn’t really matter. I got on the next train home, pulled a book out of my bag, and read.

More like this
The 20 Best Audiobooks To Fall Asleep To
By Aoife Hanna and K.W. Colyard
30 Books To Read This AAPI Heritage Month
By K.W. Colyard
This Is How Taylor Swift Feels About Joe Alwyn’s Steamy New Series
By Alyssa Lapid
Simply Sayo Doesn’t Consider Kpoetry Hard Work
By Jessica Morgan
Get Even More From Bustle — Sign Up For The Newsletter