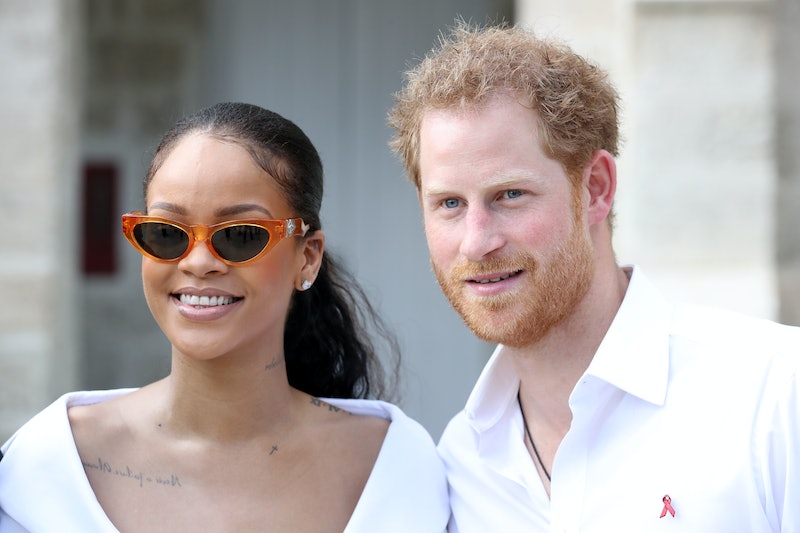 During a trip to Barbados on Wednesday night, something incredible happened. Prince Harry met Rihanna. Or rather Rihanna met Prince Harry. Or rather the greatest romantic comedy of our generation — tentatively titled When Harry Met RiRi — began to unfold. Naturally fans of Prince Harry, fans of Rihanna, and fans of the world's greatest (but keep in mind, not at all real) new "it" couple had things to say. Harry and Rihanna met at an event celebrating Barbados' independence. They also got along famously as they sat side-by-side to raise HIV awareness on World AIDS Day. (They both got tested, a bonding experience I'm sure.) Even better, there are photos to prove all of this happened.

Sure, Prince Harry's currently in a relationship with Meghan Markle, and, while the world can easily wish them all the best (she seems great, they seem happy), there's a glint in the Prince's eye in those aforesaid photos. This cannot be denied. (Though to be fair, I think anyone would have a glint in their eye when around Rihanna.) Dream scenarios aside, Rihanna and Prince Harry could shape up to be good friends. They have a lot of shared common interests, i.e. are incredible, don't need last names, have double consonants in their monikers, etc. I could go on, but for now, check out this glint:

Just going to leave that here. Not saying anything else. Twitterverse, take it away...

RiRi As The Next Queen?

RiRi as our Queen would fix most of the world's problems.

Some of That RiRi

Who wouldn't want some of that? Just ask Drake.

If it wasn't for Rihanna, he would definitely be yours.

This Is A Good Point

Fair observation, fan. But it's Prince Harry. What did you expect?

I don't have an answer to that question.

She puts that on that crown mighty effortlessly.

Prince Harry and Rihanna are somewhere between platonic acquaintances and nascent best friends. There are no indications to think otherwise. However, I'm just saying, there's something about "Princess Rihanna" that feels... I don't know... right? Like it was always meant to be this way. Princess. Rihanna. All hail Princess Rihanna.