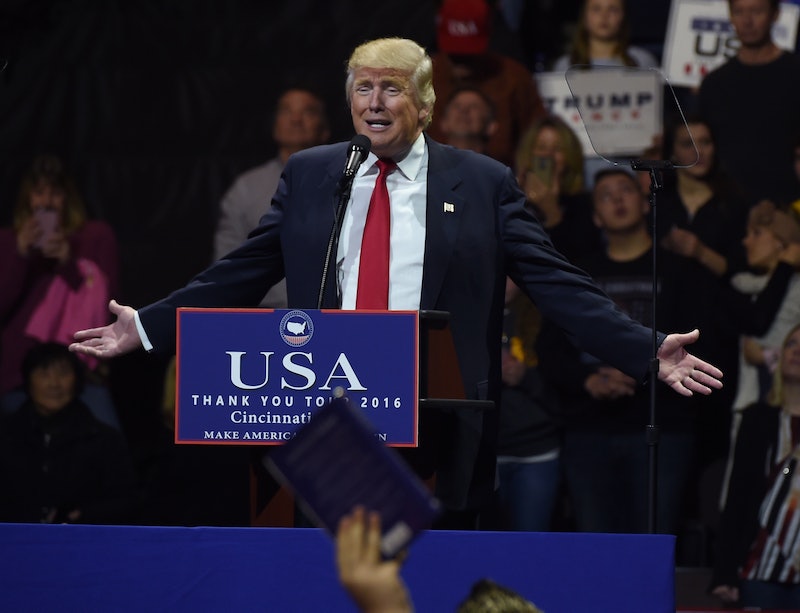 President-elect Donald Trump was known for his aggressive tone at campaign rallies, and as of late, it appears as though he's not switching up his ways. On Dec. 1, he began his "Thank You" victory tour with a stop in Ohio, putting on his normal show. This, however, is problematic, considering that Trump's rallies have tended to be contentious and include acts of violence between members of the audience. But don't worry; at least the president-elect hasn't stopped using the term "big league." Mid-rally, Trump triumphantly proclaimed: "America will start winning again, big league." (Or "bigly." The jury's still out on this one.)

To be fair, Trump did initially preach a message of unity. "We're a very divided nation, but we're not going to be divided for long; I've always brought people together," he said. Later, while as usual positioning himself as a political outsider, the president-elect added: "For too long Washington has tried to put us in boxes. They separate us by race, by age, by income, by geography, by place of birth. We spend too much time focusing on what divides us."

While the Trump campaign put out a statement about how they "condemn bigotry and prejudice in all of its forms," and "denounce all of the hatred and forcefully reject the language of exclusion," Trump strangely enough happened to focus on "boxes" like "place of birth" and "religion" when he reiterated that he intends to keep his campaign promises. Specifically, he still intends to build a wall along the United States-Mexico border and restrict Muslim immigration. Restricting people from entering the country based on their religious beliefs seems hypocritical to say the least, since Trump would be promoting the same kind of dividing factor he criticized.

Still, Trump did change his tune a little bit by deciding not to prosecute Hillary Clinton, as he many times said he would during his campaign. "We did have a lot of fun fighting Hillary, didn't we?" Trump asked the crowd, who responded by chanting, "Lock her up!" But he kept up his practice of insulting his perceived opponents, throwing shade at everyone from "the extremely dishonest press" to Ohio Gov. John Kasich, who initially opposed Trump's running for president.

And lest his supporters forget that Trump has been working on selecting a cabinet for the last three weeks, the president-elect even decided to throw in a sneak preview of his next cabinet choice. Trump announced his pick of General James Mattis for defense secretary. "We’re going to appoint ‘Mad Dog’ Mattis as our secretary of defense, but we’re not announcing it until Monday," he told the crowd, asking them not to tell anyone. Don't worry, Donald, your secret's safe with me. And everyone else who has access to the internet.