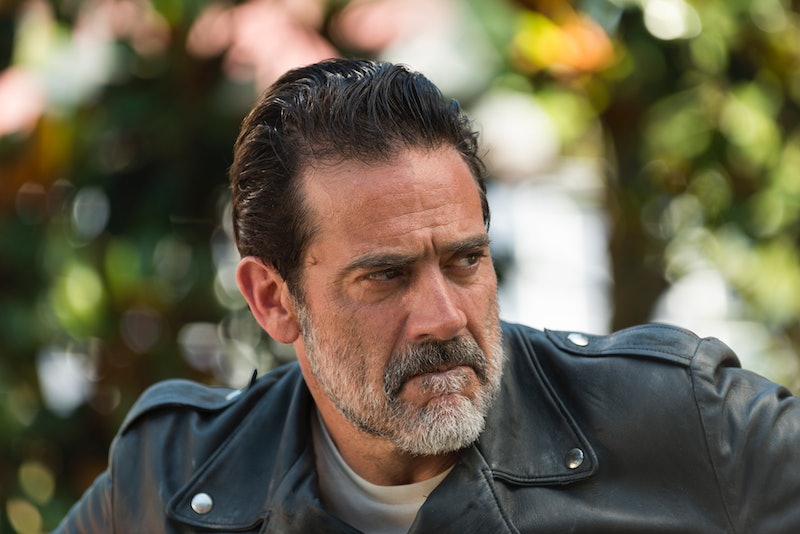 By now, The Walking Dead fans know the show's formula: our plucky band of survivors find a promising new shelter, they build a life there, they're threatened by a new group of villains (usually with a charmingly psychopathic leader), the shelter is destroyed, they hit the road and find a promising new shelter. There's nothing wrong with having a formula — in fact, there's comfort in familiarity — but it does lend itself to a certain amount of predictability. Right now, viewers are likely wondering how long it will be before the Saviors are defeated, Negan is killed, and the group hits the road once more. However, because of what happens to Negan in the Walking Dead comics, the answer may be surprising

If the show seems to be gearing up to an all-out war between the Saviors and the united forces of Alexandria, the Hilltop, and the Kingdom… then you'd be right. That's exactly where things lead in the comic series by Robert Kirkman. And if you thought that the impending conflict would result in the gratifying death of Negan, just like the deaths of other leaders both good and bad (The Governor, Deanne Monroe, etc.)… well, in that case you'd be wrong. Not only does Negan survive the upcoming battle, but he's still alive in the comic series, several years later story-wise. Like a cockroach, Negan always seems to be able to wriggle out of a tight spot.

When the final confrontation between Negan and Rick finally comes, our hero decides that the villain doesn't deserve the mercy of a quick death; Rick wants to prove Negan's entire twisted worldview wrong. So, in the middle of a parlay, Rick slits Negan's throat and after the murderer passes out from blood loss, he awakens to find himself locked up in a prison cell inside Alexandria where Rick tells him he'll have a front row seat to see how all of the colonies are more successful and prosperous without Negan's tyrannical leadership, until he dies an old man.

The next volume in Kirkman's saga then flashes forward two whole years since the end of the war with the Saviors; Negan is still imprisoned, but has struck up a disturbing relationship with young Carl, as a sort of demented father-figure counterpoint to Rick. Despite the fact that the young Grimes continually insists that he wants to kill Negan, he keeps visiting the murderer in prison, where they have lengthy conversations about Carl's life and struggles.

When a new group of villains begins terrorizing the citizens of Alexandria, Rick actually turns to his old foe for advice on defeating the so-called Whisperers. (They're a group of survivors who continually cloak themselves in the skins of fallen zombies so they can walk among them undisturbed.) It's at this moment that Negan turns from full-blown antagonist to something of an anti-hero, as he helps bring down a group that is arguably even worse than his own Saviors; he even infiltrates the Whisperers' camp, decapitates their leader, and brings her zombified head back to Rick as a trophy.

It's around this time that the current issues of the Walking Dead comics have left off: with Negan free once more, fighting against the Whisperers, seemingly on Rick's side once and for all. But how much is he really fighting for the forces of good, and how much is he actually fighting for his own manipulative ends? That remains to be seen… but it's clear that the character isn't going anywhere for a while, which explains why actor Jeffrey Dean Morgan recently revealed in an interview with Howard Stern that he'll be portraying Negan at least through The Walking Dead Season 8.

Whether you love to hate him or just plain hate him, you'd better get used to Negan's presence on the show — because, barring a major departure from the source material, the leather-clad villain is here to stay.