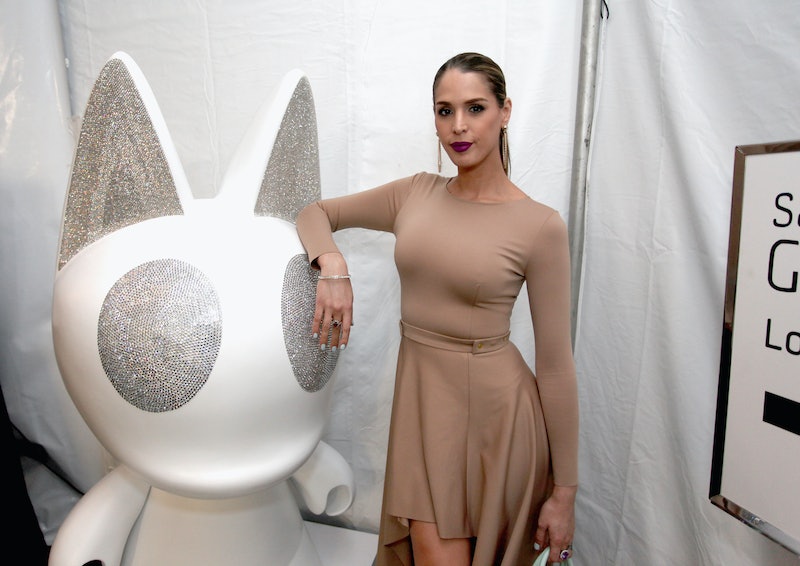 RuPaul's Drag Race has recently come under fire for its use of non-transgender friendly language. Now two of its most popular — and openly transgender — stars, Carmen Carrera and Monica Beverly Hillz, are speaking out. But unlike how so many other media frenzies often play out, these two women are taking the high road AND proving that sometimes missteps are better framed as learning moments and an opportunity for discussion rather than continued ire.

It all began during a mini-challenge on the show titled "Female or She-Male," wherein contestants were asked to identify whether someone was a cisgender (a non-transgender woman, in this case called a "Female") woman, or a former Drag Race contestant ("She-Male") based on a portion of a photo. Several activists then came out against the show's segment, as "she-male" is considered to be an anti-transgender slur within the community (the stigma is real, y'all). This resulted in RuPaul and the show's producers to release a statement on the matter:

We delight in celebrating every color in the LGBT rainbow. When it comes to the movement of our trans sisters and trans brothers, we are newly sensitized and more committed than ever to help spread love, acceptance and understanding.

Speaking out, Carrera — one of the series most popular contestants, and the first openly transgender woman on the show — took to Facebook to respond to the affair, stating the following:

Although I am certain RuPaul's Drag Race didn't mean to be offensive, let this be a learning experience. I think the show has opened up and educated the minds of many people who were ignorant to the world of drag and has made equality and respect a possibility for those involved, not only as equal beings but as phenomenal artists. There has always been a huge presence of trans artists in the drag scene. "Shemale" is an incredibly offensive term, and this whole business about if you can tell whether a woman is biological or not is getting kind of old. We live in a new world where understanding and acceptance are on the rise. Drag Race should be a little smarter about the terms they use and comprehend the fight for respect trans people are facing every minute of today. They should use their platform to educate their viewers truthfully on all facets of drag performance art.

Following suit was Monica Beverly Hillz, another contestant who came out as transgender on the show (during season five), who echoed Carrera's learning experience motif while also pushing for further changes in the show's outlook on transgender contestants.

After my experience of being on the show, I would say that, to me, the use of the words "she-male," "ladyboy" and "tranny" are not cute at all. I have fought, and still am fighting, for respect from society -- to be accepted as a woman and not referred to as a "tranny" or "she-male." People don't understand the daily struggle it is to be a transgender woman. Some days are great and some days I can't be around anyone because I have so much anxiety, so much on my mind and just feel alone in this world. After being on TV and coming out, it is very difficult to live a normal life. So when you see a show that you look up to and have been a part of, it kind of sucks hearing them use those words. I will say that RuPaul and the entire cast and production team were amazing. To this day they still check up on me, so for that I am forever grateful. However, maybe some things need to be changed about the show, because it's not just a drag show anymore. We have beautiful transgender cast mates paving the way for all transgender showgirls.

If only all disputes and controversies could be handled with as much grace, intelligence, and discussion-building as this. Instead of flaming the fires of rage, Carrera and Hillz both took the high road — condemning the language but coming from an empathetic place of understanding, asking people to learn from the err of their ways and move forward and educate themselves. The struggle for transgender folks is very real, but this is how you evolve, folks.

More like this
24 History-Making Black Women You Probably Didn't Learn About In School
By Ayana Lage and JR Thorpe
25 Inspiring Quotes From Black Women To Celebrate Black History Month
By Kyli Rodriguez-Cayro and JR Thorpe
"Lavender Haze" Star Laith Ashley Breaks Down Filming With Taylor Swift
By Jake Viswanath
Ozzie’s Coming Out Scene With Kitty On 'That ’90s Show' Has Twitter Sobbing
By Brad Witter
Get Even More From Bustle — Sign Up For The Newsletter
From hair trends to relationship advice, our daily newsletter has everything you need to sound like a person who’s on TikTok, even if you aren’t.