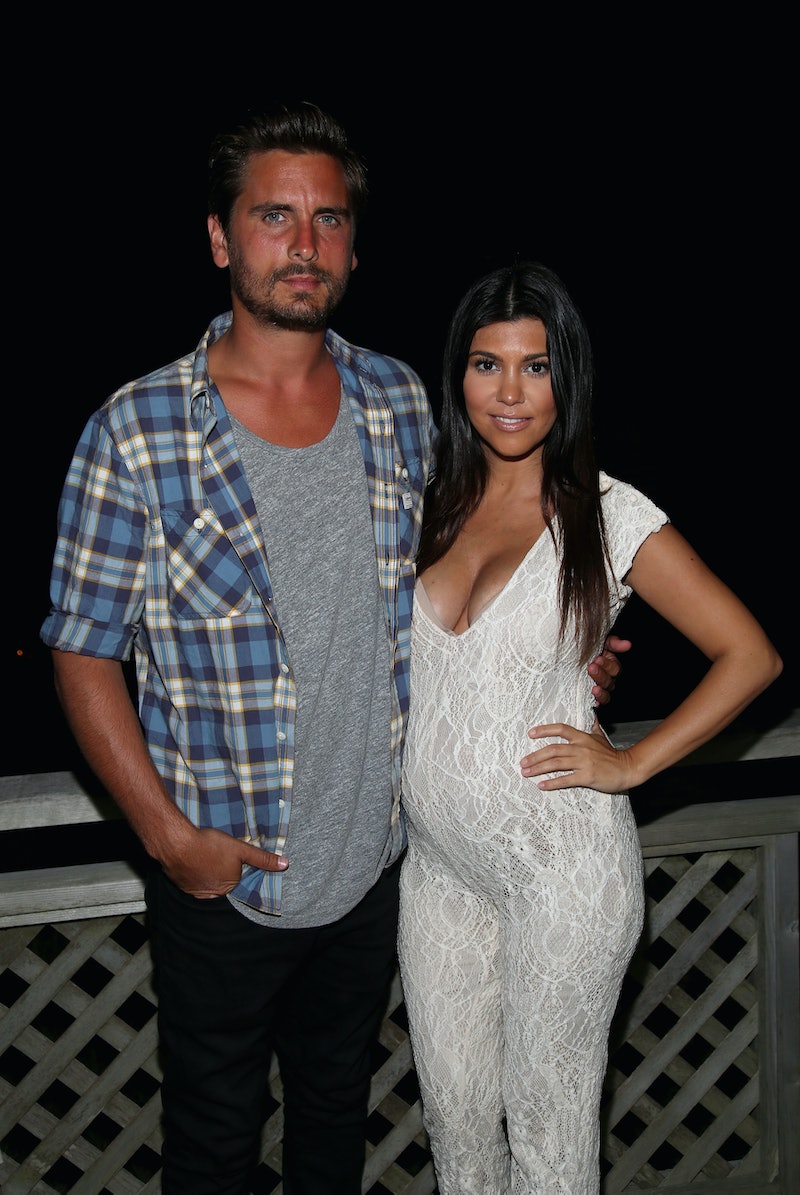 If you haven't heard the news, on Friday E! News reported that Kourtney Kardashian and Scott Disick are once again a couple. A source dished they have reportedly been back together for a few months now and said, "They are back together and giving their relationship a try again." Bustle has reached out to their reps for comment, but has yet to receive a response. They first broke up in July 2015 after nine years and three children together, so why did Kourtney Kardashian and Scott Disick get back together?

Like it usually goes with the Kardashian/Jenner clan, it seemingly comes back to family. According to a source who spoke with E!, Kardashian and Disick "both want to make it work for them and their kids," Mason, Penelope, and Reign. If there is any truth to the matter, it makes sense. Why wouldn't you want to make things work for the sake of your kids? If you can get through the tough times and find your way back to each other, that's great.

Speaking of working through hardships, a different insider also told E! that Disick has scaled back on the partying, which brought Kardashian back to him. "Scott's mellowed out a lot and hasn't been partying," the source said. His heavy partying and drinking was always a huge issue for Kardashian. In an October 2015 episode of Keeping Up With the Kardashians, the Season 10 finale, she officially broke up with Disick. "Scott will be amazing for three months then go out of town and go off the deep end," she said in her private interview. "I don’t know if that’s a pattern I can continue with."

"He’s not being a good partner to me. I could never rely on him, depend on him for one single thing and I don’t want to show my kids that that’s OK," she added. "I love Scott, but I’ve been dealing with this for so long, it’s definitely not good for me. At this point I’m really just trying to focus on me and the kids and make them the priority."

Well, it seems like after making herself and their three kids the priority for over a year and a half, they are back on good terms. Kardashian has never been shy about admitting Disick will always be part of the family, despite the troubles they've faced. "Well, we're not together," she said on The Ellen DeGeneres Show in January. "I feel like every day is different, but we're totally getting along. Like, we have three beautiful kids together... But, you know, he's family. He'll always be."

Even in April she opened up to the Today show about their future. She said, "We're not getting back together right now, but I don't know what the future holds in life, in God's plan. But we're just doing our best to be the best parents. Like, he came with us to Vail and it was great. But, like, we're friends at this point."

Now, it appears he is back in the family fold officially — and romantically. Here's hoping they are in a healthier and more positive place with their relationship. Kourtney and Scott forever, right?