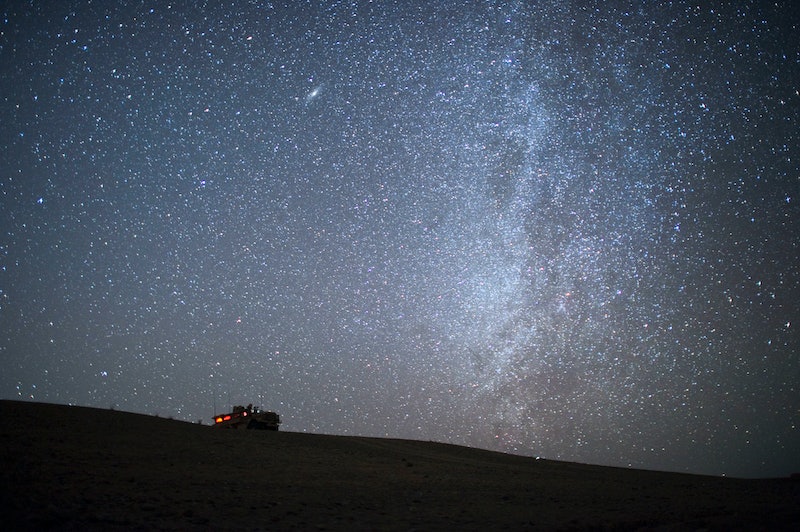 If you've been paying attention to any of the doomsday rumors swirling around the internet lately, you may be wondering if Nibiru is real. If it were any other year, the idea would be given as much credence as any other doomsday theory (so, like, none outside of 3 a.m. anxiety attacks). Then again, 2016 has been so odd it feels like the alternate timeline on a TV show. Maybe you're a little nervous. That's understandable. And it means that now is as good a time as any to try to get to the bottom of this whole thing, so let's take a look, shall we?

For those who aren't up to date on their doomsday prophecies, Nibiru, also known as Planet X or Planet Nine, is believed to be a rogue planet whose wide orbit wreaks havoc on Earth roughly every hundred thousand years. Predictions of impending Nibiru-related doom have surfaced every few years since the '90s, and they're making the rounds again as 2016 draws to a close. (Again, understandable, as 2016 has been, for all intents and purposes, a dumpster fire.)

It's a scary thought, so first, let's get that anxiety out of the way: No, there's no gigantic planet zooming through the outer edges of the solar system on a collision course with Earth, nor will any planet orbit close enough to cause mass extinction any time soon. Back in 2012, another year favored by doomsday prophets, NASA released a statement explaining why the apocalypse didn't come to pass which also touched on the possibility of Nibiru: "Nibiru and other stories about wayward planets are an internet hoax. ... If Nibiru or Planet X were real and headed for an encounter with the Earth in 2012, astronomers would have been tracking it for at least the past decade, and it would be visible by now to the naked eye," the article explains. Basically, a planet as big as Nibiru is supposed to be (four to eight times the size of Earth, supposedly) would be hard to miss if it was only a month away from colliding with Earth.

If that's not enough to put your mind at ease, the existence of Nibiru has been debunked by several other sources aside from NASA. That being said, one aspect of the Nibiru prophecy appears to have some truth to it: The possibility of a giant ninth planet somewhere in the outskirts of the solar system.

It's still hypothetical, but scientists have found substantial evidence of a Neptune-sized planete lurking in the outer edges, unimaginatively known as Planet Nine. In 2014, Scott Sheppard and Chadwick Trujilo found that the behavior of objects past Neptune indicate the presence of something with enough mass to shape their orbits around the sun. Earlier this year, the possibility of this ninth planet was further bolstered by a study published by Konstantin Batygin and Mike Brown. According to their calculations, six distant objects have elliptical, tilted orbits, suggesting that a larger, unseen object is influencing them. Batygin and Brown believe that if it exists, Planet Nine is around 10 times as massive as Earth, with a tilted orbit that takes 15,000 years to complete. Its own elliptical orbit may have been caused by getting too close to one of the gas giant planets and being thrown into the outer solar system.

Since Batygin and Brown published their findings in January, the case for Planet Nine's existence has only become stronger. Scientists have discovered new "extreme" objects orbiting in a cluster, which could indicate — you guessed it! — disruption by something with a large gravitational pull. One astronomer on the hunt for Planet Nine told Space.com that researchers will know for sure whether it exists within a few years.

So a giant ninth planet may exist in the outer solar system, but scientists have been sure to point out that Planet Nine poses no danger to Earth. In other words, it's not Nibiru.

There you have it! A ninth planet might be real, but unless some scientist with a sense of humor renames Planet Nine after the doomsday prediction, Nibiru definitely isn't. Looks like it's time to direct your worrying elsewhere.

More like this
How To See The Lunar Eclipse On May 15-16, 2022
By Kaitlyn Wylde
What To Know About Taking More Than 1 Piriteze Per Day
By Bustle UK
The 6 Best Balaclavas To Keep Your Face, Head & Neck Comfortably Warm
By Jenny White
Here’s What Sarah Jessica Parker’s Canned Cosmo *Actually* Tastes Like
By Emma Garza
Get Even More From Bustle — Sign Up For The Newsletter