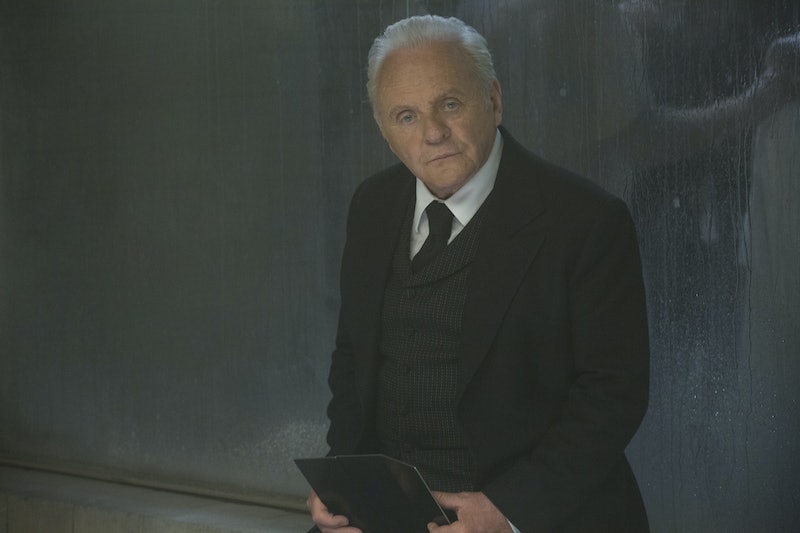 By now, viewers know very well that the mysteries of Westworld are an integral part of the fabric of the show. Fans tune in every week not just for the terrific acting and gorgeous production values, but also in an attempt to unravel the complex puzzles of the show's labyrinthine plot. With the show heading into its Season 1 finale, "The Bicameral Mind," this Sunday night, you might expect it to stop bringing up new mysteries in favor of beginning to resolve lingering ones. But leave it to a show written by one of the Nolan brothers (Jonathan, an Oscar nominee for his Memento screenplay) to be constantly challenging his viewers with new questions like, "Who's the third man in Ford's photo?"

This new mystery arose simultaneously with the solving of another. In last Sunday's penultimate episode, "The Well-Tempered Clavier," we finally got confirmation of the popular fan theory that Bernard is actually Arnold; or, to be more specific, he's a host built by Ford in his dead partner's image. As proof, the architect showed his loyal creation a photo of three men: a younger version of Ford himself, Arnold (looking exactly like present-day Bernard)… and an unknown third man between them.

We had actually seen this picture before, back in the early episode "The Stray," when Ford was waxing nostalgic to Bernard about his early days in the park with Arnold — except there was one critical difference. The first time we saw it, there were only two people in the photo: Ford and the mystery man, since Bernard's host-mind was ignoring anything that didn't make sense. (Just like he didn't see the door that led to Ford's secret lab until Theresa opened it.) Like the hosts always say, "It doesn't look like anything to me."

At the time, we assumed that John Doe was Arnold, since we weren't yet privy to the information that Arnold actually looked like Bernard. Since we now know that this assumption was obviously incorrect, then the identity of "John Doe" suddenly becomes a mystery. Was he yet another unknown member of the park's founding team? We know Ford kept Arnold's identity hidden even from the Delos executive board; could he also be keeping a secret about a third architect?

Thankfully, you won't even have to wait until Sunday's finale to solve this mystery; some eagle-eyed viewers like Reddit user MvPonder have already done that for us. It turns out that we already know who the third man is. In fact, we've met him before in person, although you may not remember… or least you may not have made the connection between the man in Ford's secret cabin and the man in the photo.

A few weeks after we first saw the picture, in the episode "The Adversary," Bernard learned of the presence of unregistered hosts in an off-limits section of the park, and found a family of four living in a cabin. As the father moved towards him, Bernard asked, "Arnold?" The programmer wasn't just idly wondering if this scowling stranger might happen to be Ford's presumed-dead partner — he thought he was Arnold, since he'd already seen the man's picture before, standing next to Ford himself.

In that episode, Ford explained to Bernard that the family were actually first-generation hosts modeled after his own family, built by his partner as a gift for him before Arnold's death. Apparently Ford has been keeping a picture of himself, his father (who his partner turned into a robot), and his partner (who he would eventually turn into a robot) on his desk this whole time. How sentimental.

That's one tiny question answered… and plenty more still to go before Westworld finishes its freshman season this weekend. Hopefully some of the show's larger mysteries will get solved in equally tidy, satisfying fashion.

More like this
'Who Killed Sara?' Won’t Return For Season 4
By Brad Witter
Grey's Anatomy Fans Refuse To Accept Kaimelia's Shocking Relationship Update
By Brad Witter
The 'It's A Sin' Creator Revealed A Massive Detail That Didn't Make The Final Cut
By El Hunt
Marvel's 'She-Hulk' Trailer Is Finally Here & The Hulk Lends A Big Helping Hand
By Grace Wehniainen
Get Even More From Bustle — Sign Up For The Newsletter