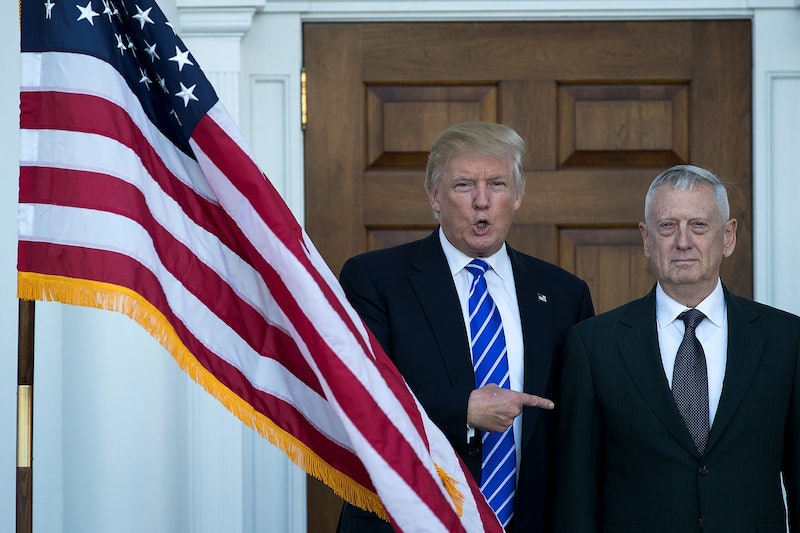 Donald Trump announced one of the most influential cabinet positions for the upcoming administration, and his choice could have a huge impact well beyond the next four years. James Mattis, a retired Marine general, will serve as the secretary of defense, acting as the president's top foreign policy adviser. Consequently, Mattis' views on the Middle East, ISIS, and the global role of the American military in general will shape not only Trump's presidency, but could well establish military precedent for this half of the century. So what will Mattis do about ISIS? He seems to favor sending troops overseas, but he's cautious about doling out military strategy.

Trump long bragged about having a secret plan to defeat ISIS despite not being able to articulate any specifics. Now he'll be passing that pressure on to his new defense secretary, and it will be Mattis' job to oversee any military action against ISIS. Mattis has given sparing, but negative, comments on the military's current strategy against ISIS, but even more sparing on what his own recommendations would be should he be in charge.

Like Trump, Mattis seems to favor the sneak attack in the event that U.S. troops are deployed to Syria or other countries, but he's been cagey on the exact parameters of any potential military operation.

"Whichever strategy is chosen, we should be reticent in telling our adversaries in advance any timeline that governs us or which of our capabilities we will not employ," Mattis said in 2014 while testifying on ISIS for the House Intelligence Committee. "Specifically, if this threat to our nation is determined to be as significant as I believe it is, we may not wish to reassure our enemies in advance that they will not see American ‘boots on the ground.’"

Mattis doesn't necessarily say that he 100 percent believes the United States needs to send troops to fight ISIS, but the implications of this quote seem clear if he's in charge of the military. He believes the threat by ISIS to be significant, and he believes the U.S. strategy as it currently stands to be insufficient, which suggests he could be in favor of military intervention on a larger scale than it already is.

But rather than endorse a policy that at least makes conservative use of military power to avoid sending troops to conflict areas when possible, Mattis has been advocating for a liberal application of American troops worldwide. In a 2015 hearing before the Senate Armed Service Committee, Mattis endorsed the idea of a global U.S. military presence and extreme interventionist policy. “The international order built on the state system is not self‐sustaining,” Mattis said in his opening statement. “It demands tending by an America that leads wisely, standing unapologetically for the freedoms each of us in this room have enjoyed.”

As Trump's top military adviser, Mattis will have a lot of influence over foreign policy, and his call for the United States to "take a firm strategic stance in defense of our values" suggests that he'll advocate for more foreign entanglements.