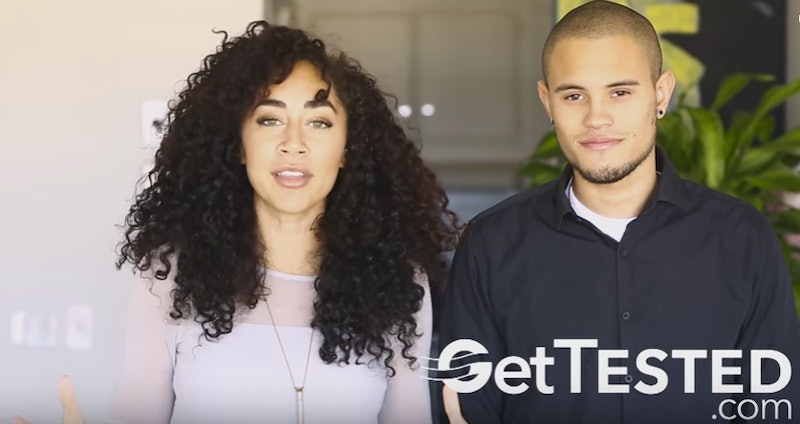 If you're sexually active, there's a pretty solid chance that at some point, you'll get some sort of sexually transmitted infection. According to the American Sexual Health Association, more than half of Americans will get an STI in their lifetime.That percentage might sound scary, but the truth is that many STIs are treatable and not the sex-life death sentence you might imagine. Though contracting an STI isn't really anyone's idea of fun, the fact remains that there's an unfair stigma against people with STIs — but having an STI doesn't make someone dirty or undateable. For some couples, it may be difficult to talk about STIs, simply because the term has such a negative connotation. But as adults, we have to start talking openly about sexual health, because it's so damn important.

Luckily, there are sex-positive people in the spotlight who are helping to raise awareness about the reality of STIs, and encouraging couples to tackle their sexual health together. In a video entitled "The Sexiest Thing We've Ever Done," sex-pos YouTube star Shannon Boodram (more commonly known as Shan Boody) and her partner, Jared Brady, go through the process of doing an at-home STI test together. She posted it on Dec. 1, aka World AIDS Day, aka the perfect day to showcase the importance of STI testing. Boodram partnered with GetTested.com, a service that discreetly delivers complete at-home STD tests for $199, and is even giving one away for free with the hashtag #GoGetTested.

While it might not be as fun as a Netflix marathon, making sure both you and your partner are STI-free is nonetheless a romantic activity. It takes a lot of love and respect to do something so intimate (and a little scary) with your partner, but it also proves that the two of you are mature and take your sexual health seriously. So what does the process of getting tested with your partner actually look like? Here are the highlights from Boodram's video (or you can watch the whole thing here).

What STIs does the kit test for?

The GetTested kit covers seven of the most common STIs: chlamydia, trichomoniasis, gonorrhea, syphilis, HIV, herpes SV2, and hepatitis C. It comes with both a male and female set of tests — the female's includes a swab and blood collection; the male's, a urine test and blood test.

How does it work?

The kit comes with instructions for how to properly administer the tests to yourself (first rule: wash your damn hands). Be prepared to prick your own fingers (band-aids are even included). Ladies, be prepared to swab your downstairs. Gentlemen, be prepared to pee in a cup — although you don't have to do it on camera like Brady.

How do I find out the results?

After you've successfully completed the tests, follow the instructions to properly package them, then simply stow them in the provided FedEx Clinical Pak, slap on the shipping label, and drop it off at your local FedEx. You'll have the results of your tests within five business days. Easy as pie, right?

Why is it important to talk about STIs with your partner?

At the end of the video, Boodram and Brady have an awkward sex Q&A — during which she tells her partner that, back in 2013, she got (and was treated for) chlamydia. Even though all it takes to beat chlamydia is a quick round of antibiotics, it can still be "embarrassing" to admit to a partner that you've had it in the past. Her willingness to open up shows that she trusts her partner not to judge her for something as common as an STI, and that kind of trust is massively important in a relationship.

Ultimately, doing an at-home STI test with your partner is a way to start a conversation about sexual health, and how the two of you together plan to prevent pregnancy, stay STI-free, and have a fulfilling and mutually satisfying sex life. It's not a buzzkill to talk about STIs — it's an activity that takes maturity and respect, and there's nothing sexier.