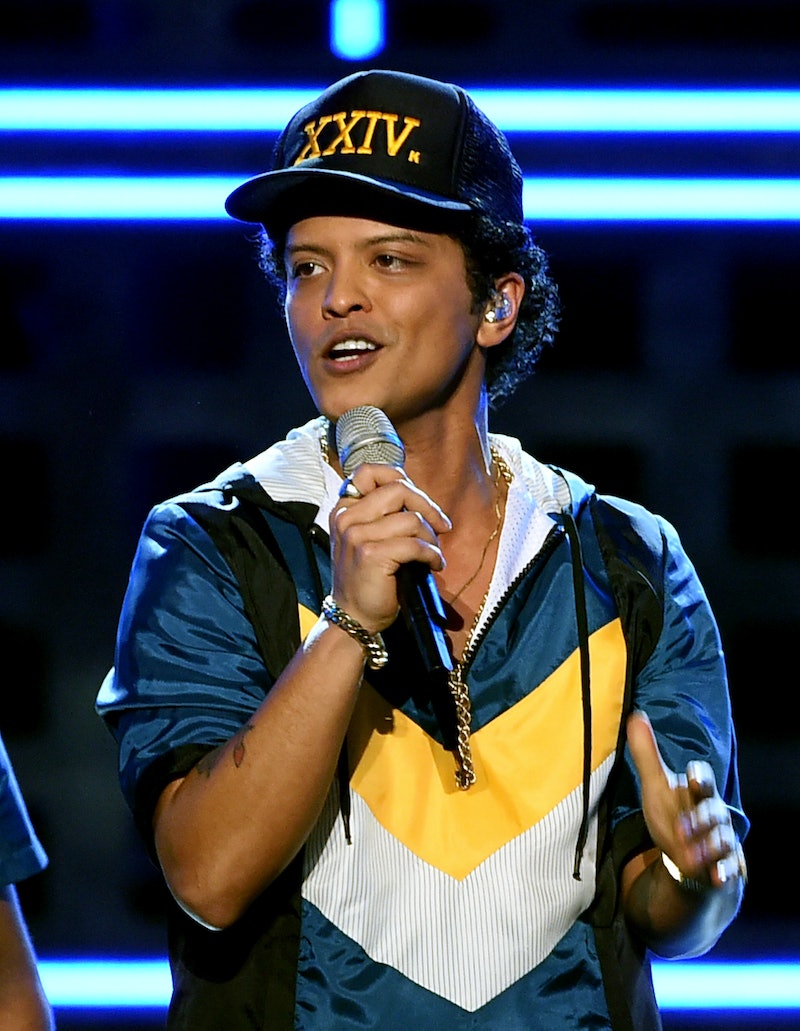 If you happen to be one of those fine people who's been raising their pinkie finger to the moon (at the artist's suggestion) while celebrating the sanguine charms of 24K Magic, then you may well be mystified about why Bruno Mars wasn't nominated for a 2017 Grammy Award — and understandably so. Full of cute throwbacks to old school R&B and hip-hop, along with smooth, dance-inspiring melodies, Mars' latest album 24K Magic feels worthy of a Grammy nomination and possibly even a win. So what's going on? Is there a conspiracy afoot? I mean, what is even happening right now, guys?

Okay, chill. Because thankfully, there's actually a very simple and fair reason as to why Mars' name was absent from the 2017 Grammy nominations. And it also leaves the artist open to a potential future nomination, too. Firstly, as detailed on the award show's official website, there are some strict rules regarding eligibility for the Grammys. In order to receive a nomination, albums must be released between the time frame of Oct. 1, 2015 and Sept. 30, 2016. And sadly, no matter how terrific the album is, 24K Magic was released on Nov. 18, 2016, making it completely ineligible to be considered for any 2017 nominations.

However, that doesn't mean to say that the album will never receive a nomination, as it should instead be eligible for 2018 Grammy Awards consideration. But if you still have your heart set on enjoying some form of Mars magic at this year's awards show, then there's still a potential way for that to happen. Speculation that Mars may perform at the 2017 Grammy Awards has been wished upon by many fans online. And just because he doesn't get to bask in the glory of a single nomination at next years awards, doesn't mean that he can't still do his thing on stage at it.

You might remember, for instance, the Adele performance at the 2016 Grammy Awards. And though her usually astounding and flawless delivery was tarnished by sound problems (proof that bad days can even happen to a goddess like Adele), she still managed to perform despite not being eligible for a single nomination this year. Of course, from the looks of the nominations it seems likely that Adele might be going home with just about every award possible in 2017. So I dearly hope that she's bringing along some form of wagon to help her with that.

Still, 2017 might not be Mars' year for Grammy grabbing, but it definitely looks set to be his year for performing. With his 24K Magic World tour starting in April, a warm-up performance at the Grammy awards in February may be just what he — and the rest of America — needs in order to celebrate his music in the purest manner possible. I will definitely be raising my pinkie finger to the moon should that be the case.