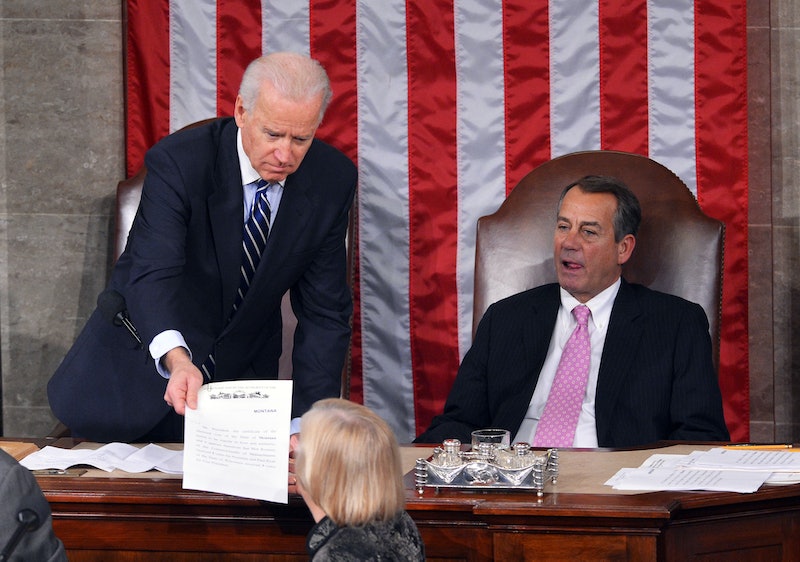 The 2016 United States presidential election has shed a lot of light on the strange, elaborate way this country's electoral processes work. Among these revelations is the role of the individual electors. After the largely unexpected (to put it mildly) victory of Donald Trump — a man who at different points in his campaign threatened to ban Muslims from entering the country and punish women seeking illegal abortions — some electors have pledged to vote differently from their state's popular vote. The result has been a lot of confusion over whether states can require electors to vote for a particular candidate.

The answer to this question is, as with many aspects of the American election system, quite complicated.

Members of the Electoral College who cast a vote for a different candidate than the one residents of their state voted to elect are called "faithless electors." Faithless electors have never changed the outcome of an American election before, but some have successfully cast their renegade votes over the years. In American history, there have been 157 faithless electors in various presidential elections. The most recent, in 2004, was a Minnesota elector who cast a vote for John Edwards instead of John Kerry; the vote is believed to have been cast in mistake, according to an Associated Press report.

Overall, 29 states, plus the District of Columbia, have laws requiring electors to comply by voting for the candidate elected by the people; however, these laws do not actually void the vote in question — instead, they impose fines or even potential criminal punishment for electors who pledge to vote for one candidate and then vote for another.

A smaller number of states, including Michigan, have passed laws theoretically voiding the votes of faithless electors, but these laws have never been tested in court. According to electoral website FairVote.com, "Many constitutional scholars agree that electors remain free agents despite state laws and that, if challenged, such laws would be ruled unconstitutional."

Laws exist on the books in many states that punish faithless electors or would seek to void their votes. However, these laws have usually not been subject to legal challenges, largely because their applicability is so small. If a larger number than usual of faithless electors vote in this election, though, these state laws may finally be challenged on a federal level.