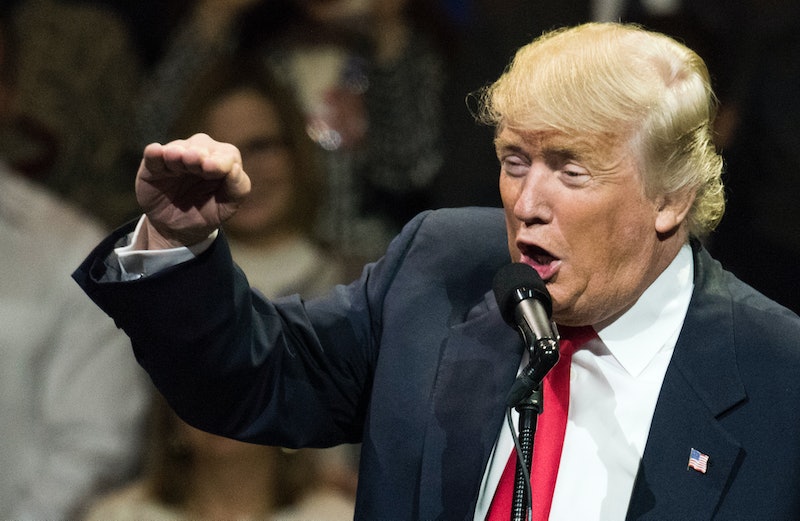 It's highly unlikely that Jill Stein's recount iniatives in Michigan, Pennsylvania and Wisconsin will change the results of the election, but despite that, Donald Trump's allies are trying to stop the vote recounts in all three states. Trump's legal team has filed lawsuits in an attempt to prevent Pennsylvania and Michigan from recounting their presidential ballots, and several Trump PACs did the same in Wisconsin. Nevermind that the arguments his team is making are flatly absurd; the lawsuits have already succeeded in stalling the recount process, thus increasing the likelihood that they won't be completed by the Dec. 13 deadline.

The most recent lawsuit was filed late Thursday in Wisconsin by two Trump-aligned PACs, which argued that a recount — of Wisconsin's ballots would "unjustifiably cast doubt" on Trump's victory in the state. This is madness. In what sense could double-checking the votes possibly "cast doubt" on the process? If the recount confirmed that Trump defeated Hillary Clinton in the state, that would grant more legitimacy to his win. If it discovered that he didn't win, well, that would be a very important thing to discover, and would mean that his victory deserved to have doubt cast on it. There's no scenario in which a recount would be a disservice to the incoming president.

The Michigan recount is currently on hold thanks to a lawsuit from Trump's legal team, which said that Stein waited too long to file the recount petition. Now, there's a decent chance it won't happen at all. On Friday, the state's elections board deadlocked 2-2 on the question of whether to allow the recount to move forward, which will delay the recount until at least Tuesday. But even that might happen: The state's attorney general, a Republican, has asked the state Supreme Court to halt the recount entirely — and Republicans have a 5-2 majority on the Michigan Supreme Court.

Trump's attorneys are also trying to stop the recount in Pennsylvania. His attorneys insist that the recount shouldn't happen, in part, because "there is no evidence" of any tampering with the state's voting system. The irony here is rich, as Trump has made all sorts of allegations of voter fraud — in California, Virginia, New Hampshire others — without presenting any evidence.

The flurry of legal action from Trump and his associates is odd, given that there's almost no chance the recounts will overturn the results of the election. If all three of the recounts turned up in Clinton's favor, that would put her ahead in electoral votes and give her the presidency, but this would require a total of around 74,000 votes to switch candidates across all three states. No statewide recount of the last 15 years has resulted in more than 2,000 votes changing hands — and Trump won Pennsylvania by about 46,000 votes.

Perhaps Trump is just doing his due diligence. But it sure seems like he's disproportionately concerned that the recounts won't turn up in his favor.