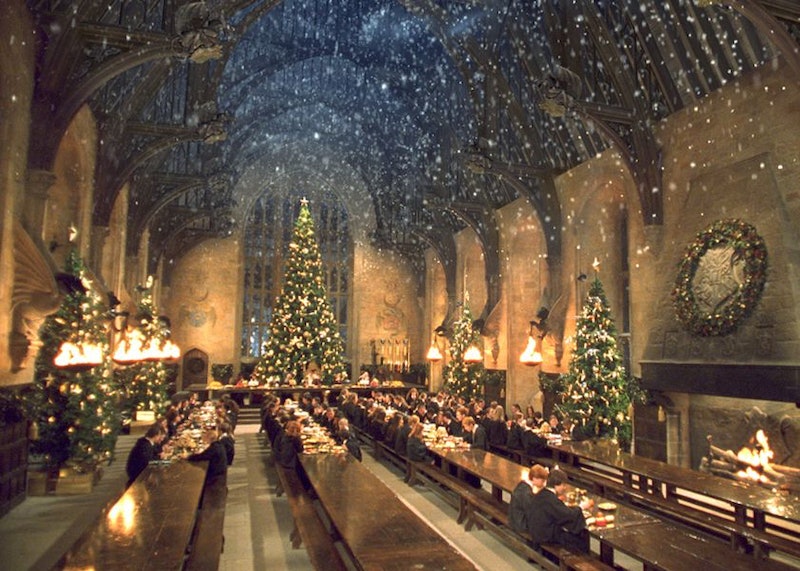 I love to reread Harry Potter during the holidays, because there are so many wonderfully festive moments in the series. From Halloween through the New Year, Harry Potter has scenes full of amazing decorations, feasts, and general holiday spirit. There’s a reason so many people rewatch the movies and dress up in Harry Potter-inspired sweaters for Christmas parties: Harry Potter and friends know how to properly celebrate the holidays.

Sadly, we can’t all spend the season at Hogwarts, but we can reread the books, and it’s a little bit like actually being there. After all, just because the scenes are unfolding in our heads, doesn’t mean they’re not completely real. My brothers and I have a holiday tradition of rewatching Harry Potter and the Sorcerer’s Stone on Christmas Eve, because nothing puts us in a festive mood like the crackling fires and snowy grounds of Hogwarts. There are more moments than just these obvious ones, though — you may have forgotten some of the best holiday scenes from this series, because it’s actually chock full of them.

So whip up a glass of Butterbeer, pull out your worn copies of HP, and relive some of the best holiday moments in Harry Potter.

"On Christmas Eve, Harry went to bed looking forward to the next day for the food and the fun, but not expecting any presents at all. When he woke early in the morning, however, the first thing he saw was a small pile of packages at the foot of his bed.

'Merry Christmas,' said Ron sleepily as Harry scrambled out of bed and pulled on his bathrobe.

When Harry Opened The Invisibility Cloak

"Harry pulled off the cloak and seized the letter. Written in narrow, loopy writing he had never seen before were the following words: Your father left this in my possession before he died. It is time it was returned to you. Use it well. A Very Merry Christmas to you."

"'Hey, look — Harry's got a Weasley sweater, too!' Fred and George were wearing blue sweaters, one with a large yellow F on it, the other a G.

'Harry's is better than ours, though,' said Fred, holding up Harry's sweater. 'She obviously makes more of an effort if you're not family.'

'Why aren't you wearing yours, Ron?' George demanded. 'Come on, get it on, they're lovely and warm.'"

"Harry had never in all his life had such a Christmas dinner. A hundred fat, roast turkeys; mountains of roast and boiled potatoes; platters of chipolatas; tureens of buttered peas, silver boats of thick, rich gravy and cranberry sauce — and stacks of wizard crackers every few feet along the table. These fantastic party favors were nothing like the feeble Muggle ones the Dursleys usually bought, with their little plastic toys and their flimsy paper hats inside. Harry pulled a wizard cracker with Fred and it didn't just bang, it went off with a blast like a cannon and engulfed them all in a cloud of blue smoke, while from the inside exploded a rear admiral's hat and several live, white mice."

"The Great Hall looked magnificent. Not only were there a dozen frost-covered Christmas trees and thick streamers of holly and mistletoe crisscrossing the ceiling, but enchanted snow was falling, warm and dry, from the ceiling. Dumbledore led them in a few of his favorite carols, Hagrid booming more and more loudly with every goblet of eggnog he consumed."

"Two weeks before the end of the term, the sky lightened suddenly to a dazzling, opaline white and the muddy grounds were revealed one morning covered in glittering frost. Inside the castle, there was a buzz of Christmas in the air. Professor Flitwick, the Charms teacher, had already decorated his classroom with shimmering lights that turned out to be real, fluttering fairies."

When Harry Received The Marauder's Map

"'Early Christmas present for you, Harry,' he said. Fred pulled something from inside his cloak with a flourish and laid it on one of the desks. It was a large, square, very worn piece of parchment with nothing written on it. Harry, suspecting one of Fred and George's jokes, stared at it."

"Hogsmeade looked like a Christmas card; the little thatched cottages and shops were all covered in a layer of crisp snow; there were holly wreaths on the doors and strings of enchanted candles hanging in the trees."

"Dobby now handed Harry a small package, which turned out to be — socks.

'Dobby is making them himself, sir!' the elf said happily. 'He is buying the wool out of his wages, sir!' The left sock was bright red and had a pattern of broomsticks upon it; the right sock was green with a pattern of Snitches."

"It was Hermione. But she didn’t look like Hermione at all. She had done something with her hair; it was no longer bushy but sleek and shiny, and twisted up into an elegant knot at the back of her head. She was wearing robes made of a floaty, periwinkle-blue material, and she was holding herself differently, somehow — or maybe it was merely the absence of the twenty or so books she usually had slung over her back."

"Harry arrived early in the Room of Requirement for the last D.A. meeting before the holidays and was very glad he had, because when the lamps burst into light he saw that Dobby had taken it upon himself to decorate the place for Christmas. He could tell the elf had done it, because nobody else would have strung a hundred golden baubles from the ceiling, each showing a picture of Harry’s face and bearing the legend HAVE A VERY HARRY CHRISTMAS!"

"Sirius’s delight at having the house full again, and especially at having Harry back, was infectious. He was no longer their sullen host of the summer; now he seemed determined that everyone should enjoy themselves as much, if not more, than they would have done at Hogwarts, and he worked tirelessly in the run-up to Christmas Day, cleaning and decorating with their help, so that by the time they all went to bed on Christmas Eve the house was barely recognizable. The tarnished chandeliers were no longer hung with cobwebs but with garlands of holly and gold and silver streamers; magical snow glittered in heaps over the threadbare carpets; a great Christmas tree, obtained by Mundungus and decorated with live fairies, blocked Sirius’s family tree from view; and even the stuffed elf heads on the hall wall wore Father Christmas hats and beards."

Christmas At The Burrow

"The Weasleys and their guests were sitting in the living room, which Ginny had decorated so lavishly that it was rather like sitting in a paper-chain explosion. Fred, George, Harry, and Ron were the only ones who knew that the angel on top of the tree was actually a garden gnome that had bitten Fred on the ankle as he pulled up carrots for Christmas dinner. Stupefied, painted gold, stuffed into a miniature tutu and with small wings glued to its back, it glowered down at them all, the ugliest angel Harry had ever seen, with a large bald head like a potato and rather hairy feet."

"The snow here had become impacted: It was hard and slippery where people had trodden on it all day. Villagers were crisscrossing in front of them, their figures briefly illuminated by streetlamps. They heard a snatch of laughter and pop music as the pub door opened and closed; then they heard a carol start up inside the little church.

More like this
The 20 Best Audiobooks To Fall Asleep To
By Aoife Hanna and K.W. Colyard
'Bridgerton' Star Nicola Coughlan Confirms Season 3 Will Focus On Colin & Penelope
By Grace Wehniainen and Alyssa Lapid
Candice Carty-Williams’ 'People Person' Tackles Daddy Issues With Warmth
By Sam Rogers
Sadly, 'Fantastic Beasts: The Secrets Of Dumbledore' Isn’t Streaming — Yet
By Arya Roshanian
Get Even More From Bustle — Sign Up For The Newsletter