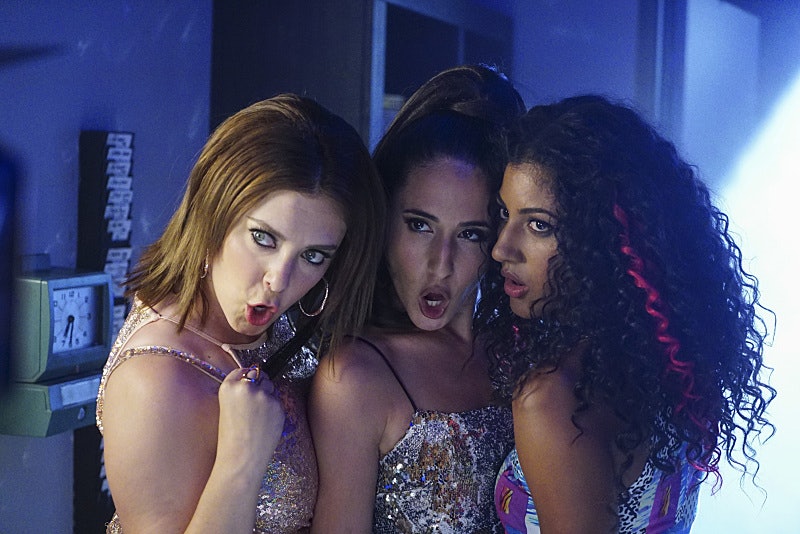 Pop music was alive and well on Friday night, thanks to the '90s girl group-inspired song "Friendtopia" on Crazy Ex-Girlfriend. The song served as a jumping-off point for Rebecca, Valencia, and Heather to celebrate their newly formed girl squad. While celebrating with an inaugural selfie during a girls night out at Home Base, Rebecca fantasized about her new girl gang and what makes friendship between a group of women so special. While Crazy Ex-Girlfriend has explored female friendship and the nuances therein before, this was the first time we got a closer look at how Rebecca functions as part of a functional friend group, rather than in a one-on-one relationship.

The opening chords of "Friendtopia" immediately recalled the Spice Girls and their classic jam "Wannabe," which is the ultimate celebratory anthem about female friendship (well, for Millenials, anyway). As Rebecca, Valencia, and Heather emerged from the Home Base bathroom, each uniquely styled to emphasize their personality, they begin to sing about various activities female friend groups engage in. Those activities are albeit hilariously stereotypical, like sipping rosé, trash talking ex-boyfriends, and unironically watching Hocus Pocus but it worked. It all worked so beautifully onscreen it almost brought a tear to my eye.

When the girls each got a turn to announce their alter-ego and defining characteristics within the girl groups, it cemented the Spice Girls homage and drove home the notion that within a large group of women, each member must assume an archetypal identity. This, in turn, promoted the flow of goodwill and solidified dynamics unique their the group, which they then tried to force throughout the episode. Rebecca, Valencia, and Heather were forcing themselves to conform to a certain stereotype of womanhood while simultaneously celebrating the ridiculously fun things women do in a group setting. Needless to say, "Friendtopia" might just be the song of the season on Crazy Ex-Girlfriend if only for this reason.

Of course, many women will recognize that this is not true IRL; friendship amongst a group of women is much more nuanced out here in the real world. But watching Rebecca define herself as a man-eater, Heather act like the dangerous one, and Valencia get a little kinky (or weird? I couldn't tell with that one) reminded me that this kind of hyper-stereotyping that was so rote with '90s pop girl groups seems so weird nowadays. Amusing, too, but weird nonetheless.

Defining yourself by a few adjectives and expecting that to serve as a solid communal foundation in a friendship group in unrealistic. We may feel like we have to force ourselves to confine to certain stereotypes, but "Friendtopia" served as a small reminder that women don't need to define themselves so narrowly in order to have friends. It's all just idealized nonsense. What "Friendtopia" did was poke fun at that notion while still serving us some delightful '90s realness and that, my friends, is what I consider the hallmarks of a fantastic Crazy Ex-Girlfriend song. Realness and reality, all rolled into one.