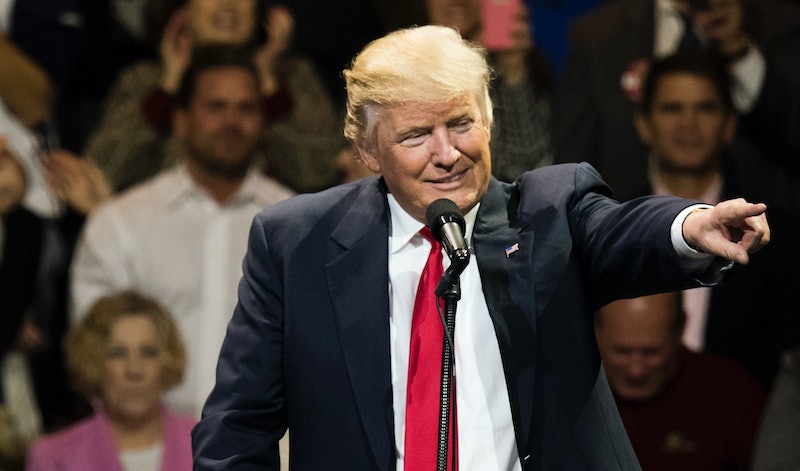 Donald Trump caused a stir on Friday when he broke decades of presidential protocol by taking a call from Taiwan's President Tsai Ing-wen, which could ultimately put diplomatic relations with China in jeopardy. And of course, as criticism of the move poured in, the president-elect was ready with a tweeted defense of his actions. Trump's response to the Taiwan call controversy is exactly what we've come to expect from the Donald, but it shows he's not taking the criticism well.

As the Washington Post noted, the contact between Trump and Ing-wen is the first "known contact" between the presidents of Taiwan and the U.S. since before 1979, the year that the U.S. cut off diplomatic relations with the island. China considers Taiwan a province, and communicating with Taiwan is a major pivot from U.S. diplomatic relations in Asia.

According to the Post, the call came at an extremely tense time between China and Taiwan. Ing-wen was elected to lead the island government earlier this year, a controversial move considering she does not recognize a unified China. Ing-wen's election caused Beijing to completely cease communication with Taiwan.

All of this might signal to the president-elect that it's probably not a good idea to take calls from someone who has angered one of the biggest world powers. But no, this is Trump, and, as you might expect, he thinks it really isn't his fault.

He added that even if it were his fault, the whole thing about taking the call is pretty silly to begin with"

NBC News reported that this call was no surprise for the Trump team. Taiwanese presidential spokesperson Alex Huang told NBC that the call had been prearranged. So it's not as if Trump glanced down at his phone and picked up some random unknown number.

Trump's transition team said that the two leaders congratulated each other on their prospective wins, and talked about "the close economic, political, and security ties" between Taiwan and the United States. It's unclear if that means that Trump is preparing to derail Chinese relations by taking up talks with Taiwan.

Meanwhile, a spokesperson for the White House's National Security Council told NBC that it is still committed to its "one China" policy. In other words, that it does not recognize Taiwan as an independent government from China. It remains to be seen if Trump plans to follow through, but I have a feeling that he'll let his Twitter followers know.