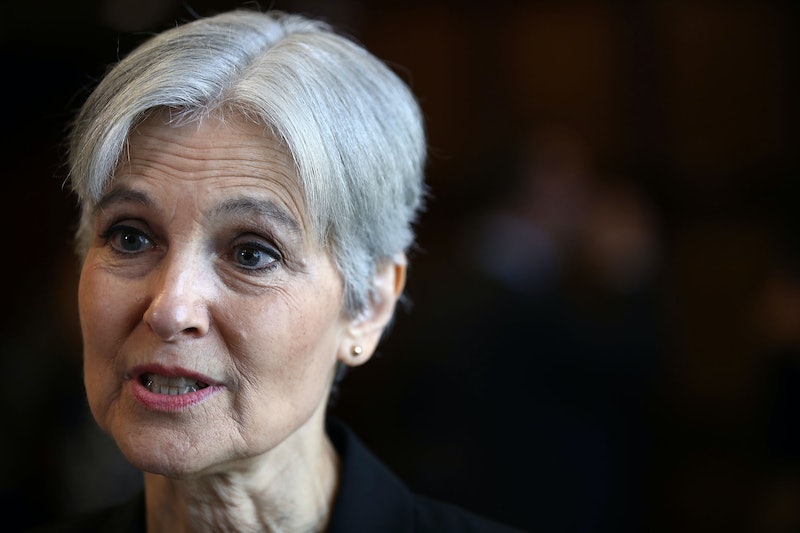 Well, that was anti-climactic. According to reports from multiple outlets, 2016 Green Party presidential nominee Jill Stein has halted her Pennsylvania recount efforts, bringing any chance (however remote it was) of flipping Donald Trump's electoral college majority to an end. Stein has raised nearly seven million dollars since announcing her plan last month to force recounts in three crucial swings states ― Michigan, Wisconsin, and Pennsylvania ― but the only way for Trump's electoral vote total to dip under the winning 270 threshold was for all three of those states to flip from Trump to Clinton. In other words, with the book closed on the Keystone State, this pipe dream scenario for progressives is well and truly over.

It was always a hugely unlikely possibility, for what it's worth, as recounts historically only move vote totals by the hundreds, not thousands, let alone the tens of thousands that would've been necessary to turn Pennsylvania. Although Trump's lead there narrowed considerably this week thanks to more votes being counted since election night ― now down to about 49,000 votes, from about 70,000 previously ― that still represents an unprecedented margin for a recount to undo.

According to the Associated Press, attorneys for the Green Party say they're unable to afford the $1 million bond demanded by a Pennsylvania court, where they were planning to challenge the statewide results on Monday, December 5th.

The upshot here is that, apparently due to lack of funds, the recount effort is now over ― to any extent that could've impacted the outcome, at least. It remains to be seen what will happen in the Wisconsin and Michigan recount efforts, and what will happen to any of the remaining funds Stein has at her disposal, as the expenses they've incurred so far are not clear. The recount effort's fundraising goal has been revised upwards dramatically in recent days, climbing from an initial goal of $2.5 million all the way to $9.5 million.

In short, if you're a progressive who was hoping that Stein and the Green Party could somehow play an unexpected role in toppling Trump's victory weeks after election day, this is surely grim news. But if you're opposed to Trump's election and his incoming administration, it's also probably valuable for this chapter of the election season to close, and for attention to shift towards what progressive political coalitions can do next to make things better. However much it may hurt to acknowledge it, barring something utterly unprecedented and unforeseeable (in other words, probably not worth planning for), Trump is going to be inaugurated on January 20th, 2017.