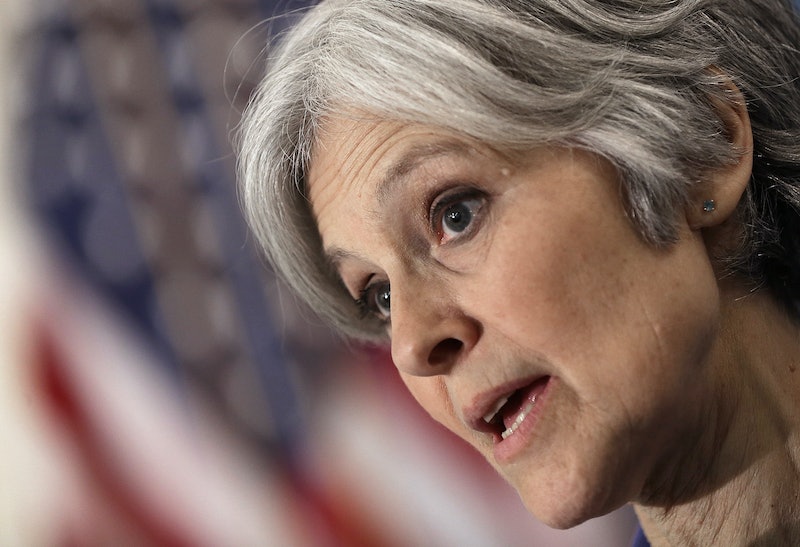 Well gang, it's finally over. On Saturday, Dec. 3, just two days prior to a Pennsylvania court date, the Green Party has halted its recount efforts in the Keystone State. What this means, in practical terms, is that any hope progressives had of seeing Donald Trump's electoral college lead reversed have evaporated, as all three of the states Green Party presidential nominee Jill Stein targeted for recounts — Wisconsin, Michigan, and Pennsylvania — would've needed to flip to Clinton. So, why did Jill Stein drop her recount effort in Pennsylvania?

It's practically the oldest answer in the world: money. As The New York Times reports, lawyers for the Green Party told the court that the petitioners challenging the results in the hopes of forcing a statewide recount were "regular citizens of ordinary means," and that the $1 million bond the court demanded to proceed with the case was prohibitively expensive. Stein, for her part, raised nearly $7 million in recent weeks to finance the recount efforts, with her fundraising goals escalating repeatedly as the high costs involved became more apparent.

In Wisconsin, for example, the price tag for a statewide recount sits at $3.5 million. Stein's initial fundraising goal had been just $2.5 million, but now it's pegged at $9.5 million, nearly three times more than the total amount of money her entire 2016 run brought in.

As for what happens to any leftover money Stein raised, well, here's what her official fundraising page says.

If we raise more than what's needed, the surplus will also go toward election integrity efforts and to promote voting system reform. This is what we did with our surplus in 2004.

There's no further information given about what those "election integrity efforts" might be, but the simple answer that's probably most relevant to anyone who donated is that however much money is left, if any, will remain in the hands of the Green Party going forward. And given that Pennsylvania's 20 electoral votes are safely slotted away for Trump, even the results being overturned in Wisconsin and Michigan — massively unlikely to begin with — would still leave the GOP nominee with 286 electoral votes, well more than the 270 needed to secure the presidency.

In other words, if you've been chasing this unlikeliest of dreams, sorry, but it's all over now. Unless there's some kind of mass defection by Trump electors on Dec. 19 — something utterly unprecedented and likely incredibly destabilizing — he'll be sworn in as president on Jan. 20, 2017.