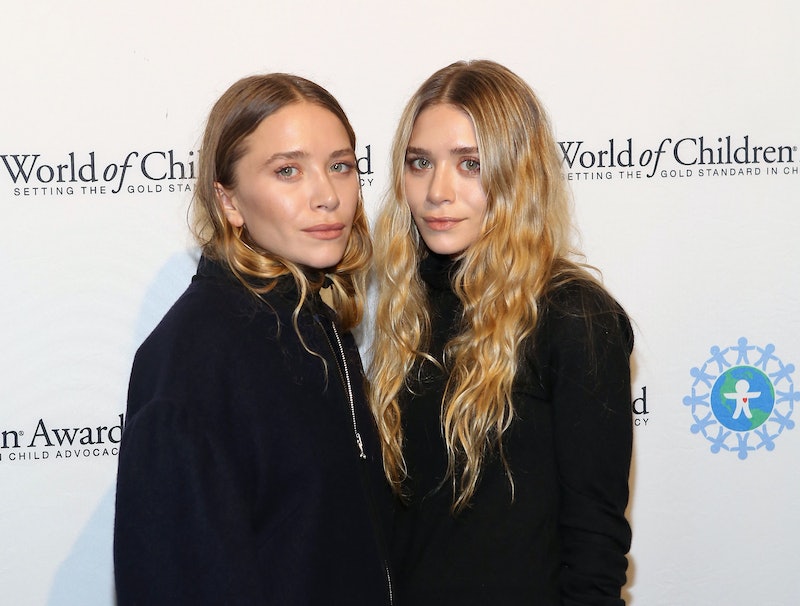 As far as TV revivals go, Fuller House has done a pretty amazing job of getting the original Full House cast back together again. However, Mary-Kate and Ashley Olsen, the twins who got their start in show biz playing the littlest Tanner kid, Michelle, in the original series, chose not to reprise the role in Season 1 of Fuller House. As the next installment of the show gets ready to hit Netflix on Friday, Dec. 9, it's time to start wondering if Mary-Kate and Ashley Olsen will be in Fuller House Season 2.

For those hoping to see Michelle in the flesh this season of Fuller House, you're probably going to be disappointed. Though nothing has been officially announced regarding the Olsen twins' involvement with Season 2 of Fuller House, Lori Loughlin, who will be back to play Becky Katsopolis in the revival once again, dashed fans' dreams during a BUILD series talk in November, according to The Huffington Post. “They’re not on Fuller House for a second season either," Loughlin said. "I’m not in any of those negotiations, nor am I privy to any information, only that I can say they’re not on again for a second season.”

But Loughlin added that if the Olsens did decide to be a part of Fuller House, she expects that there would be a place for them in the series. “I’m sure they would more than welcome them back if they wanted to [do it], but it’s been great for all of us to be reunited,” she said.

Fuller House executive producer Bob Boyett explained why the Olsens weren't a part of Season 1 of the show during an interview with People in January 2016, citing production conflicting with their schedules as they run their fashion labels The Row and Elizabeth and James. According to Boyett, “Ashley said, ‘I have not been in front of a camera since I was 17, and I don’t feel comfortable acting." ... Mary-Kate said, 'It would have to be me because Ash doesn’t want to do it. But the timing is so bad for us.'"

Tanner family patriarch Danny (Bob Saget) explained in the series premiere of Fuller House that Michelle was absent from the family reunion because she's "busy in New York running her fashion empire" before the cast mugged to the camera in a very self-referential sort of way. We'll have to wait and see if there will be any more mentions of Michelle in Season 2.

Initially, series creator Jeff Franklin was optimistic about the Olsens being a part of Fuller House Season 2 during an interview with E! News in January. "I am still hopeful that Mary-Kate or Ashley or both of them will come back and be a part of it, even if it's just for an hour," he said. "We miss that. Everybody does feel that hole in the family. But it's like, all family reunions, there's always somebody that doesn't show up. But hopefully next time around, we'll have them back."

John Stamos, who reprised his role as Jesse Katsopolis in Season 1 of Fuller House and will be back for Season 2, seemed similarly hopeful about the Olsens being a part of the new season right after Netflix renewed the series for Season 2. "They're totally welcome," he told Matt Lauer on The TODAY Show in March. "I was going to see Ashley last night and beg her to be on the show. We would love to have them. I know everyone would love to see them, and I have a good feeling about it."

But Stamos changed his tune about the Olsen twins appearing on Fuller House when he made a joke about them joining the cast of his current show Scream Queens during the FOX series' panel at San Diego Comic-Con in July. "That would be amazing!" he joked, Us Weekly reported at the time. "I can't even get them on my show."

Jodie Sweetin, who reprised her role as Stephanie Tanner in Fuller House, also didn't seem optimistic about the Olsen twins ever appearing on the show when she spoke to ET in August. “We've tried everything,” Sweetin said of trying to get the Olsens to appear on Fuller House. “I think we've kinda given up.”

And the Fuller House cast seems to be getting pretty tired of people wondering if the Olsens will ever be on the show, too. "Stop asking us about Mary-Kate and Ashley!" Candace Cameron Bure, who reprises her role as D.J. Tanner-Fuller on Fuller House, recently told Glamour of the one thing about the series she's tired of talking about. "There are no hard feelings at all, but let’s just move on. It’s been two seasons already. If they show up, great, but if they don’t, we have this awesome, amazing show that the audience isn’t missing anything because it’s so full as it is."

There were also rumors that the twins' younger sister and fellow actress Elizabeth Olsen was approached to play Michelle in Fuller House, but she told E! News in March that neither she nor anyone on her team ever heard about an offer. "I don't know where that started," Elizabeth Olsen said of the rumors. But she did add that saw the series premiere of Fuller House, and that "it was great."

So it seems unlikely that we'll see the Olsens reunite with their Full House fam, not only this season but also if there are any subsequent seasons of the show, too. However, it looks like all of the original Full House cast members who were on Season 1 of Fuller House will be back for Season 2. That means you should expect to see Bure, Sweetin, and Andrea Barber, who plays Kimmy Gibbler, leading the cast once again, in addition to Loughlin, Stamos, Saget, Dave Coulier (Joey Gladstone), and Scott Weinger (Steve), as you can see in the below trailer for Season 2.

Even more original Full House characters will return for Season 2 of Fuller House as well. One of those is Stephanie's friend Gia, who will be played by actress Marla Sokoloff once again, according to E! News. D.J. will also run into her ex-boyfriend Nelson at a high school reunion in Season 2. However, he will not be played by Jason Marsden, the actor who originally portrayed the character on Full House, but by Hal Sparks, E! News confirmed in September.

As for the Olsen twins, they're definitely keeping busy outside of the world of Fuller House. The designers opened their first Elizabeth and James retail store at the Grove in Los Angeles in July, according to the Los Angeles Times. The three-time CFDA winners were nominated for another CFDA Award this year for Womenswear Designer of the Year for their label The Row. Mary-Kate Olsen just celebrated her first wedding anniversary with husband Olivier Sarkozy on Nov. 27. As for Ashley Olsen, she has been linked to art dealer Richard Sachs in recent months, E! News reports.

It looks like Michelle, I mean, Mary-Kate and Ashley Olsen have done quite all right for themselves since Full House, even without appearing on Fuller House.