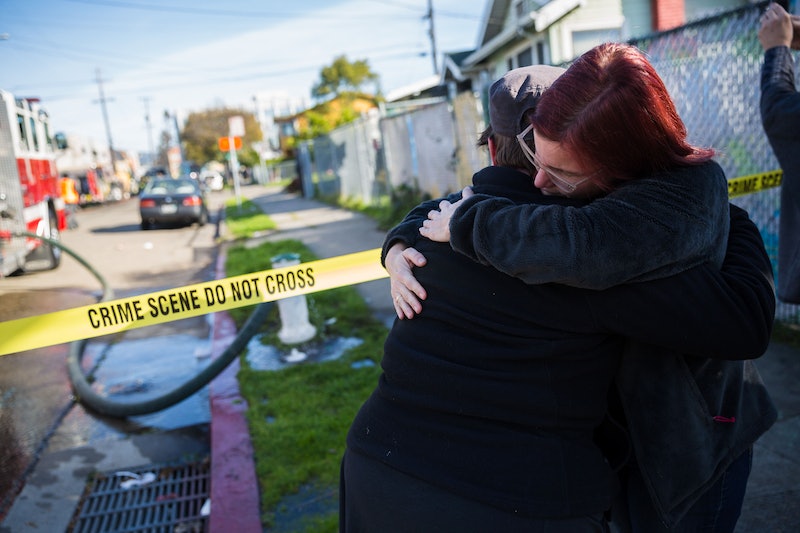 Recovery crews continued to sift through the charred wreckage of Ghost Ship, a warehouse-turned-artists' collective, in Oakland, California, on Sunday as city officials announced the death toll had risen to 30 with more feared dead. The deadly fire that broke out inside the warehouse late Friday during an electronic dance party has left the surrounding community shaken. But there are some concrete ways to help the Oakland Ghost Ship fire victims and those affected by it.

The death toll from a three-alarm fire that engulfed a converted two-story warehouse known to inhabitants and locals as Ghost Ship rose on Sunday as recovery crews worked overnight to remove debris from the scene by hand. City officials said they anticipated the number of victims would rise as recovery personnel had only been able to search about 20 percent of the building. As of Sunday morning, only three victims have been positively identified with their families notified as of Sunday morning, city officials said in a statement. A list compiled by friends and families of missing people suspected to have attended the party at Ghost Ship numbers into the 30s.

Here are some of the ways you can help victims of the Oakland Fire:

Local nonprofit Gray Area Foundation For the Arts has established a fundraiser through YouCaring.com for those affected by the fire. So far, with the help of more than 2,700 donors, the group has managed to raise more than $134,000 for victims. All money raised will be held and distributed by the nonprofit once more information about the scope of its effect and victims is available.

"The priority of this campaign is the fire victim's medical, funeral and health expenses focused on artists and patrons of the event that took place on Dec. 2," Gray Area said in a message posted on the fundraisers' YouCaring.com page. "As soon as we know the full scope of this tragedy we will work to distribute appropriately and of course for funeral expenses the funds will go to the victims' families."

The Oakland A's, Oakland's Major League Baseball team, launched an online fundraiser on YouCaring.com for victims and the families of victims of the Ghost Ship fire with the promise to match donations up to $30,000. The Oakland Raiders have also agreed to match donations up to $30,000 for a total of $60,000 between the two sports teams. As of Sunday afternoon, the two teams had raised more than $50,000 through donations from more than 1,170 donors.

The American Red Cross has, in conjunction with the Alameda County Sherriff's Office, set up the Oakland Fire Family Assistance Center where victims and their families can access grief counseling and other available resources. You can donate to the Red Cross as a means of helping to fund their efforts through their website. The Red Cross also supplied food and drinks to firefighters working to put out the blaze.

A GoFundMe account was created by Reina Lam to raise money for those who lost their work or living space in the fire. According to Lam, the money will go directly to the residents of Ghost Ship. Lam has raised more than $4,800.

5. How To Help If You Live Locally

For those who live locally, a spreadsheet has been created to help facilitate connecting fire victims with donations of food, clothes, bikes, blankets, hot showers, free rides, extra cell phones, places to stay, and shoulders to cry on.

The Oakland Fire Department, Alameda County Sheriff's Department, Oakland Police Department, Alcohol Tobacco and Fire, Cal OSHA, Alameda County Search and Rescue, and the American Red Cross are working together to carry out both recovery and investigation efforts. While efforts have been hindered by the collapse of the building's roof, crews continued to work overnight Saturday to recover bodies from the rubble. According to city officials, "the devastation of the scene has impacted the recovery personnel" and counseling and support teams have been established for them onsite.

Tweeted or emailed messages of gratitude and support may go a long way in lifting the spirits of those working to sift through the fire's wreckage. As a thank you, donations could also be made to the Oakland Firefighters' Random Acts of Kindness initiative, which the Oakland Fire Department uses as a means to give back to the community.