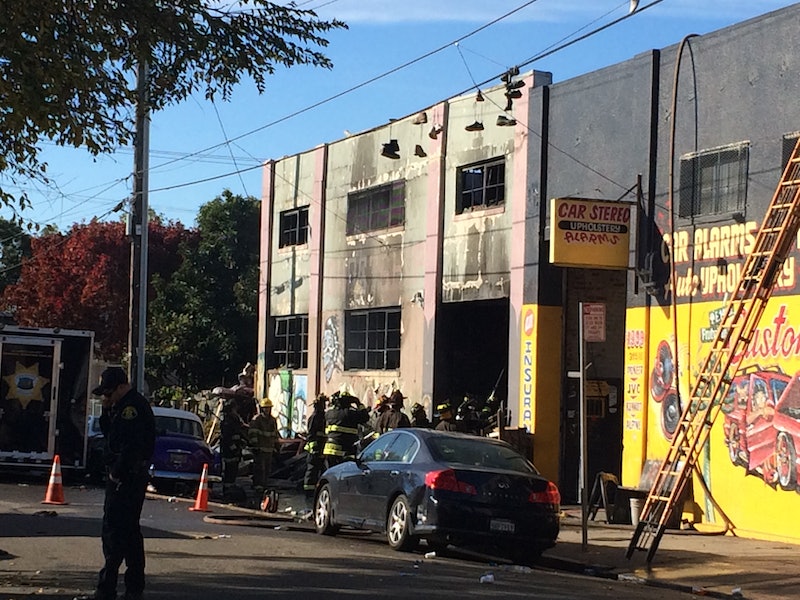 The city of Oakland, California, just suffered a massive tragedy with fatal consequences. A devastating fire at Oakland's "Ghost Ship," a music and art venue in Oakland, has left at least nine people dead, with the authorities anticipating the death could could climb even higher ― at least 40 other people still unaccounted for. It's a horrifying situation, and one that leaves a lot of questions about the building's safety, what happened, and how the disaster could've been prevented or mitigated.

The warehouse venue, which sits at 1305 31st Avenue in Oakland, burst into flames on the night of Friday, Dec. 2, for reasons that are yet unknown. According to law enforcement, nine people were confirmed dead inside the building in relatively short order, but the outstanding 40 people still missing means dozens more could either have escaped the blaze, or could have also have been slain.

Michael Rosen, someone who narrowly averted being caught inside the building when the fire broke out, wrote for The Daily Beast that the construction of the Ghost Ship's interior seemed uniquely vulnerable to this kind of incident. Rosen described the interior as full of dry wood, antique furniture, and old, Persian rugs.

He also described the entrance as a single makeshift staircase, also made of wood, and needing to be carefully negotiated. "The only way to the second floor of the building known as the Ghost Ship was up one wood plank," Rosen wrote. "The makeshift staircase was so steep that I had to plant my feet on small notches, no more than an inch high, to stop from slipping down the incline."

Fortunately, Rosen and his friends departed the Ghost Ship, leaving the party mere minutes before the blaze began. According to Rosen, one of his friends later described the venue as "a tinderbox."

As it stands now, the authorities are still trying to identify anyone killed in the fire, and to locate any people. If you're seeking information about somebody who's still unaccounted for, whether a family member, friend, or loved one, the Oakland Fire Department would like you to call them at (510) 382-3000.

There are already some charitable efforts underway to support those who lost people in the fire ― the Oakland Athletics baseball team, in particular, has a fundraising page up to support the victims of the fire, and will match donations up to $20,000.

According to Alameda county representatives in a press conference held the afternoon after the fire broke out, it's expected that authorities will be working at the scene of the fire for the next 48 hours at least, owing to the inside of the building remaining "not safe."