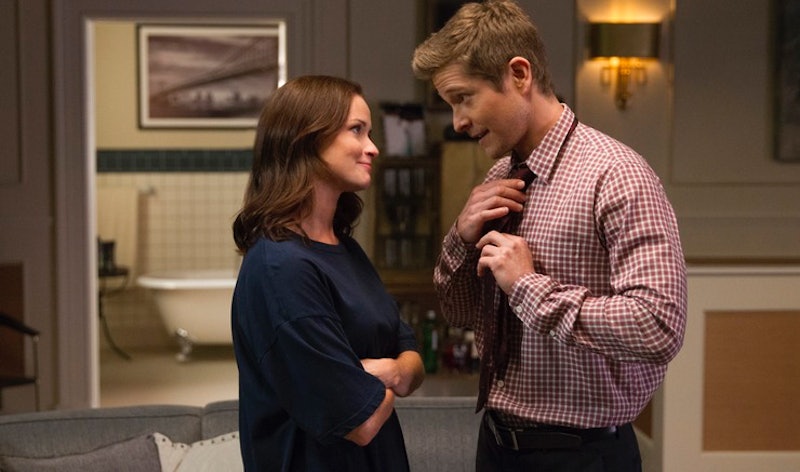 It's been a few weeks since the Gilmore Girls revival hit Netflix, and I still can't stop thinking about it — especially those final four words. It's pretty clear that the story show runner Amy Sherman-Palladino wanted to tell is one that comes full circle, but I was still totally shocked to find out that it all ends with Rory pregnant, likely with Logan's baby. Now, I'm dying for more new episodes so I can find out what happens next, but one thing seems certain: there's a serious parallel being drawn between Logan and Christopher and Luke and Jess, and if the show does happen to continue, I can only assume that parallel will become even more obvious.

It's easy to see how Rory's life is starting to mirror Lorelai's — they both had unexpected pregnancies at inconvenient times in their lives. Lorelai was 16 years old when she found out she was expecting Rory, and Rory is unsettled and lost in her life, trying to figure out what she wants to do after her career plan A backfired. And now, it looks like the men in Rory's life are following the path of the men in Lorelai's too. Not convinced? Let me spell it out for you. It's kind of freaky.

First of all, Christopher and Logan are basically the same person, and I can't believe I haven't realized it sooner. I've always been both anti-Logan and anti-Christopher, so this connection should be way less surprising than it is.

Aside from the obvious, that Christopher and Logan are now both baby daddies to Lorelai and Rory, they also both come from similar backgrounds — wealthy families that put them under heavy expectations. Christopher may not have succumbed to his destiny as quickly as Logan did, but it was definitely a huge factor in both of their lives. Just like Lorelai always had feelings for Christopher and wondered "what if" until their marriage quickly crashed and burned, it seems Rory's felt the same way, although she opted to take herself out of the equation after Logan was clearly not going to leave Odette, despite the fact that he is clearly still in love with Rory, too.

And when it comes to fatherhood? Neither of these men are the ideal candidate. Like Christopher (disappointingly) said in the revival, it was always meant to be Lorelai and Rory as a team, and he never quite lived up to his responsibilities as a father that he should have. And now, not only is Logan marrying someone else, but he doesn't strike me as someone who's ready to drop the life laid out for him to be a dad to Rory's baby, either. And if it sounds like these pieces are fitting together a little too well, it's probably because Sherman-Palladino made these two parallel each other intentionally. While talking to Entertainment Weekly earlier this month, she said:

We wanted Rory to date her father. Every girl has a father issue, and Logan was Christopher. Logan was charming, smart, and not quite the dependable soul that you need. Or, at that time, was not the great dependable soul.

That leaves Jess and Luke, who have always been sort of similar in the way that they're rough around the edges on the outside, but warm and caring on the inside. I could totally see Jess being the one who's there for Rory and her child. Plus, Jess has always been the one to push Rory to be the best possible version of herself and get her to snap out of it when she's going down the wrong path. He did it when she dropped out of Yale, and he did it again when she didn't know what to do with her life in the revival. Luke has also always served as Lorelai's voice of reason. And like Luke, Jess may not be the best at expressing himself, but he's getting better. Like a fine wine, Jess Mariano only improves with age.

And although it seems like Rory only sees Jess as a friend right now, that could change in the future (please, please, please!). That last look through the Gilmores' living room window was proof positive he's still pining for her, and as much as it broke my heart for him, it also made me that much more psyched for them to end up together. I mean, they have to, right? And it seems Scott Patterson agrees with the comparison. In a separate interview with EW, he said:

If Gilmore Girls does come back for more, I hope we do get to see Jess fight for her — and not just because I want more screen time for my favorite member of the cast. The revival's ending threw me for a loop, but it definitely opens up a lot of interesting possibilities for future episodes. Please?!