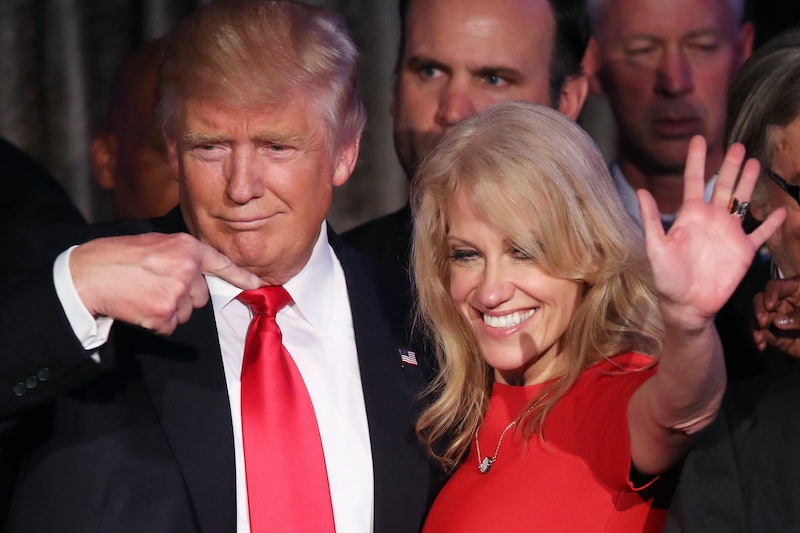 On more than one occasion during his campaign, Donald Trump was asked when, if ever, he'd start to act presidential. The answer was almost always the same: after I win. But almost a month after Trump's election victory many voters are still waiting for the new president-elect to stop tweeting and start demonstrating a more presidential temperament. Yet according to Trump's campaign manager Kellyanne Conway, the question of can Trump act presidential is now moot. Because he won the election, anything Trump does is presidential behavior, Conway said Sunday. Instead of following through on promises to act presidential, will Trump seek to redefine what constitutes presidential behavior?

During a discussion with CNN's Jake Tapper during a forum at Harvard University’s Institute of Politics, Conway was asked if Trump would continue to tweet after being sworn into office on Jan. 20. "I know [Trump's Twitter account] breeds a lot of authenticity but he's also been known to tweet out falsehoods and other liabilities," an audience member asked. "Is that something that he plans to do after inaugurated?"

Conway said the decision was ultimately up to Trump but noted the president-elect viewed his Twitter account as "a very good platform to transmit his messages" and was "a unique person who's been following his instincts and his judgment from the beginning."

Tapper then drew attention to some of Trump's more recent tweets, a few of which he's come under heavy criticism for. Following reports Democratic nominee Hillary Clinton's lead in the popular vote had increased to more than 2.5 million votes, Trump tweeted, without evidence, that millions of people had voted illegally on Nov. 8 causing him to lose the popular vote. Trump then attacked a CNN reporter for writing that his claim was baseless by re-tweeting a 16-year-old supporter. "Is that really presidential behavior?" Tapper asked.

While Trump's off-the cuff-tweeting style has been a hotly debated topic since the day he announced his presidential campaign, the president-elect claimed he would begin to tweet with more restraint now that he had been elected. "If I use it at all, I'm going to do [so] very restrained," Trump said during an interview with 60 Minutes.

While it's hard to know if the tweeted tirades against Saturday Night Live and the New York Times or the multiple Twitter rants Trump has engaged in since then constitute a restrained Trump or not, there's little argument the definition of what constitutes presidential behavior is getting a major overhaul now that the man who brought up the size of his genitals during a primary debate is preparing to move into the White House.

While voters wait to see if Trump has what it takes to act presidential, he is already changing the definition of presidential behavior through a tendency to trade insults, repeat false information, engage in late-night Twitter rants, and allegedly disregard diplomatic protocol.