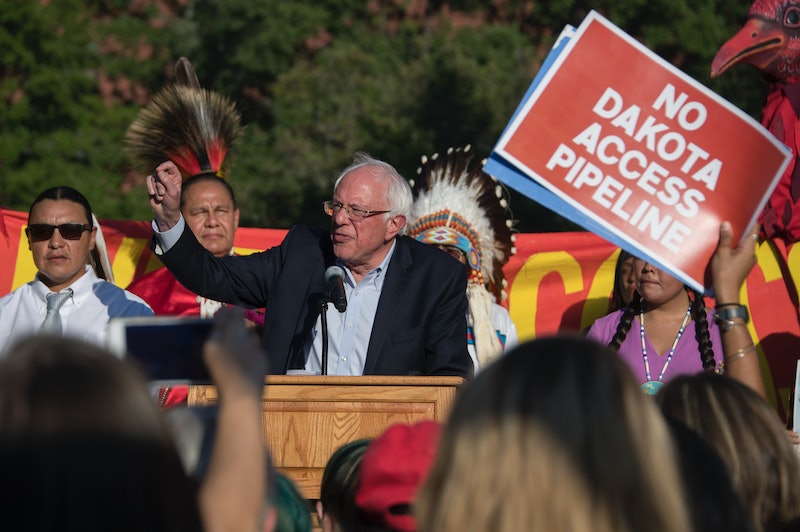 After it was announced that construction of the Dakota Access Pipeline would be halted and alternative routes would be explored, Bernie Sanders' response to Standing Rock's victory was a proud message of appreciation. In a statement released on his website, Sanders thanked President Obama for overseeing the decision to not put the pipeline through the Standing Rock Sioux Tribe's reservation, but he also made very clear that the country needs to be looking toward the future as well:

I appreciate very much President Obama listening to the Native American people and millions of others who believe this pipeline should not be built. In the year 2016, we should not continue to trample on Native American sovereignty. We should not endanger the water supply of millions of people. We should not become more dependent on fossil fuel and accelerate the planetary crisis of climate change. Our job now is to transform our energy system away from fossil fuels, not to produce more greenhouse gas emissions.

Sanders has long been an opponent of the Dakota Access Pipeline. Earlier in November, he joined protesters in Washington, D.C., to speak out against the project. He called for the pipeline to not be built and criticized President-elect Donald Trump for supporting policies that Sanders believes would be devastating to our world.

While Sanders is grateful that construction will be halted while the Army Corps of Engineers explores ways to possibly reroute the pipeline, his statement shows that he's thinking about more than just this one victory. Sanders has always made climate change and protecting the environment some of his biggest issues, and his response to the Dakota Access Pipeline news confirmed that.

The Army Corps of Engineers issued a statement Sunday as well, announcing that it would not approve an easement needed for the pipeline to cross under a lake, therefore creating a need to change the plan. "Although we have had continuing discussion and exchanges of new information with the Standing Rock Sioux and Dakota Access, it's clear that there's more work to do," Jo-Ellen Darcy, the Army's Assistant Secretary for Civil Works, said. "The best way to complete that work responsibly and expeditiously is to explore alternate routes for the pipeline crossing."

Although he wants the United States to step back from reliance on fossil fuels, Sanders will be encouraged to know that the Army Corps of Engineers plans to complete an Environmental Impact Statement and will allow for public input and analysis.