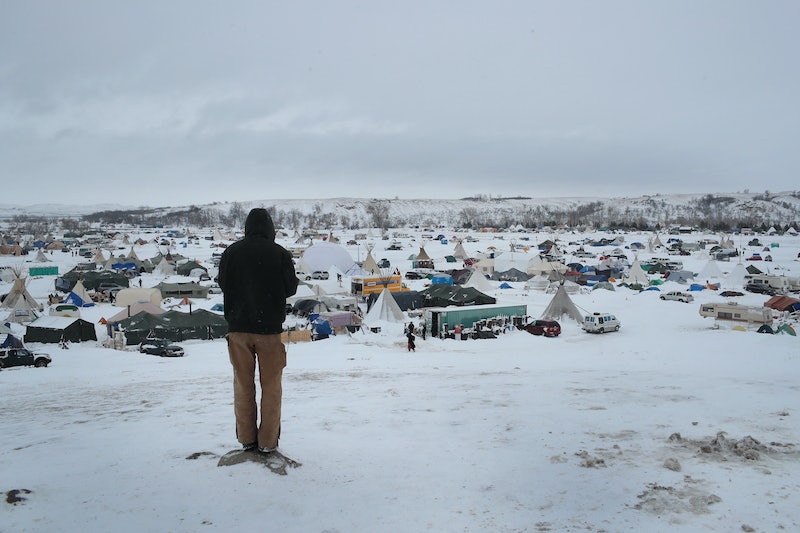 On Sunday, the Army announced that it would deny an easement required for the Dakota Access Pipeline to be built under Lake Oahe on the Standing Rock Sioux Tribe reservation. The decision — which effectively halts construction of the pipeline — was met with celebration from the protestors who have been camped out at Standing Rock and their allies. But none could be more thrilled than the Standing Rock Sioux tribe itself, which released a statement on the decision thanking President Obama, bringing attention to the honor a treaty deserves, and calling on the soon-to-be president to respect the Army's choice.

In the statement from Standing Rock Sioux Tribal Chairman Dave Archambault II, there are repeated references of gratefulness to the Obama administration, a tone that many others struck in their responses to the Dakota Access Pipeline decision as well. Bernie Sanders said in a statement Sunday, "I appreciate very much President Obama listening to the Native American people and millions of others who believe this pipeline should not be built."

And listening to the Native American people is exactly what people should continue to do. In the statement from the Standing Rock Sioux Tribe, Archambault thanked those who stood in solidarity with them and expressed a willingness to stand with any other tribal nation that might need it.

Here's the full statement from the Standing Rock Sioux Tribe.

Today, the U.S. Army Corps of Engineers announced that it will not be granting the easement to cross Lake Oahe for the proposed Dakota Access Pipeline. Instead, the Corps will be undertaking an environmental impact statement to look at possible alternative routes. We wholeheartedly support the decision of the administration and commend with the utmost gratitude the courage it took on the part of President Obama, the Army Corps, the Department of Justice and the Department of the Interior to take steps to correct the course of history and to do the right thing.

The Standing Rock Sioux Tribe and all of Indian Country will be forever grateful to the Obama Administration for this historic decision.

We want to thank everyone who played a role in advocating for this cause. We thank the tribal youth who initiated this movement. We thank the millions of people around the globe who expressed support for our cause. We thank the thousands of people who came to the camps to support us, and the tens of thousands who donated time, talent, and money to our efforts to stand against this pipeline in the name of protecting our water. We especially thank all of the other tribal nations and jurisdictions who stood in solidarity with us, and we stand ready to stand with you if and when your people are in need.

Throughout this effort I have stressed the importance of acting at all times in a peaceful and prayerful manner – and that is how we will respond to this decision. With this decision we look forward to being able to return home and spend the winter with our families and loved ones, many of whom have sacrificed as well. We look forward to celebrating in wopila, in thanks, in the coming days.

We hope that Kelcey [sic] Warren, Governor Dalrymple, and the incoming Trump administration respect this decision and understand the complex process that led us to this point. When it comes to infrastructure development in Indian Country and with respect to treaty lands, we must strive to work together to reach decisions that reflect the multifaceted considerations of tribes.

Treaties are paramount law and must be respected, and we welcome dialogue on how to continue to honor that moving forward. We are not opposed to energy independence, economic development, or national security concerns but we must ensure that these decisions are made with the considerations of our Indigenous peoples.

To our local law enforcement, I hope that we can work together to heal our relationship as we all work to protect the lives and safety of our people. I recognize the extreme stress that the situation caused and look forward to a future that reflects more mutual understanding and respect.

Again, we are deeply appreciative that the Obama Administration took the time and effort to genuinely consider the broad spectrum of tribal concerns. In a system that has continuously been stacked against us from every angle, it took tremendous courage to take a new approach to our nation-to-nation relationship, and we will be forever grateful.

More like this
Celebrities & President Biden Are Enraged By The Leaked Roe v. Wade Decision
By Alyssa Lapid
How To Fight For Reproductive Rights, Based On How Much Time You Have
By Courtney Young
LGBT+ Men Fleeing Afghanistan Were Denied Asylum By The Home Office, New Findings Show
By Sam Ramsden
10 Times Boris Johnson Got It Wrong On Trans Rights
By El Hunt and Sam Ramsden
Get Even More From Bustle — Sign Up For The Newsletter