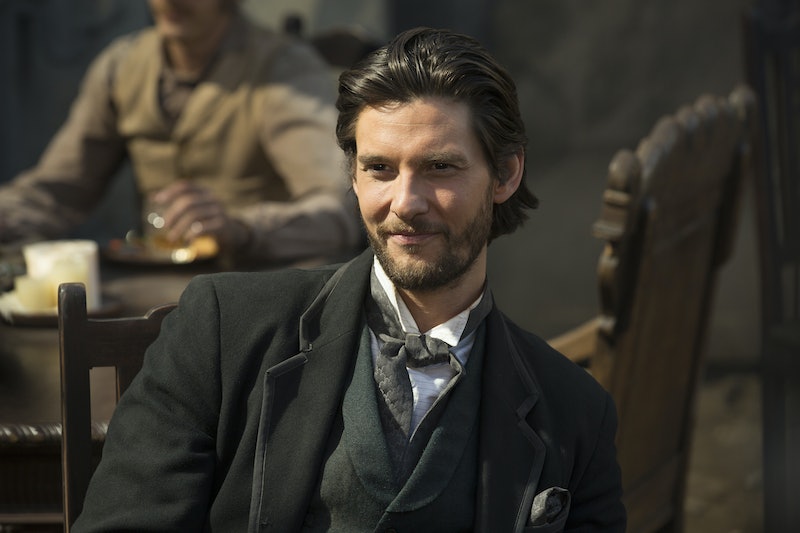 The Season 1 finale of Westworld jumped between timelines at a breakneck pace, confirming major fan theories along the way. However, while it revealed what ultimately happened to many of the season's key players, one character's future was left very unclear, leading me to wonder if Logan is dead on Westworld. The last time we saw Logan, William (aka the young Man in Black) had him naked and tied to a horse. After telling Logan that his father would need someone "more stable" to take over their company, a then-fledgling Delos, William smacked the horse, sending him running off into the distance. We now know that in the present, William runs Delos, owns a majority share of Westworld, and has spent his life looking for meaning within the park, but what happened to Logan?

Even though he is (presumably) not seen at the Delos gala in the finale, I'm inclined to believe that Logan is still alive. Though it can often seem incredibly real, Westworld is a theme park that is constantly monitored by a control room that we've seen countless times throughout the season. Even though Logan was sent into the wilderness with nothing to sustain him, he likely would've been rescued at some point by workers as they monitored his location on their 3D map. I think the reason we don't see Logan with the Man in Black version of William has less to do with Logan's fate, and more to do with William's threat.

Even though Delos belonged to Logan's family, William appears to be in charge in the present, and I think he staged a coup after returning from that first, fateful trip to Westworld. Logan entered the park on a mission to partake in as much debauchery as possible; we saw him partake in meaningless violence and sexual encounters multiple times, and he was very open about his reasons for visiting. William, meanwhile, started his visit very timidly, before massacring tons of hosts and going on a violent mission to find and avenge Dolores.

William's most likely course of action after leaving Westworld was to return to Delos and attribute his own misdeeds to Logan. If he told his future father-in-law that Logan went too far while in the park, or wouldn't be able to properly oversee it from a business perspective given his own activities there, it would have been a very believable story. From there, William — imbued with his new dark side — could take a larger role in the company as he evolved into the person we know as the Man in the Black.

We won't know what happened to Logan with certainty until Westworld returns for Season 2, but I think we haven't seen him in the present timeline because he simply is no longer high-ranking enough at Delos to be part of the story. If William wanted to kill Logan, he could've. Instead, it seems he chose to ruin Logan's career and keep him out of Westworld's future.