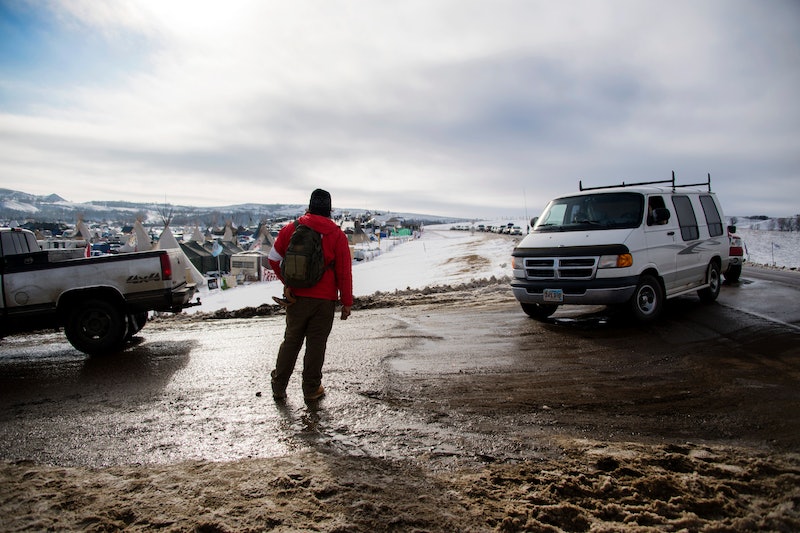 While many are celebrating the apparent win of anti-Dakota Access Pipeline protesters, many on the opposite side of the aisle are grumbling (as they're wont to do) about interference by the Obama administration. For all the political grandstanding and forced partisanship proposed by some on the right, the Dakota Access pipeline isn't a partisan issue — it's one of human rights and the inalienable right to clean drinking water.

Soon after the Army Corps of Engineers announced that they would be denying the permit to move forward with the pipeline in its original route, Republicans critical of the Obama administration as a whole began decrying the decision. North Dakota Rep. Kevin Cramer, a self-described climate change skeptic who was Donald Trump's energy adviser on the campaign trail and is rumored to be a contender for a cabinet position, called President Obama a "lawless president" and accused him of ignoring the law in blocking the DAPL. He went on to suggest that the president's decision is anti-infrastructure. While Cramer's statement is hyperbolic, it's just one example of the type of politicking used by Congressional Republicans who are ravenous for the incoming regime and have exhibited extreme rejection of the president and his center-left policies.

In a political climate more divided than most people have seen in their lifetimes, the Dakota Access pipeline fight has become a flash point for career Obama critics. Citing supposed violence on the part of #NoDAPL protesters, North Dakota Republican Sen. John Hoeven even went so far as to blame the protests on President Obama because he hadn't yet approved the pipeline's permit. Republicans have entered the realm of the absurd when it comes to Obama's denial of the permit — an issue that they claim is exemplary of his administration's "regulatory overreach," but is in reality both an issue of national public interest and within the purview of the presidency.

In framing the fight against the DAPL within the American political binary, Republicans distract from the real issue at stake: the rights to guaranteed clean water which is not only threatened by the pipeline, but has been denied wholesale to the people of Flint, Michigan, who have been without clean drinking water for over 400 days. It's about the continued struggle of indigenous people in the United States and all over the world — a struggle that includes denied sovereignty, ignored treaties, and a legacy of human rights abuses. If we are to politicize the Dakota Access Pipeline, let us make it a politics of human rights. Nothing more, nothing less.