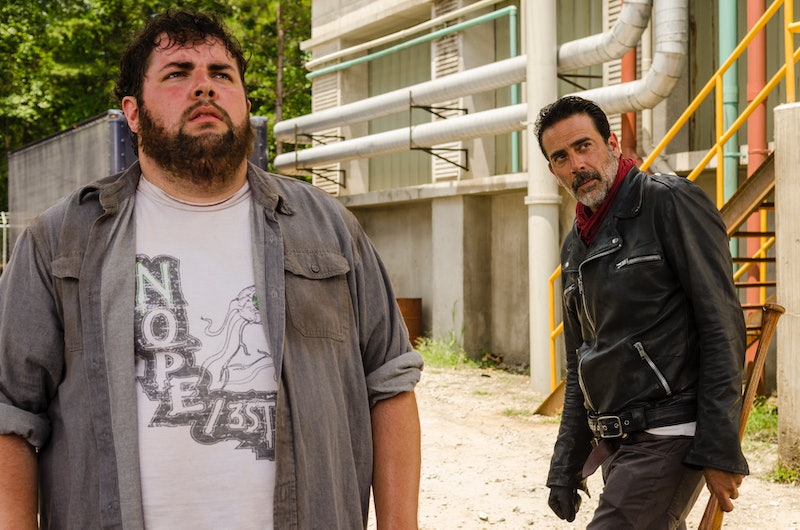 It may have seemed like the Negan of it all on The Walking Dead was cooling down after the season premiere and Daryl's subsequent imprisonment, but that is definitely not the case. Thanks to everyone's favorite runaway Carl Grimes, Negan got to show off the extent of his weird. Also, does Negan want to move to Alexandria on The Walking Dead ? His threat to Carl at the end of Sunday's episode may have revealed a sickening change in his plan.

After Carl attempted to take on the Saviors single-handedly, Negan took the budding action hero under his wing. Carl gets points for bravery but the whole thing backfired pretty spectacularly. Negan got Rick's son to a place vulnerable enough to let him back into his home in Alexandria... and now Negan knows about Judith. Come on! The one thing you hide is the baby. Carl had asked Negan a few times why Negan hadn't already killed him and/or his father. At the end of the episode, Negan suggested that maybe little Grimes was right.

Having already taken their resources, it's possible that Negan and the Saviors may want to invade Alexandria next. It is a nice setup that's much more "normal" looking than other survivor communities we've seen in the area. Even powdered lemonade is charming when you're rocking on the front porch. Is Negan trying to provoke a war with Rick and Alexandria? You'd think he wouldn't have to try so hard. The man has a harem of wives right out of Mad Max: Fury Road, likes to burn faces off with an iron almost as much as Lucille likes to bash in heads, and is draining the area of resources. There's not a lot to like with Negan.

The best thing to come out of this whole adventure, in my opinion, is that Carl now has a lot of information about the Saviors and the Sanctuary. He has seen the operation. He knows some of the rules and some of the players. He has intel on Daryl's status. That said, hopefully Carl wasn't tempted by the lifestyle. Let's also hope that, if Negan does decide to settle down in the 'burbs, he doesn't make like Rumpelstiltskin and start stealing babies — or worse.