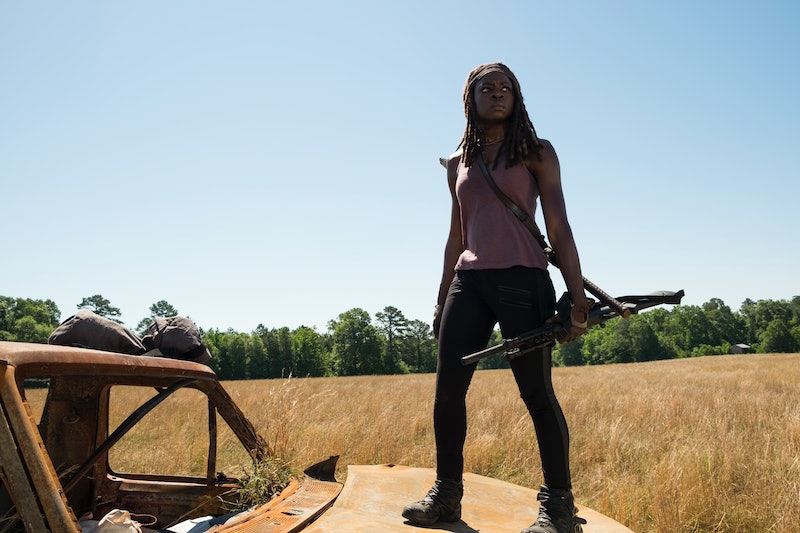 The pieces are falling into place nicely for The Walking Dead midseason finale. Several survivors are ready to take arms against Negan, and it's about time. Jesus has become a secret agent, Rosita has her single bullet, Rick and Aaron found an impressive stash, and even Michonne could kill Negan on The Walking Dead if she keeps playing her cards right.

For once, I'm not mad that the group is separated. While they work better as a team, Negan has emotionally broken the survivors. They need to heal at their own pace and then regroup. Some are doing their best to survive and "serve" the Saviors, some are taking rash action, and others are quietly plotting revenge. Michonne, like Daryl before her, is a bit of a loner at heart. She needed to take some time to herself. After discovering that the Saviors burned the mattresses they took from Alexandria, something in her snapped, and she started tracking them. The old Michonne is back — there were even two walkers flanking her at the beginning of the episode that, visually, looked like her "pets" from Season 2.

Towards the end of the episode, she hijacked a lone savior's car and told its red-headed driver to take her to Negan. Little do they know, Negan is not at home. It's likely that he won't be back at the Sanctuary when the two women return. Maybe she can at least rescue Daryl. That said, if anyone were to kill Negan without wasting any time, it's Michonne. I can't see her following Negan around like a puppy, or allowing cheery music to drive her insane. She could win where Carl and Daryl have failed. It's nice to see someone on our side take control.

I don't particularly care who kills Negan as long as it happens soon — though, if the comics are any indication, it probably won't. Everyone has motive. Now, like a post-apocalyptic game of Clue, everyone is beginning to acquire weapons. The race to kill Negan is on, and at least Michonne is on the right track.