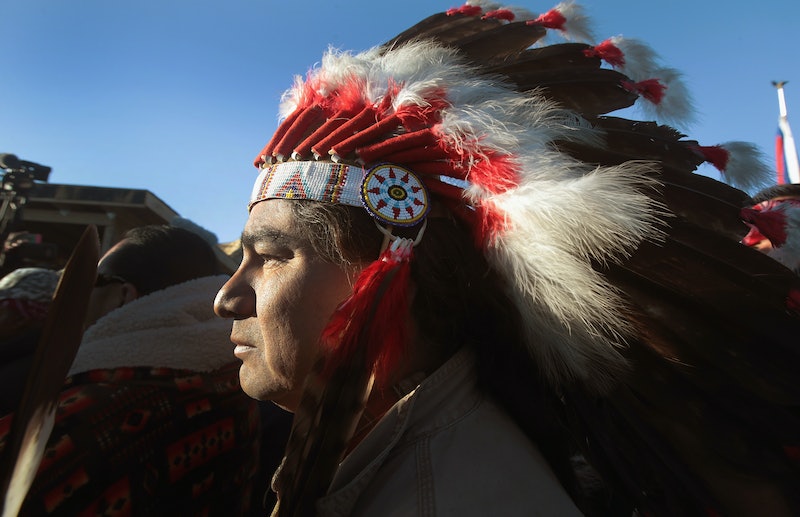 Following news that the Army Corps of Engineers will block current plans for the Dakota Access Pipeline that place it near the Standing Rock Sioux reservation and under Lake Oahe, the groups behind the pipeline announced that they intend to complete the pipeline without rerouting. Following the Army Corps' announcement, Energy Transfer Partners won't back down from the DAPL, proving that protesters still have a lot of work ahead of them to ensure a pipeline isn't built underneath the Standing Rock Sioux's water source.

In a surprisingly political statement released after the Obama administration announced it "will not grant easement" for the pipeline to cross under Lake Oahe (a reservoir for the Missouri River that constitutes the Standing Rock Sioux's water source), Energy Transfer Partners and Sunoco Logistics Partners responded in defense of their actions regarding the pipeline, insisting on their original plans:

As stated all along, ETP and SXL are fully committed to ensuring that this vital project is brought to completion and fully expect to complete construction of the pipeline without any additional rerouting in and around Lake Oahe. Nothing this Administration has done today changes that in any way.

The strongly-worded press release also touches on an important aspect of the protesters' supposed victory: that rather than legally stopping the pipeline, the announcement on Dec. 4 merely stalls the pipeline's initial trajectory until President Obama leaves office in January.

ETP's statement in response to the DAPL decision at best promises major pushback to a move made by the sitting president, and at worst implies potential defiance of a major political decision (albeit one that isn't legally-binding). With its use of right-wing language, his statement is a dog whistle to the many pro-DAPL Republicans who are attempting to shoehorn a human rights issue into the realm of electoral politics. ETP asserted that the Army announcement "is a 'policy decision' – Washington code for a political decision" and goes on to claim that "this is nothing new from this Administration," leaving little doubt of the company's opinion of President Obama.

The bottom line of ETP's press release is clear: not even the president can stop them from completing the Dakota Access Pipeline in its original form. While anti-DAPL activists and their allies should consider the permit denial a victory, ETP's reaction proves there's much to be done before the "black snake" that is the pipeline is finally put to rest.

Below is the full text of the press release.

Energy Transfer Partners, L.P. (NYSE: ETP) and Sunoco Logistics Partners L.P. (NYSE: SXL) announced that the Administration’s statement today that it would not at this time issue an “easement” to Dakota Access Pipeline is a purely political action – which the Administration concedes when it states it has made a “policy decision” – Washington code for a political decision. This is nothing new from this Administration, since over the last four months the Administration has demonstrated by its action and inaction that it intended to delay a decision in this matter until President Obama is out of office.

For more than three years now, Dakota Access Pipeline has done nothing but play by the rules. The Army Corps of Engineers agrees, and has said so publicly and in federal court filings. The Corps’ review process and its decisions have been ratified by two federal courts. The Army Corps confirmed this again today when it stated its “policy decision” does “not alter the Army’s position that the Corps’ prior reviews and actions have comported with legal requirements.”

In spite of consistently stating at every turn that the permit for the crossing of the Missouri River at Lake Oahe granted in July 2016, comported with all legal requirements, including the use of an environmental assessment, rather than an environmental impact statement, the Army Corps now seeks to engage in additional review and analysis of alternative locations for the pipeline.

The White House’s directive today to the Corps for further delay is just the latest in a series of overt and transparent political actions by an administration which has abandoned the rule of law in favor of currying favor with a narrow and extreme political constituency.

As stated all along, ETP and SXL are fully committed to ensuring that this vital project is brought to completion and fully expect to complete construction of the pipeline without any additional rerouting in and around Lake Oahe. Nothing this Administration has done today changes that in any way.