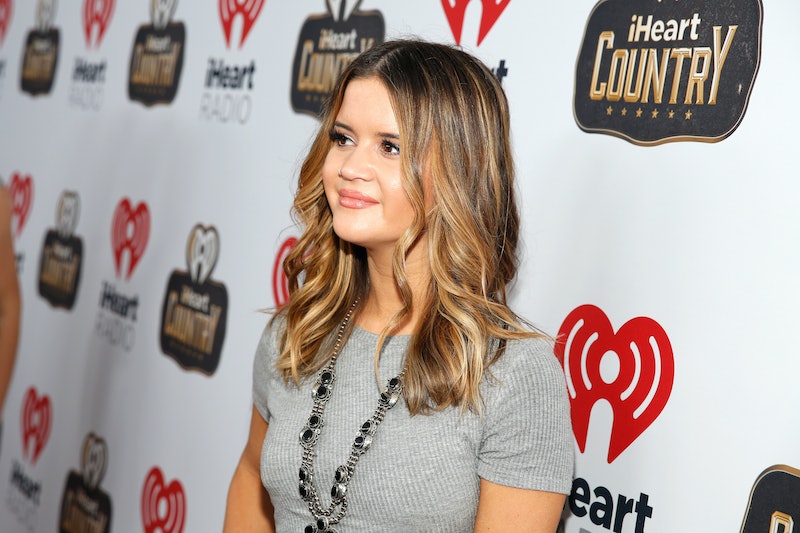 When I saw Saturday Night Live's recent announcement for an upcoming musical guest, I was immediately on board and ready to love her. But who is Maren Morris? The long-running NBC show revealed Monday that Morris would be featured on the Saturday Night Live Dec. 10 show, which will be hosted by wrestler John Cena. Obviously, now is the perfect time to get familiar with the artist.

She's a 26-year-old rising star in the country music scene, who's about to blow up big time. The song propelling Morris' rise to fame is "My Church," but she's actually been on the scene since 2005. In fact, she's released four albums, only the most recent of which, 2016's HERO, was on a major record label. Of course she's a talented artist, but the thing that strikes me most about Morris is her determination and resourcefulness. "My Church" was one of five songs that she self-released to Spotify in August 2015. The EP garnered so much attention — 2.5 million streams in slightly over a month — that it netted her a record deal with Sony Music Nashville. That, in turn, led to her June 2016 album HERO , and all the success she's seeing today.

Morris now has almost 60,000 Twitter followers, but, as of this writing, the tweet announcing the release of "My Church" to Spotify has just 50 likes and 14 retweets. What an incredible journey.

It's a journey that's moved quickly for the singer, rocketing her to fame almost overnight after over a decade in the industry. Luckily, she's had some experience with critical acclaim in the industry already: writing credits on songs like Tim McGraw's "Last Turn Home" and Kelly Clarkson's "Second Wind" had earned her 2012 New Music Seminar’s "Artist on the Verge" Award. Otherwise, I can imagine this being really overwhelming for a true newcomer.

But Morris seems to have her wits more than about her, and her stream of success shows no sign of slowing. HERO rose to #5 on the Billboard 200 chart, and topped the Top Country Albums chart. (And she co-wrote every single song on the album, so the credit is all hers.) She also set out as the opener for Keith Urban's 2016 Ripcord World Tour the same week that her album was released, sang last Friday with Alicia Keys on CMT Crossroads, and was named New Artist of the Year at November's 50th CMA Awards.

So 2016 was quite literally her year, and I'm exhausted just thinking about all this. Oh, and 2017 shows no signs of stopping either; Morris' own world tour, the Hero Tour , will launch in February. Phew.

So tune in to SNL this Saturday to wish her bon voyage on her many adventures. You can say you knew her way back when she still had a Saturday night free to do a silly little show on one of the hugest stages in entertainment.