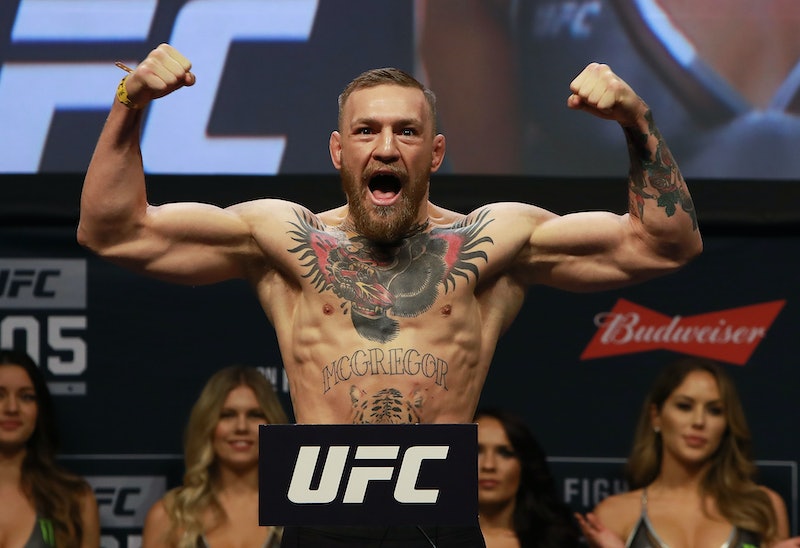 Those little sneaks over at Game of Thrones are already toying with me pretty significantly by pushing back the premiere date for Season 7, but there are more rumors on the horizon that are trying to give me a heart attack. Allegedly, Game of Thrones might cast UFC fighter Conor McGregor in an upcoming role. The 28-year-old Irishman is the first UFC fighter to be the champion in two weight classes at the same time — featherweight and lightweight — and has evinced a desire to take on the undefeated Floyd Mayweather in a boxing match. And now, McGregor might be on track to add an appearance on GoT to his resume as well.

For a moment, I was concerned; basically any time I see a non-actor getting cast in an acting role, I get a little nervous. But then I realize that GoT has actually pulled from the athletic world before, and it worked out quite nicely. I'm referring, of course, to Hafþór Júlíus Björnsson, a professional strongman and former pro basketball player from Iceland, whom you probably know better as Gregor "The Mountain" Clegane.

And, hey, that turned out pretty well. The character of The Mountain is quite literally defined by his size and strength, so it made perfect sense to cast a wider net during casting in order to find someone who looked the part even if they weren't a traditional actor. He had to be an imposing figure, and, when you are an imposing figure, the rest of it just sort of falls into place acting-wise. While it's impossible to know what sort of role Conor McGregor is rumored to be up for in Game of Thrones, I suspect that the show's creators know what they're doing.

According to a source speaking to Belfast Live :

It's been agreed that McGregor will appear in one of the remaining two seasons of Game of Thrones. He was headhunted as it were by HBO, as one of the Game of Thrones directors is a huge UFC fan. They believed that he would be a perfect fit for the show.

At the end of the day, I trust the judgment of creators David Benioff and D.B. Weiss. Even if they hadn't had success with casting an athlete before, in the form of Björnsson, I could still get behind this casting decision. Because, at the end of the day, how is seeing something you like in Conor McGregor during a UFC fight any different than watching an actor audition? A big part of acting is having a confidence in your own skin and inhabiting your body in a distinctive way, so it would make sense to me that athletes are a good measure of the way there even without any training. Especially with the often-brutal nature of the show, having someone who knows how to fight and what fighting looks like could be a very convincing soldier of some kind.

I will say, the fact that McGregor is allegedly only being considered for "one of the remaining two seasons" does suggest that his character wouldn't be quite as good at fighting onscreen as he is in real life. Otherwise, you might expect to see him appear in both. But, in any case, I trust he would be a good fit for the series if the rumor is true.