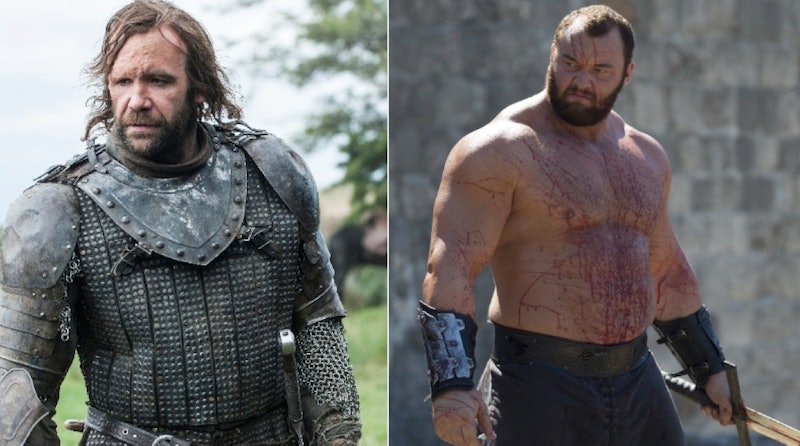 Anyone who has a brother or sister knows that fighting with one's sibling is a fairly common occurrence. However, in the case of The Hound vs. The Mountain on Game of Thrones , the idea of sibling rivalry is taken to an extreme level. (Think a lot less nuggies/wedgies and a lot more bloodshed.) These two characters hate each other with a fiery passion, which started all the way back to when they were just young kids and Ser Gregor shoved Sandor's face into a fire, thus causing his disfigurement. Oh, and did I mention this was all because Sandor was caught playing with Gregor's toy? (Ever heard of sharing, dude?) So yeah, it's safe to say that these two have some issues to work out, which means viewers could still be privy to an epic fight between these two Clegane brothers.

Now, I know what you're thinking: Isn't The Hound dead? Well, he certainly looked a little worse for wear after his battle against Brienne of Tarth back in Season 4. But given that he was still alive when Arya left him to die (rather than killing him herself), there's a fairly good chance that he made it out of there with his life intact. After all, this is Game of Thrones we're talking about, where death is neither certain nor necessarily permanent. So the fact that we didn't actually witness The Hound take his last breath indicates that there's plenty of wiggle room to have him return.

Even GRRM's book series leaves The Hound's fate up for interpretation, hinting that perhaps he made his way to the Quiet Isle monastery to live out the rest of his life in peace and solitude. But that doesn't sound like The Hound we've come to know. Odds are something (or rather someone) will drawn him back to King's Landing so that he can bring swift justice to his brother for his many various sins. Though, judging by the recent makeover Ser Gregor recently received courtesy of Qyburn's experimentation after his battle against Prince Oberyn Martell, I'd say The Hound is going to have his work cutout for him. That Franken-Mountain (or is it Mountain-stein?) creation looks to be a fearsome foe indeed.

He may have taken an oath of silence and vowed his allegiance to Cersei, but that doesn't mean that if his dear brother crossed his path that he wouldn't try and finish what he started all those years ago. Plus, it's not as if The Hound is exactly one of Cersei's favorite person at the moment, given that he quit his duties as Joffrey's protector and fled King's Landing. For all she knows, if he had been around, perhaps Joffrey would still be alive. She could decide to sick Gregor 2.0 on The Hound if she ever catches whiff of where he is.

So don't give up on that dream yet, people. This battle of brothers could still totally happen. The only question is — who would come out as the victor? I don't know about you, but I really want to find out.