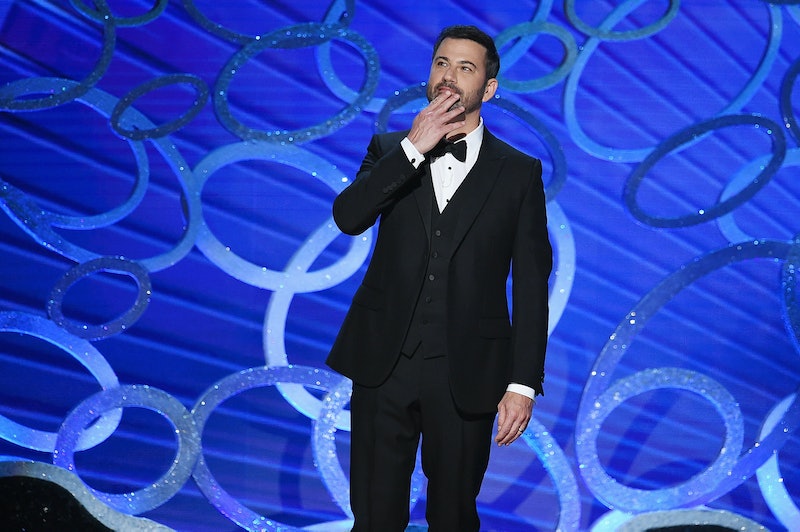 With hard-core award season just around the corner, many were beginning to wonder when announcements would be made as the host for the Academy Awards. But that question was answered Monday when it was announced that Jimmy Kimmel will host the 2017 Oscars. At this point, you probably have a pretty clear image in your brain of the 49-year old in a tuxedo on an empty stage. That might be because he's hosted the Emmys twice, in 2012 and 2016, as well as the 2007 ESPYS, and the American Music Awards a record five times. But, for all his hosting experience, this will be his first time taking the stage at the Oscars, which represents a significant step up by almost any metric. (Luckily, I know he's up for it.)

The Emmys in particular aren't quite as relaxed as, say, the Golden Globes, but they certainly aren't as formal and expectation-laden as The Oscars. The ceremony tends to last between three and hour hours, making it almost a feat of endurance. On top of that, you have to win the audience over early and often with material that appeals to a broad range of people, including the Hollywood elite in attendance. It's a challenge that has scared off many other potential hosts, and even some who have hosted the awards already; Seth MacFarlane has famously said he'll never return, after his hosting in 2013 drew criticism. But I think Jimmy Kimmel is a perfect fit.

Airing on a nightly basis with Jimmy Kimmel Live! has likely helped him build up the muscle of producing a high volume of material, and years of interviewing celebrities will mean he's at home addressing a whole room full of them when the 89th Academy Awards air on ABC on Feb. 26.

He has the perfect blend of self-deprecation and intelligence, paired with a razor-sharp and lightning quick sense of humor I can't wait to see what he brings to the broadcast.