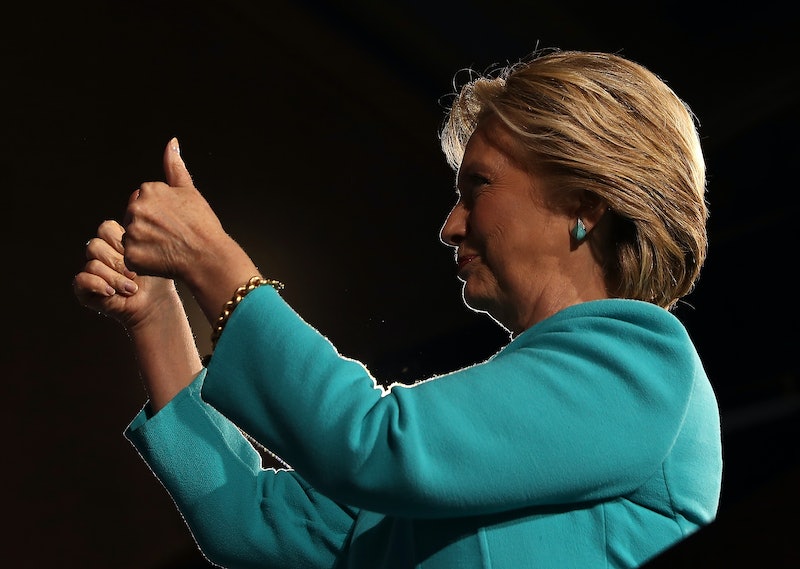 Although she didn't win on Election Day, Hillary Clinton ran an extremely memorable campaign. There were scandals, feuds, and federal investigations, but the former Secretary of State also made history on multiple occasions. In July, she became the first female presidential nominee for a major party, and in November she became the second most voted-for presidential candidate in the United States after Barack Obama — more than any white man to ever run for president. In addition to breaking glass ceilings, Clinton also left a trail of memorable quotes and moments behind.

Clinton has never been a natural performer, which often leads to the perception that she's an untrustworthy person. To many, her speeches came across as overly rehearsed, and her interviews gave the impression of a cautious person who doesn't easily give in to moments of spontaneity. Her forte is working in Washington outside of the public eye, not energizing crowds at campaign rallies or making herself likable in television appearances. But she still managed to have her fair share of sassy, inspirational, and straight-up boss moments.

With 2016 almost behind us, here are 9 of Clinton's best quotes from the past year:

"If fighting for women's health care and paid family leave and equal pay is playing the woman card, then deal me in!"

After Donald Trump claimed that the only reason his opponent was getting any votes was her tendency to "play the woman card," Clinton decided to embrace the quote and make it one of her go-to rallying cries.

Clinton repeated the statement of not being a "natural politician" multiple times during the election. During one appearance on Good Morning America she brought up the subject after being asked about the common perception of her being untrustworthy:

Look, I work really hard to do whatever job I’m given to do. And I know I’m not a natural politician, and I know that it sometimes is more difficult to navigate through the politics and the campaigning than I wish it were. ... I just think the best way for me to answer that is just to keep doing what I’m doing, which is to talk about what I have done and hopefully what I will do. ... When I have a job, the Republicans actually say nice things about me and what a good job I do. And then as soon as I move toward being in an election, all bets are off, and you know, I’m attacked left and right. So I think there is, I’m sure, more that I can do, and I’m just going to do my best to try and break through that.

During an appearance on Between Two Ferns, Clinton showed her funny side. Perhaps one of the most daring moments was when she agreed with Zach Galifianakis about Trump's "white power tie."

ZG: Do you wonder what your opponent might be wearing [to the debate]?HC: I assume he'll wear that red power tie.ZG: Or maybe like a white power tie.HC: That's even more appropriate.

In response to Trump saying she doesn't have stamina, Clinton delivered this epic burn:

As soon as he travels to 112 countries and negotiates a peace deal, a cease fire, a release of dissidents, an opening of new opportunities in nations around the world, or even spends 11 hours testifying in front of a congressional committee, he can talk to me about stamina.

5. "I Had To Learn As A Young Woman To Control My Emotions."

In a post for the popular blog Humans of New York, Hillary spoke about the balancing act of controlling her emotions while not coming across as cold.:

I know that I can be perceived as aloof or cold or unemotional. But I had to learn as a young woman to control my emotions. And that’s a hard path to walk. Because you need to protect yourself, you need to keep steady, but at the same time you don’t want to seem ‘walled off.’ And sometimes I think I come across more in the ‘walled off’ arena. And if I create that perception, then I take responsibility. I don’t view myself as cold or unemotional. And neither do my friends. And neither does my family. But if that sometimes is the perception I create, then I can’t blame people for thinking that.

6. "It's Hard Work To Present Yourself In The Best Possible Way."

In a second post for Humans of New York, Hillary got even more candid about trying to seem natural for the public and not having female role models in the world of politics:

I’m not Barack Obama. I’m not Bill Clinton. Both of them carry themselves with a naturalness that is very appealing to audiences. But I’m married to one and I’ve worked for the other, so I know how hard they work at being natural. It’s not something they just dial in. They work and they practice what they’re going to say. It’s not that they’re trying to be somebody else. But it’s hard work to present yourself in the best possible way. You have to communicate in a way that people say: ‘OK, I get her.’ And that can be more difficult for a woman. Because who are your models? If you want to run for the Senate, or run for the Presidency, most of your role models are going to be men. And what works for them won’t work for you.

Women are seen through a different lens. It’s not bad. It’s just a fact. It’s really quite funny. I’ll go to these events and there will be men speaking before me, and they’ll be pounding the message, and screaming about how we need to win the election. And people will love it. And I want to do the same thing. Because I care about this stuff. But I’ve learned that I can’t be quite so passionate in my presentation. I love to wave my arms, but apparently that’s a little bit scary to people. And I can’t yell too much. It comes across as ‘too loud’ or ‘too shrill’ or ‘too this’ or ‘too that.’ Which is funny, because I’m always convinced that the people in the front row are loving it.

As she became the first woman in history to accept a major party's nomination at the Democratic National Convention, Hillary delivered this powerful line: "When there are no ceilings, the sky's the limit."

Despite losing, Hillary still had the strength to deliver a hopeful message for her young supporters in her concession speech:

To the young people in particular, I hope you will hear this. I have...spent my entire adult life fighting for what I believe in. I have had successes and I have had setbacks. Sometimes really painful ones. Many of you are at the beginning of your professional public and political careers. You will have successes and setbacks, too. This loss hurts but please never stop believing that fighting for what's right is worth it.

9. To All The Little Girls Watching

Last, but not least, Hillary had a message for the little girls who had their hopes pinned on seeing the first female president win in November. "To all the little girls watching this, never doubt that you are powerful and valuable and deserving of every chance and opportunity in the world."

Whether you voted for her or not, you've got to admit these were some awesome moments.