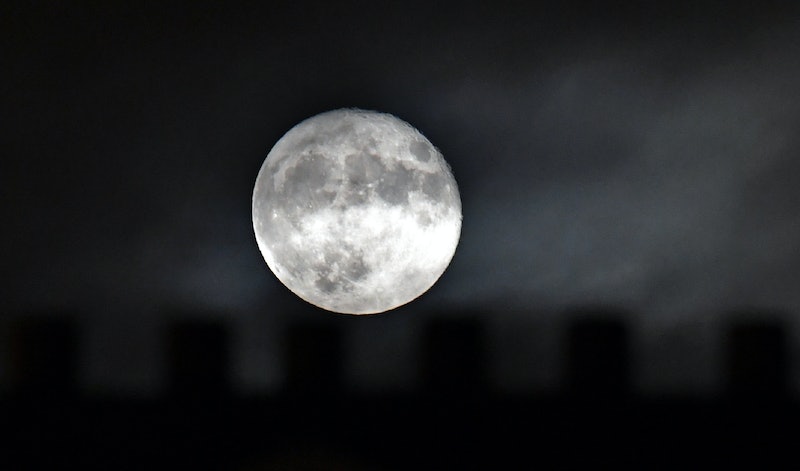 It's official: As the end of 2016 draws near, we're saying goodbye to a lot of the year's events. For those of us who are into the stars and sky, that means we're coming up on our last chance to watch the supermoon in December 2016. That's right: There's just one final supermoon viewing we can catch before 2017 rolls around — and luckily for us, watching the December supermoon is actually pretty simple. Even if you're not well versed in the hard science of astronomy, simply looking up at the moon and stars can be a cool way to connect to our world without cracking open a textbook. Checking out the world around us can also be a good way to relieve stress and remember that we're all just one small part of something much bigger than ourselves — literally and metaphorically.

The final supermoon of 2016 will take place on Dec. 14, according to NASA. This supermoon will coincide with the Geminid meteor shower, which peaks on Dec. 13 and 14. Some astronomers do worry that one will literally outshine the other; the supermoon's heightened size and brightness could cause the meteors to be less visible in the night sky. However, because the meteors can journey anywhere across the sky, it's entirely possible you'll be able to see a good dose of them plus the glorious moon without interruption. We can dream, right?

So, how can you see the final supermoon of 2016? I've broken down the steps below, but thankfully, it's pretty straight forward:

According to Space.com, the final supermoon of 2016 will reach its peak at exactly 7:05 PM EST on Dec. 14. They note, however, that to most viewers, the moon will appear to be at its peak fullness the evening before, on Dec. 13. Most of us will be awake at 7 p.m. anyway, but if you're typically having dinner or at work, it's worth setting an alarm to remind you to peek outside.

Get To An Area Without A Lot Of Obstructions

If you're in an urban area, this will be tough, but if you can get to an area with wide, open sky and not a lot of light pollution, you'll have a clearer view of the moon.

Whether you take pictures on a digital camera, actual film, or use your smartphone, this is a sight you won't want to miss. Luckily, it shouldn't require a telescope or any additional equipment to get a nice view of it.

Unable to actually get outside and catch a good view? No worries. The Virtual Telescope Project is a free online stream that will showcase the supermoon beginning at 16:00 UT (11:00 a.m. EST) on Dec. 13, so if you've got an internet connection and some free time, there is literally no way you can miss it.

More like this
How To See The Lunar Eclipse On May 15-16, 2022
By Kaitlyn Wylde
The 6 Best Balaclavas To Keep Your Face, Head & Neck Comfortably Warm
By Jenny White
Here's Your Daily Horoscope For May 18, 2022
By Mecca Woods
Are Gemini & Scorpio Compatible In A Relationship?
By Kristine Fellizar
Get Even More From Bustle — Sign Up For The Newsletter