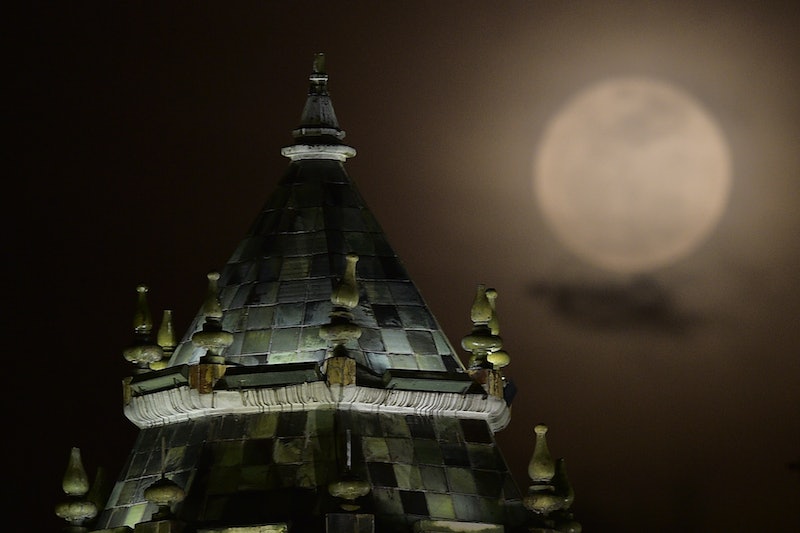 Just when you thought we'd reached peak supermoon, the heavens have done it again, serving us up another breathtaking production of celestial entertainment with yet another very large moon. If you've missed all the others (like me), you'll be wondering when the supermoon in December 2016 is — because unfortunately many of us (you know — those of us who can barely remember to defrost dinner, let alone take 30 seconds to stop and take a look at what's happening in the sky above us), this one is the final supermoon of the year. I for one certainly don't want to miss it, so here's what you need to know.

As you may already know, November's supermoon was so awesome, it was downright historic; it was the closest full moon of 2016 and, the closest full moon in the 21st century, and the biggest supermoon we'd seen in nearly 70 years. While perhaps not as momentous, this month's Supermoon will be taking place on Dec. 14 — although NASA reports it still will be special, albeit for a different reason: it’s going to obscure the view of the Geminid meteor shower, which is also peaks on Dec. 13 and 14. Writes NASA, "Bright moonlight will reduce the visibility of faint meteors five to ten fold, transforming the usually fantastic Geminids into an astronomical footnote. Sky watchers will be lucky to see a dozen Geminids per hour when the shower peaks. Oh well, at least the moon will be remarkable."

All this supermoon talk had me wondering if supermoons had just been in the news more, or if there had just been a spike in occurrences as of late. It turns out that supermoons aren't as uncommon as you think; on average, there are four to six supermoons per year. However, 2016 has definitely been on the higher end of the range, with six occurring by the time we bid the year farewell. But three in three months is a pretty high frequency, so if you feel like you've been constantly hearing about supermoons since October... you'd be right.

For the curious, astrologer Richard Nolle is credited with coining the term "supermoon" in an article in Horoscope Magazine in 1979. Nolle described the spectacular sky event as, “A new or full moon which occurs with the moon at or near (within 90 percent of) its closest approach to Earth in a given orbit.” Nolle's definition holds that a supermoon must be 361,524 kilometers (224,641 miles) from Earth to qualify as truly "super." And of course, the closer proximity to our planet is what makes the moon appear wider and larger and so much more Insta-worthy than usual.

Let's hope it's clear skies all around on Dec. 14. Happy moon-watching!