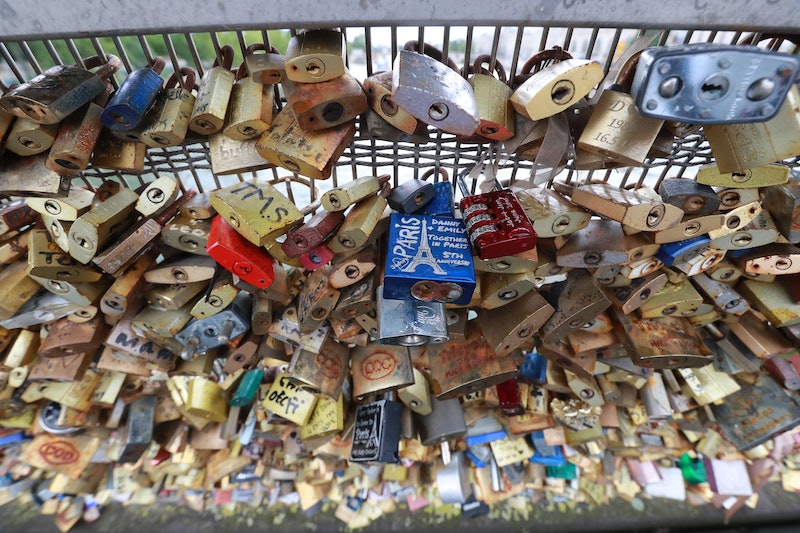 Paris is often known as the City of Love. Now, city authorities are hoping to spread that love by selling "love locks" on the Pont des Arts in Paris starting in early 2017 and using the money to help refugees who have settled in the city, according to The Local via Conde Nast Traveler. Paris has been at the forefront of welcoming and assisting thousands of refugees throughout the migrant crisis in Europe, and this new "love lock sale" is just another way the city is leading by example.

Love locks are part of a tradition in which couples write their names on two separate padlocks and then hook them onto Paris' Pont des Arts bridge, which is located near the Louvre Museum. The tradition has been replicated in other cities around the world, including Seoul, Korea and Moscow, Russia. Unfortunately, the locks on the Pont des Arts have become something of a hazard, despite their heartwarming message; in 2014, a railing on the bridge began to collapse under the wait of all the locks, leading to the removal of around 45 tons' worth of locks (that's one million individual locks, y'all!) in 2015. An activist group called No Love Locks spearheaded the campaign to get the locks off of Pont des Arts — and recently, the group expressed its approval of the city's move to sell the locks instead, according to The Local. (Bustle has reached out to No Love Locks for comment.)

Update: No Love Locks co-founder Lisa Anselmo tells Bustle by email, "This is an example of real selfless love in action, and comes at a time when so many are turning their backs on refugees. It's a strong statement Paris is making, and a beautiful and meaningful end to the story of the locks, which caused so much damage to Paris' beloved Pont des Arts, and created so much heartbreak for Parisians."

Earlier: As a lifelong sappy romantic, I found it a little sad that the love locks had to be removed. But, honestly, the idea of selling thousands of locks and using the proceeds to support local refugees is a much better alternative than just throwing them away. In a recent press conference, Paris's environmental chief Bruno Julliard said that the locks will be sold at an affordable price and that people will be able to buy individual padlocks or even locks in bulk if they want, according to The Local.

The lock sale could rake in as much as $107,000, depending on exactly how many locks get sold in the end. The rest of the locks that go unclaimed will be melted or sold for scrap, which sounds like a sad fate to me. I'm hoping that they're going to be available online so I can get in on the sale as well, although the specifics of the sale aren't yet available. At the moment, Paris authorities haven't mentioned any specific refugee support organizations that they plan on donating the money to, although there are plenty to choose from (like Singa).

Given that this has become a citywide effort to provide assistance to hundreds of refugees who are just settling in or who have been in Paris for some time, I'd like to see more governments on the local, state and national level providing creative ways to do good and support other communities that may be marginalized around the world. Paris's love lock sale is not only an act of love, but also a powerful symbol of global solidarity — something we could definitely all use more of.