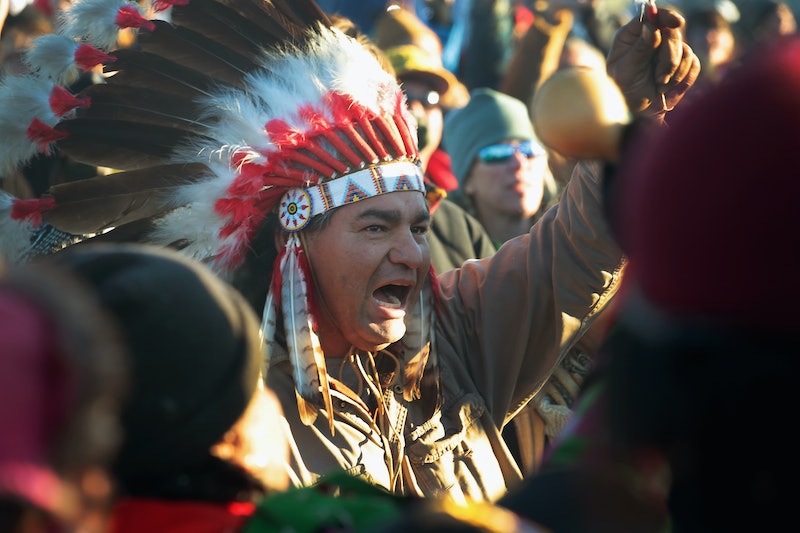 As the sun set on Sunday, Dec. 4, the U.S. Army Corps of Engineers announced that it would not grant permission for the Dakota Access Pipeline (DAPL) to drill underneath Lake Oahe in North Dakota, the site of a months-long protest led by the Standing Rock Sioux tribe. As the news ricocheted around the camp, the Internet, and the world, celebrations broke out among indigenous people and their allies opposing the pipeline, who call themselves water protectors. While the unexpected announcement is indeed a victory in the ongoing battle to protect a central source of water and, as Native organizers have proclaimed, to "defend the sacred," the struggle for safety and sovereignty at Standing Rock is far from over. Despite widespread (and well-deserved) celebration, DAPL has not been halted permanently, and that means there is more work to do.

Less than 12 hours after the Army Corps announced that it was denying Energy Transfer Partners and Sunoco Logistics Partners (the companies backing the $3.8-billion pipeline) the easement to cross Lake Oahe, the company issued a statement dismissing the Army's decision as "purely political," and noting that ETP "fully expect[s] to complete construction of the pipeline without any additional rerouting in and around Lake Oahe."

The denial of the easement doesn't end the pipeline construction, though, as stakeholders will explore "alternate routes" to complete the pipeline. President-elect Donald Trump has said that he supports the completion of DAPL — and he reportedly has invested in several of the companies that stand to benefit from the pipeline's completion.

Although the Army Corps denied permission to drill under Lake Oahe, the company stated that it plans to continue with the pipeline's planned path, which water protectors say stretches across sacred burial grounds and through territory never ceded by the Sioux after the Treaty of 1851. Continuing to build the pipeline without an official easement from the government would trigger fines against ETP, but the financial impact might not be enough to stop the pipeline, which is approximately 75 percent complete.

By Monday afternoon, as a brutal blizzard descended on Standing Rock, reports from the ground indicated that DAPL workers were still drilling despite Sunday's news. Water protectors, including an estimated 2,000 U.S. military veterans who traveled to North Dakota to serve as "human shields," were urging demonstrators not to leave the camp, contrary to a statement from Standing Rock Sioux Chairman Dave Archambault, who told the protectors to go home, as "their purpose has been served."

Numerous water protectors told Jezebel that they have no plans to leave the encampment — at least not until all DAPL's drilling equipment has vanished from the plains, as well. "Plenty of people are staying," U.S. Army veteran Philip George told Jezebel. George reportedly arrived at Standing Rock on Sunday with a platoon of 50 other veterans. "This isn't just about a pipeline. It's about everything that's been done to us. The first people of this land need an actual say in what's going on in this country."

So, what can you to do support the Standing Rock Sioux and their allies in this ongoing fight? Start by signing up for updates directly from tribal leaders and organizers and to receive first-hand reports from the front lines. As water protectors brace themselves to endure the brutal weather and sub-zero temperatures of the North Dakota winter, they are still in need of supplies and financial donations. Find specific details of what's needed, and ways to make direct financial contributions, at the Camp of the Sacred Stones website, the official portal for the Native-led resistance to the pipeline.

In a statement issued Monday morning, indigenous leaders stressed that the Army Corps' easement denial signals a momentary victory, but added that "the fight is not over." Supporters should keep sharing news about Standing Rock on social media, and continue pressuring their elected officials to oppose the pipeline. That will be especially important as the new administration takes office next month.

"This is a victory for organizing, and it doesn't stop now," said Dallas Goldtooth of the Indigenous Environmental Network in a statement. "We are asking our supporters to keep up the pressure, because while President Obama has granted us a victory today, that victory isn't guaranteed in the next administration. More threats are likely in the year to come, and we cannot stop until this pipeline is completely and utterly defeated, and our water and climate are safe."

You can find local anti-DAPL actions and learn about concrete ways to support the indigenous-led movement by joining #NoDAPL Solidarity, a platform designed for non-Native people to offer meaningful, culturally competent support.