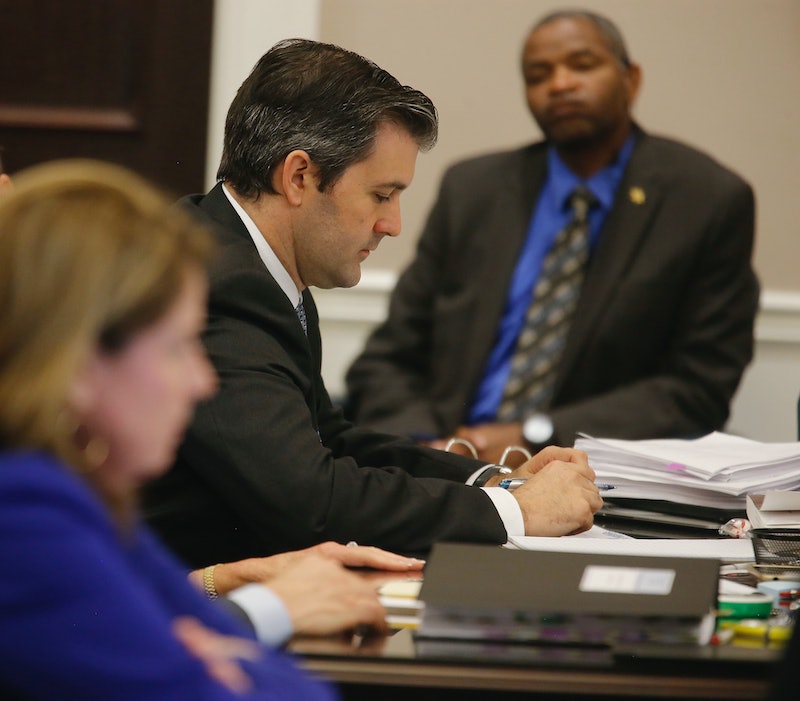 A South Carolina jury was unable to reach a verdict in the trial of former South Carolina police officer Michael Slager, who fatally shot unarmed black man Walter Scott in the back as Scott fled the scene of a routine traffic stop last year. The jury was deadlocked, prompting the judge to declare a mistrial in the Walter Scott case, the Associated Press reported. The deadly interaction between Slager and Scott was captured on video filmed by a bystander in April 2015, and appeared to show Slager shoot the 50-year-old man several times in the back as Scott ran through a park. Slager was fired from the North Charleston Police Department, subsequently charged with murder in state court, then indicted by a federal court for depriving the victim of his civil rights, obstruction of justice, and unlawful use of a weapon during the commission of a crime. Slager has defended himself, stating that he shot Scott in self-defense.

The mistrial announced Monday was in the state murder trial, wherein the jury was reportedly deadlocked because of one juror who "could not in good conscience" find Slager guilty of murder or manslaughter (a lesser offense that does not require proof of "malice aforethought"). The jury spent more than 20 hours deliberating the verdict over four days, according to Greenville, South Carolina NBC affiliate WYFF.

According to that local station's report, the jury asked Circuit Judge Clifton Newman for several clarifications about legal definitions of key terms, "including imminent danger, malice aforethought, provocation and self-defense." After a recess, the judge returned to the courtroom around 12:30 p.m. Monday and delivered a written statement to the jury (comprised of 11 white jurors and one black juror), after allowing attorneys for the defense and prosecution to review his response.

"The judge’s response to jurors included telling them that they cannot convict Slager of murder or manslaughter unless the charge has been proven beyond a reasonable doubt," WYFF's managing editor Carla Field wrote in her report. "The response also said that if the defendant believed he was in danger because of some provocation by the victim, it could have induced the heat of passion."

Judge Newman's letter went on to explain that the jury could only find that Slager had acted in self-defense "if a person of normal prudence and courage [would have] felt in danger," according to Field. A conviction for murder, Newman added, requires consensus within the jury "beyond a reasonable doubt" that Slager "acted with malice aforethought."

Now that a mistrial has been declared, Slager will likely face another trial with an entirely new jury. Slager has yet to face trial for the federal charges against him, and while an attorney representing the Scott family said the mistrial was a "missed opportunity for justice," he seemed confident that the case would not yet be put to rest.

“[Slager] may have delayed justice, but he did not escape it,” Scott family attorney Chris Stewart told The Washington Post. He's optimistic that a different jury will convict Slager. "He dodged it by a hair, and he's not dodging it again," Stewart said.