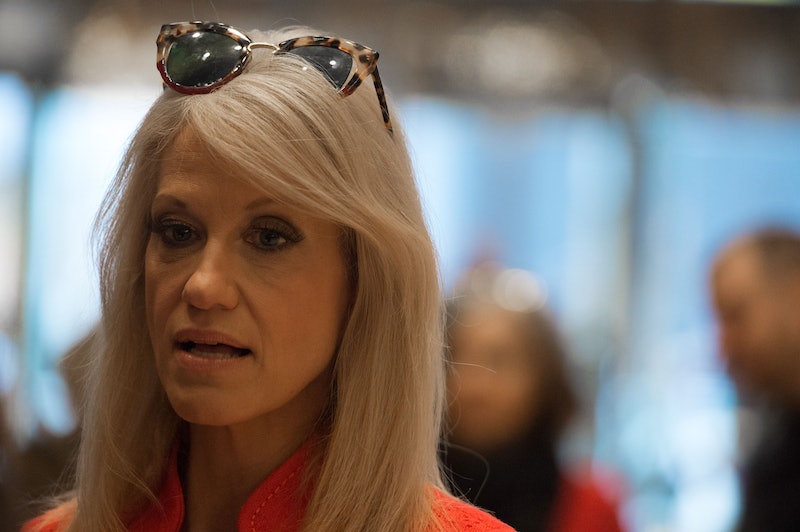 Kellyanne Conway, Donald Trump's third and final campaign manager, earned a reputation as a spin master over her tenure. She has mastered the craft of pivoting away from unfavorable questions, and is credited with having a large hand in getting Trump elected. She has said many questionable things in her efforts to defend Trump throughout his campaign, but some of Conway's most problematic comments have been about sexual assault.

In October, a 2005 hot mic tape from an Access Hollywood shoot surfaced. In it, Trump is heard making lewd remarks about women and alluding to committing sexual assault. Shortly thereafter, multiple women came forward with their own stories of Trump's sexual advances and aggression, all of which Trump consistently denied, saying "I am a victim of one of the great political smear campaigns in the history of our country."

Conway was committed to doing her job, which was making Trump look good. But the ways in which she defended him against the sexual assault accusations were problematic. As you'll read below, in one instance, Conway said Trump was "gracious and a gentleman" to her (and therefore couldn't have sexually assaulted people?). In another, she argued that some of his critics have done worse, saying (though not naming specifically) that some "rubbed up against women and... have put their tongues in their mouths, uninvited.” And just last week, she reportedly told a teenage girl that the girl was just trying to "make news" when she asked her at a panel how she reconciled being a woman and working for Trump.

The Access Hollywood tape leaked just days before the second presidential debate. And in an interview with CNN's Dana Bash at the debate, Conway defended Trump against the accusation that he was talking about sexually assaulting women on the tape. Her defense: He never actually said the phrase "sexual assault," so that couldn't have been what he was talking about. "That's a very unfortunate phrase and people really should stop using it... He did not say the word sexual assault," Conway told Bash. What Trump did say was, “And when you’re a star, they let you do it... Grab them by the p*ssy. You can do anything.”

2. Trump Has Been "Gracious And A Gentleman"

In that same interview with CNN's Bash, Conway said, "This is a man I’ve been alone with many times who’s never been anything but gracious and [a] gentleman and elevated me to the top level of his campaign." The reasoning here being, well, what exactly? Trump never sexually assaulted me, so how could he have allegedly sexually assaulted anyone else? Trump has consistently and adamantly denied the accounts of the women who have accused him of sexual assault.

3. It's Not As Important As The Economy Or ISIS

Last week, Conway participated in a panel at the University of Virginia. A high school student there asked Conway about Trump's sexual assault allegations: “How do you rationalize that as a woman and also as his campaign manager?” According to The Hill, Conway responded, "Women are tired of the same argument and the same thing you are presenting to me right now," and added "I'm glad that people looked at [those attacks] and said, 'You know what? That's an argument that will not create a single job in my community, not bring back a single of the 70,000 factories that have been closed, will not deter one member of ISIS from doing their bloodletting here or anywhere else in the world.”

4. "You're Just Trying To Make Headlines"

At that same panel, Conway went on to scold the teenager for asking her the question, and accusing her of doing so just for attention. She said, "For you to use sexual assault to try to make news here I think is unfortunate, but it also doesn't matter because Donald Trump promised he’ll be a president of all Americans." From my perspective, this plays into the problem that women do not come forward to speak about sexual assault, because they are afraid of how they will be perceived.

5. Members Of Congress Are Just As Bad

In October, while dealing with the blowback from the leaked Access Hollywood tapes, Conway said in interviews on MSNBC and Fox News that the Republican lawmakers that had withdrawn support from Trump. She told MSNBC's Chris Matthews, "I would talk to some of the members of Congress there when I was younger and prettier, them rubbing against girls, sticking their tongues down women’s throats who were uninvited, didn't like it." She added, "some of them, by the way, are on the list of people who won’t support Donald Trump because they all ride around on their high horse.” Conway similarly told Fox News' Megyn Kelly, “There are members of Congress, current and former, who have rubbed up against women and who have put their tongues in their mouths, uninvited." Now, obviously, if that is true, that should not be dismissed. But to use other people's allegedly reprehensible behavior as an excuse for Trump's is equally abhorrent, from my perspective.

6. Rape Happens Because Women Are Physically Weaker Than Men

On a PBS show in 2013, Conway said that if women and men were physiologically the same, strength-wise, rape wouldn't occur. According to a CNN report from this year, Conway said during PBS' To The Contrary, "If we were physiologically — not mentally, emotionally, professionally —equal to men, if we were physiologically as strong as men, rape would not exist. You would be able to defend yourself and fight him off." For me, this is an extremely problematic way of thinking, because it puts the onus for preventing rape on the women who are being attacked, and not the men who shouldn't be attacking them. Arguably, It's a broader method of blaming the victim.

7. All Victims Should Be Believed, Except For Those Accusing Trump

In October, Hillary Clinton tweeted that "every victim of sexual assault deserves to be heard, believed and supported." Conway retweeted Clinton, saying "RT if you agree. 'Every' is the operative word here" — a remark that was widely believed to be referring to the women who accused Bill Clinton of sexual assault when he was president. But when Trump's accusers began to come forward, Conway denied their stories and painted those woman as opportunistic.

It's undeniable that Conway is successful at what she does. But Conway will need to reconcile the lengths she went in her rhetoric to get Trump elected.