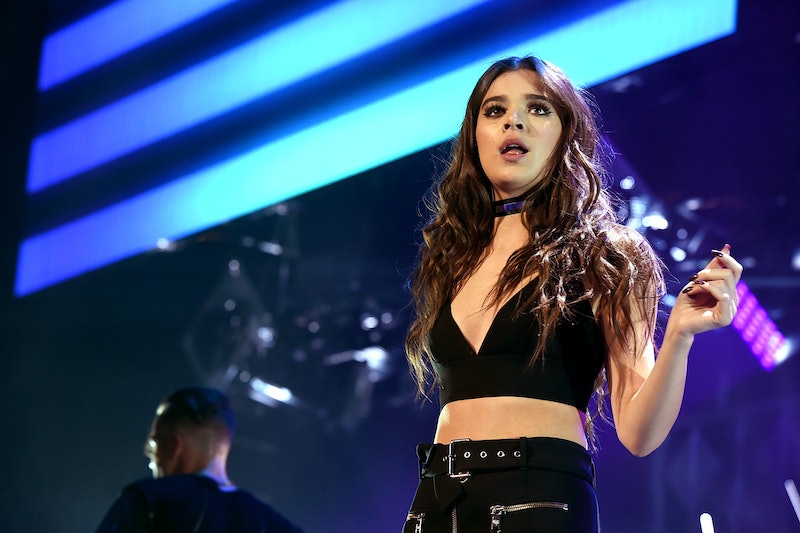 Hailee Steinfeld is an Academy Award-nominated actor, pop singer — and next, she'll add host with the most to her already accomplished resume. Hailee Steinfeld will host and perform the 2016 Billboard Women In Music Awards on Dec. 9, according to Billboard. The 19-year-old is truly the perfect choice to take on this gig. Currently, she stars in the critically-acclaimed teen comedy The Edge of Seventeen, has hit songs like "Starving" and "Love Myself" on the charts, and let's not forget how she earned an Oscar nod at age 13. Her success across multiple industries makes her the perfect candidate to host an event about the contributions of women in entertainment.

The wunderkind hit teen stardom success when she acted alongside Jeff Bridges in the 2010 film True Grit. Her role was a deeply emotional one — not something most young teens could pull off — but Steinfeld managed to not only do so, but also garnered an Oscar nomination for her performance. She's continued to be prove herself by becoming somewhat of a pop sensation with hits like a popular cover of Pitch Perfect 2's "Spotlight" and her own single "Starving" which recently hit No. 13 on the Billboard Hot 100.

Steinfeld will join the other women who are being honored, which include Halsey (Rising Star award), Allesia Cara (Rule Breaker award), Andra Day (Powerhouse award), Meghan Trainor (Chart-Topper honor), Maren Morris (Breakthrough honor), and Kesha, the winner of the Trailblazer award. Vanguards of their individual genres Madonna and Shaina Twin will also be honored as Woman of the Year and Icon honree, respectively. I can't think of a more suited actor/singer to stand among such celebrated women.

Steinfeld told Billboard that she is honored and excited that she has been given the opportunity to share the stage with these inspiring women. “I’m really honored that Billboard asked me to host and perform at this year’s Women in Music," she said. "The event empowers women in the music industry and spotlights their achievements in a wonderful way. It’s going to be a great show!”

Since pretty much everything Steinfeld touches seems to turn to gold (or at least gold-nominated), she is and is certain to bring some of her on-point showmanship, sparkle, and charm to the event. The Billboard Women in Music Awards will air on Lifetime on Dec. 12, so soon we'll get to see just how bright this young star shines once again.

More like this
Is Megan Fox Pregnant? MGK Gave A Shout-Out To Their “Unborn Child” Onstage
By Hugh McIntyre
Stormi Just Walked A Red Carpet With Mommy Kylie Jenner & Daddy Travis Scott
By Hugh McIntyre
Doja Cat Wore Surrealist-Inspired Schiaparelli To The BBMAs
By Dominique Norman
Spice Girls’ Net Worth: The Richest Member Is Wealthier Than The Rest Combined
By Hugh McIntyre
Get Even More From Bustle — Sign Up For The Newsletter