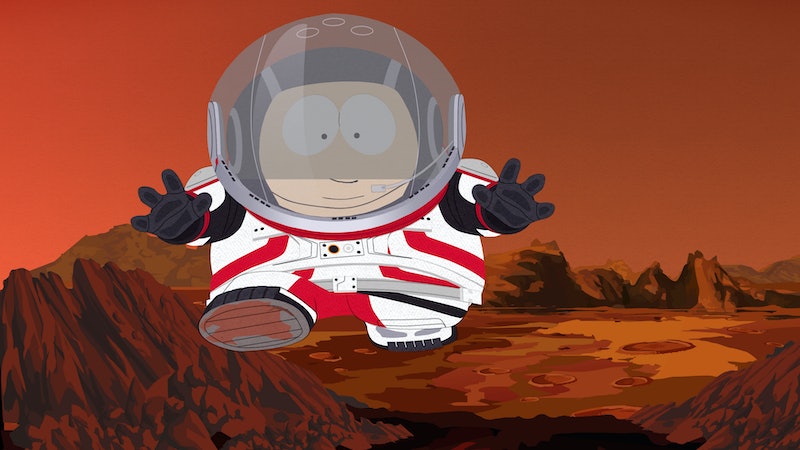 In a world where every news story seems even scarier than the last, it can be difficult to find some levity. Luckily, we've been able to count on South Park to poke fun at the issues of the day, from pop culture to politics to society, for 20 seasons. But as you prepare to bid the Comedy Central series' 20th installment adieu when its season finale airs on Wednesday, Dec. 7 at 10 p.m. ET, you've got to wonder if South Park will return for Season 21, don't you?

In these uncertain times, that is fortunately one question we already know the answer to. In fact, we've actually known it for a while. Comedy Central renewed South Park through Season 23 back in July 2015. That means there will be new episodes of South Park in the world through at least 2019. By that year, the series will have aired its 304th episode, according to the press release announcing the news last year.

However, when exactly Season 21 of South Park will premiere seems a little less uncertain right now. That announcement came with no official premiere date listed for next season, and Comedy Central has yet to reveal when we can expect the next installment to hit the network since then. But the last several seasons of the show have debuted in September, according to TV Guide, so it seems likely that South Park will be back sometime in September 2017.

Hopefully, as we get closer to whenever that Season 21 premiere date is, there will be more information available about what we can expect from the next installment of South Park. Right now, it looks like all of the anticipation is built up over what will happen in the Season 20 finale, which has been teased to feature the aftermath of TROLLTRACE's launch, Cartman trying to convince SpaceX scientists that heading to Mars is a bad idea, and the kids banding together to save the world from complete and utter destruction. Something for everyone!

It'll be interesting to see if South Park continues its fairly new serialized format, which the series began in Season 19. Instead of each episode featuring a self-contained story, as the series had operated in the past, there's a narrative through line in the season, and each subsequent episode builds upon the one before it. This season focused on how a presidential election and Internet hackers affected the titular Colorado town. With the Season 20 premiere becoming the show's highest-rated episode since 2006, according to Comedy Central, I'd say South Park's creative team may be willing to give this serialized format another shot.

Clearly, South Park's satire is as fresh and relevant as ever today, too. The series even grabbed headlines right after the results of the real-life presidential election in November. The Nov. 9 episode originally titled "The Very First Gentleman" was quickly re-written to reflect Donald Trump's unexpected win over Hillary Clinton since the South Park writers initially assumed that the former Secretary of State would become the president-elect, according to Variety. The episode was re-titled "Oh Jeez" upon its airing.

And it sounds like when South Park finally ends for good is completely up to Comedy Central at this point. "I think what we said is like, we’re those kids that are never gonna excuse ourselves from the table. We’re gonna wait to be excused. We’re gonna wait to be thrown out," series co-creator Trey Parker told Vanity Fair in response to a question about the plan continuing to be to not end the show until it gets cancelled. "It’s just been a mentality for us—and in a way it’s been a healthy mentality—that we, from the beginning, thought, 'O.K., well, this isn’t gonna last. Any minute now we’re gonna get run out of town.'"

Well, for now, it seems for biting parody on TV, South Park is still the place to be.

More like this
Everything To Know About Marvel's 'Echo' Series On Disney+
By Grace Wehniainen
Will Viewers Revisit Welcome To Eden For Season 2? What To Know
By Kadin Burnett
The Good Doctor Already Added 2 New Cast Members For Season 6
By Brad Witter
Will Vampire In The Garden Get A Season 2? What To Know
By Kadin Burnett
Get Even More From Bustle — Sign Up For The Newsletter