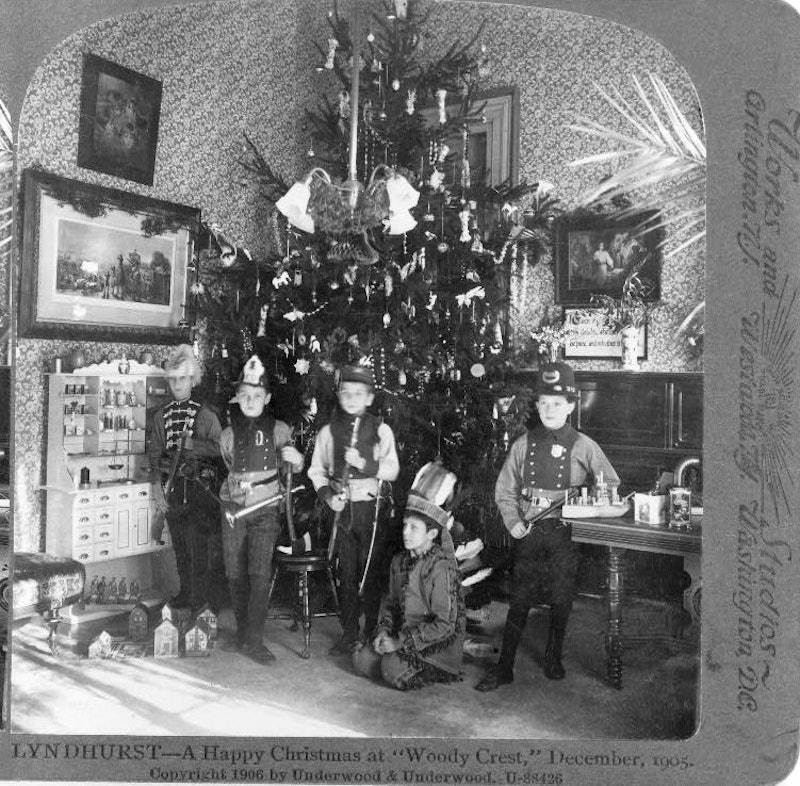 The holidays may feel like they came out of nowhere this year, but they're almost here — and whether or not you celebrate Christmas, it's almost guaranteed that you'll spend this time of year bombarded by talk about Christmas, including historical precedent and ideas about what a "real" Christmas is like. The good news is that, from a historian's perspective, Christmases part aren't just a fuzzy, feel-good nostalgia trip — because American Christmas has had some incredibly bizarre moments. What we view as the "tradition" these days is actually a refinement of decades of different Christmas trends and new concepts, some of which we've kept (Christmas displays at department stores!) and some of which we have, er, deservedly jettisoned (gelatin plum pudding, anybody?)

If anything, tracing the trends and fashions in American Christmas history gives the lie to the idea that there is any clear perfect Christmas from times of yore. What we celebrate these days is a mishmash of European Christian religious custom, Germanic influences, ideas spawned from technological innovation and events in American history, and a bit of enterprising weirdness. What families in the 1910s viewed as a "normal" Christmas would almost certainly be viewed with slight confusion today (and let's not even get into the strangeness of the early 1900s Christmas pickle). It's also an open invitation to make your own new traditions: the way Christmas works, it's entirely possible that a new popular idea may stick around and become part of its fabric over the next 100 years.

Making Your Own Ornaments (From Real Candles & Diamond Dust)

According to History Today, the traditions that make up most of our modern American Christmas festivities really began to get popular stateside in the early 1900s; Americans at the time were following trends from Britain, where celebrating Christmas with a German-style Christmas (with tree) became popular in the mid-19th century, when Queen Victoria married the German-born Prince Albert.

Americans had their own twists on the idea of decorating the tree, though, which evolved as technology did. For instance, glass ornaments flooded in from Germany in the late 1880s, while die-cast ornaments weren't invented until later still. In the time before cheap Christmas ornaments were available en masse, Americans made their own. In the 1910s, they stuck real candles up for lights (electric Christmas tree lights would only really be affordable by the 1920s), and got seriously inventive when it came to ambiance: one guide from the era advises that you could create fake snow for your branches by taking cotton batting, dipping it in thin gum arabic, and then rolling it in diamond dust. Bet your decorating efforts look a bit low-fi in comparison.

As a foreigner, there are a lot of things I do not understand about American culture. The tradition of the Christmas pickle ornament, and the fact that it still persists in some parts of the US, is kind of at the top of the list. If you've never heard of the phenomenon, it seems to have emerged in the late 19th and early 20th century: people bought a glass pickle ornament, hid it somewhere on the tree, and then let children hunt for it; he one who found it received an extra gift.

At the time, many people believed that the idea of a Christmas pickle had come over from Germany, like many other Christmas traditions, and that it was known back home as a Weihnachtsgurke. But it appears that this was complete bunk; Germany's never heard of it. Though different origin stories have been made up for the tradition (a starving Civil War soldier who lived on pickles, for instance), realistically, it seems most likely that an enterprising ornament salesman made it up to sell otherwise understandably unpopular pickle ornaments. Genius.

Teddy bears are one of the sweetest and most traditional gifts to give to children at Christmas, and vintage ones from Steiff & Co are worth a gigantic amount of money. The entire "teddy bear" phenomenon is fairly recent, though: it dates back to 1902, when a president's refusal to shoot a bear became national news. Theodore Roosevelt, known affectionately as Teddy, was apparently on a hunting trip in Mississippi in 1902 when a group of men caught and tied up a bear and suggested he shoot it.

He refused, on the basis that this wasn't "sporting", and a cartoonist in the Washington Post got hold of the story and made a famous cartoon of his refusal. A Russian-Jewish immigrant, Morris Michtom, was inspired to make "teddy bear" toys, and asked Roosevelt to use his name for the idea. The concept took off like wildfire.

The idea of Christmas altruism is a deep part of the Christian tradition, and continues to happen worldwide (homeless dogs in Edinburgh, for instance, will receive their own "Christmas stockings" from donors this Christmas); but in the 1900s, it took its own form. A letter to the prominent paper the Boston Globe advised every person who was buying a paper from a "paper boy" (remember, this was long before child labor laws, and children worked openly throughout the year) "should pay the newsboy therefore five cents", a raise from the normal two cents. "The amount will not be missed by the giver," the writer noted, "and a great good will result."

The famous Christmas windows along New York's Fifth Avenue are part of a tradition that began in the mid-1800s, as the ability to create large panes of plate glass allowed stores to display their merchandise in huge windows; but the idea of getting things festive was specifically an American innovation. According to sources, Macy's was the first to do a proper holiday window display in 1874, but it wasn't necessarily Christmas-y; it contained porcelain dolls and "scenes from Uncle Tom's Cabin," the popular novel of the time. By the 1900s, though, things began to escalate on a grand scale as department stores expanded and shoppers became more discerning. Woolworths records indicate that by 1929, pictures had to be taken of every store Christmas display to send to HQ to make sure that they were absolutely perfect.

One of the most collectible bits of American Christmas history are "snow babies"— tiny glazed bisque figures of children in "snow suits" made of white grout. The idea apparently originated in Germany, where the figures were made of candy, but in America, they flourished as Christmas ornaments. They're tiny and intensely creepy-looking if you're not prepared for happy infants to be hanging on your tree. And, in an intriguing twist, they're also tied to another part of American history: polar exploration.

The popularity of snow baby ornaments shot up in 1909 and the late 1920s, both periods when Americans committed great feats of exploration at the Poles. The real "snow baby" was the daughter of the explorer Robert Peary, whose wife wrote a book, The Snow Baby, in 1901. It's kind of a shame that NASA-themed ornaments didn't become as wildly popular when Neil Armstrong went to space, but hey, there's no snow on the moon.