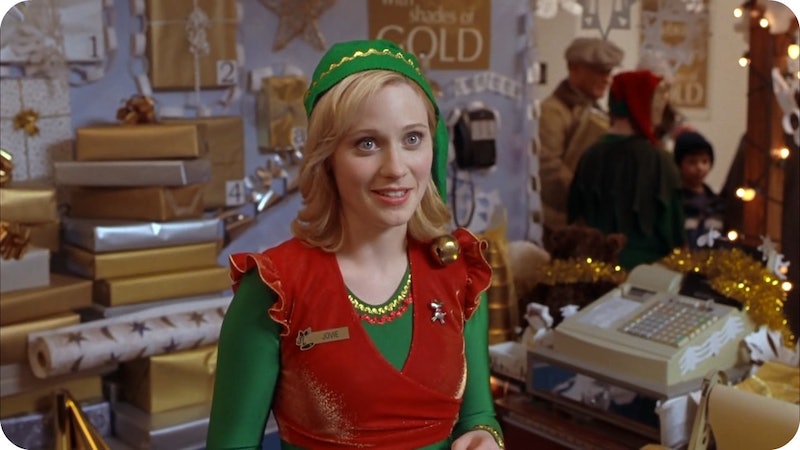 Over the course of the next few weeks, you, Average American Who Celebrates Christmas, will spend approximately $929 on the holidays. You will expect to receive approximately 13.9 gifts from friends and relatives. You will travel about 275 miles to spend time with your family over Christmas, and then you will travel 275 miles back, and come next year you will do the same thing all over again (although, given inflation, you'll probably spend slightly more). All this is to say, we are decidedly predictable when it comes to how we celebrate this holiday, but despite the sameness of it every year, we are often affected emotionally by the holidays — whether for better of for worse.

Whether you get aggressively jazzed for the season or are subject to holiday blues, there's a little bit of an emotional bend for everybody around this time of year. And while there's no magical thing we can universally pinpoint to blame for our own particular feelings about the holiday, there are plenty of overlapping factors that affect the way we experience Christmas. Here are a few of the things at play in the giant snow globe of your brain this December, courtesy of Christmas culture.

Your Brain On Christmas Music

It seems these days that it's impossible to feel ambivalent about Christmas music — you either love it, or it is the worst thing that ever happened to you. But if the proper conditions are set, Christmas music can be used to retailers' advantages. A study found that, when paired with a Christmas-associated scented, funneling Christmas music in a retail situation will make consumers' evaluations more favorable. The scent is key, though — apparently those evaluations actually lower when the scent is taken out of the equation. The study also noted that slower-paced holiday songs in particular inspired people to take their time with their evaluations, and potentially spend more money. So the next time you hear "I'll Be Home For Christmas" and smell pine, keep your wallet close!

Everyone has at least one hometown hero who goes all out with the holiday decorations — lit up trees, blow-up penguins, and reindeer galore. And yeah, you slow down your car to peek at it every time you drive by, but the lights impact more than your commute. People tend to attribute sociability to to homeowners who have visible Christmas displays, even if those neighbors are among the less sociable ones, according to a study. So if you're looking to make new friends in your 'hood, maybe invest in some twinkly things this year?

Most Americans who grew up celebrating Christmas have extremely vivid memories of believing in Santa Claus — and perhaps even more vivid fantasies about discovering Santa wasn't real. But as it turns out, as well-intentioned as the Santa Claus myth is, discovering its falsehood can have long-lasting implications for children. One study that researched white lies parents told their children about Santa or in that same vein revealed that children are more likely to feel "abject disappointment" and mistrust their parents. It may even affect their perceptions of morality.

Holiday Stress Was Not Created Equal

Surprise, surprise — while researchers found that self-evaluated reports of stress were higher across the board for everyone during the holiday season, women clocked in with 44 percent reporting a rise in stress levels, as compared to 31 percent of men. Additionally, only 25 percent of women said they were able to relax during the holidays, versus 41 percent of men. The three main stressors cited in the survey were lack of time, lack of money, and commercialism, but the study's authors speculated that the stress was disproportionately put on women simply because more of the traditional "duties" — arranging family gatherings, gift-buying, etc. — typically fall on women.

Gift-Giving Is Basically A Psychological Minefield

Gift-giving being the awkward experience that it is, it's unsurprising that a lot of factors come into play in our perceptions of giving and receiving. While many studies have demonstrated that people feel happier after spending money on others rather than spending money on themselves, there are certain constraints on what constitutes a "good" gift in people's eyes. For instance, as excited as you are to get that cash money from a gift card, it is perceived as lacking in intimacy — particularly in relationships where the giver and receiver are of equal status (i.e., friend and a friend, rather than an uncle and a nephew).

Another study emphasized that in terms of gift-giving, the quality of the gift is not determined by the price or even the desirability of the item, but rather how the recipient will use it. By this virtue, gifts that serve a purpose, and reflect some understanding from the giver, and more meaningful. But when a gift misses the mark? Men are much more likely to be honest about it, whereas women are more likely to fib. Ah, well — I guess that's what white elephant parties are for!

But The Real ~Reason For The Season~ Is Still, Ultimately, Love

A survey revealed that people do, ultimately, feel more satisfaction and happiness recalling holiday experiences centered around family or religion, rather than consumption of material goods during the holiday's. GROUP HUG, EVERYONE.

More like this
15 Easy Pranks To Play This Halloween
By Emily Kelley and Lauren Grant
10 Stranger Things-Inspired Halloween Costumes For True Fans
By Emma Carey
10 Pumpkin Recipes That Are Way More Creative Than Pie & Lattes
By Rebecca Deczynski and Alexis Morillo
Bennifer, Kravis, & 14 Other Fun Celeb Couples Halloween Costume Ideas
By Emma Carey and Brittany Leitner
Get Even More From Bustle — Sign Up For The Newsletter